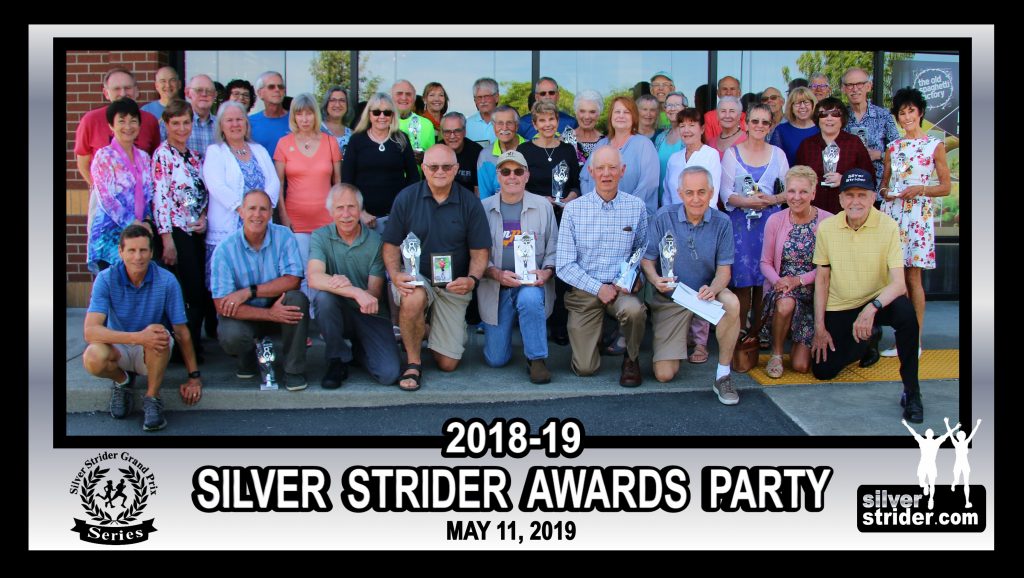 The banquet room at the Old Spaghetti Factory was filled to capacity on Saturday as Silver Striders gathered to celebrate the 9th annual Awards Presentation.

Nancy Larsen arrived early with husband Larry to decorate the room with running themed centerpieces and hand wrapped RUN candy bars as treats for each table.

Allen and Linda Walker set up a photo slideshow of highlights from Silver Strider races and get togethers over the years.

Jerry and Betty Dietrich arranged the impressive 2019 silver victory trophies for display, as well as the special awards, gift certificates, free race entries and prize drawings that would be presented during the program. 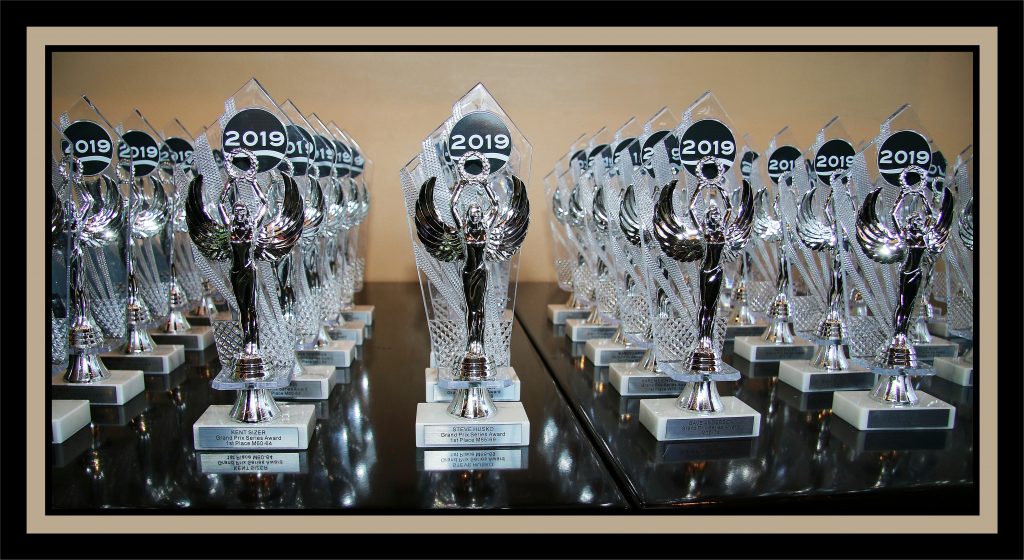 The atmosphere was festive and excitement filled the air as the honorees and their families and friends began arriving at 11:30. The annual Grand Prix Series awards party has been held at the Old Spaghetti Factory for 9 years. The event this year was held at the Tukwila location. The room was spacious, the food was great, and the service tops. 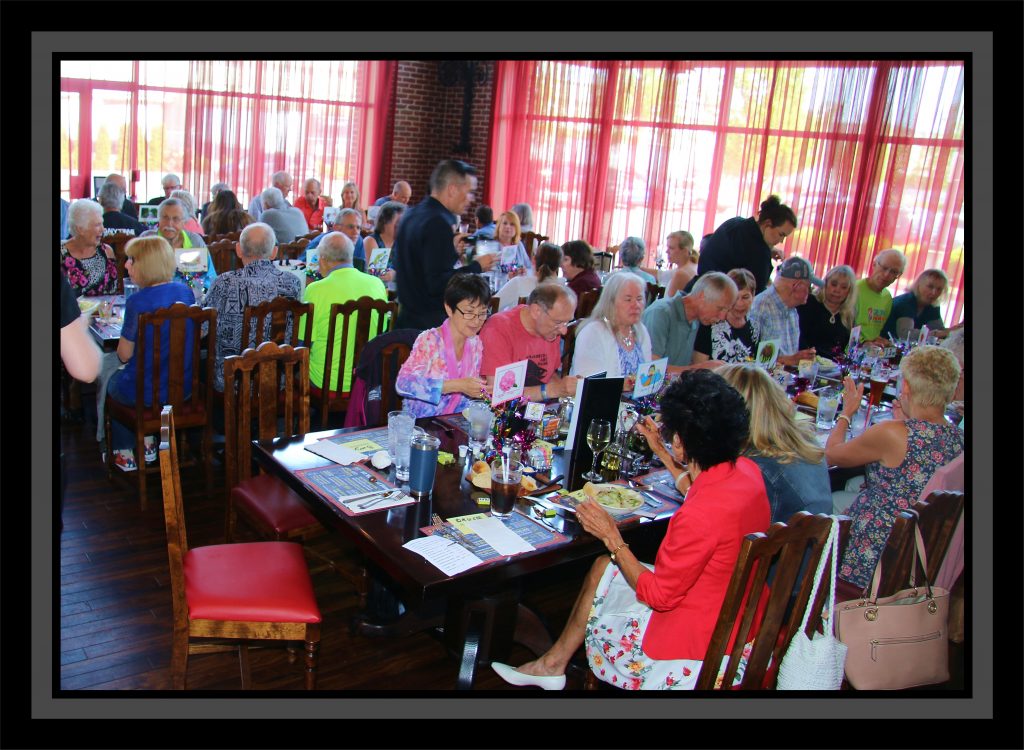 After lunch, Sandra Madden brought out a birthday cake for Dale Hall. It was Dale’s 82nd birthday. 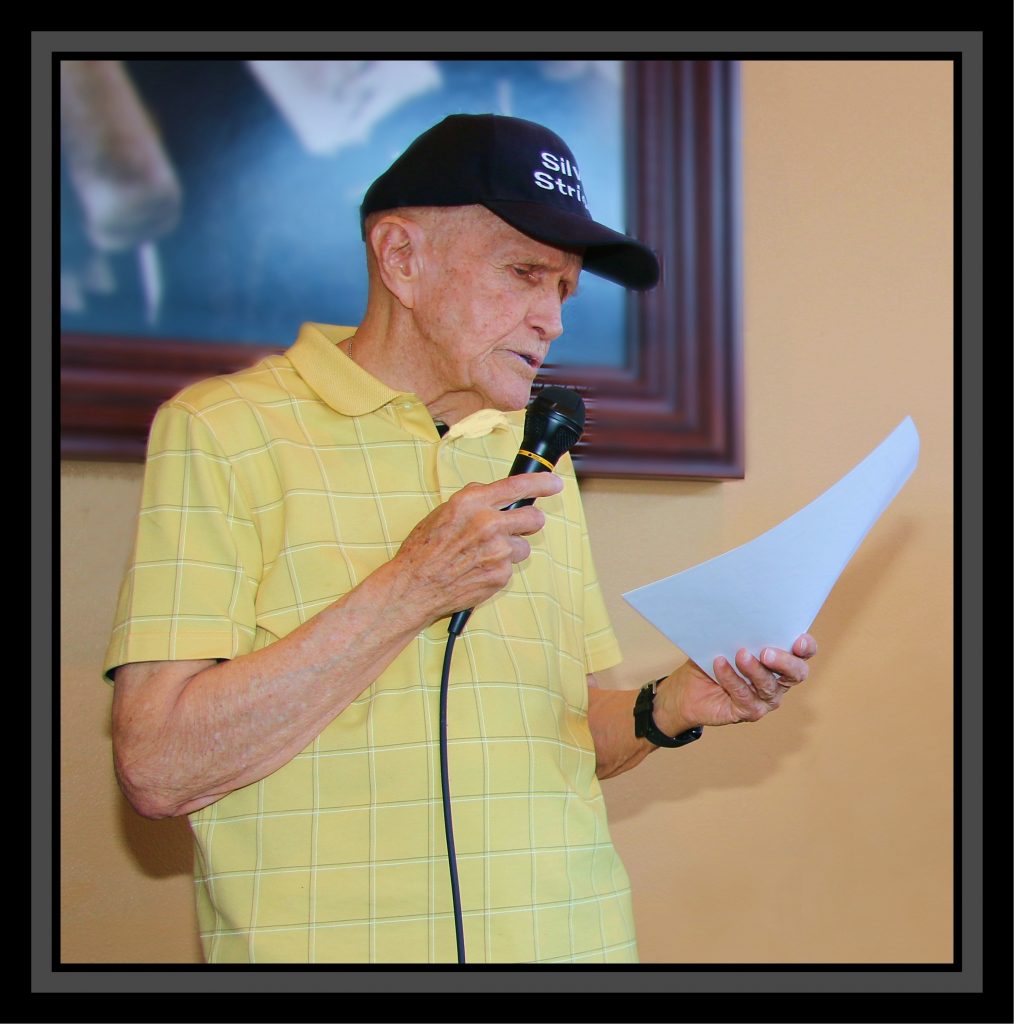 Following lunch, Jerry began his opening remarks by introducing this year’s team of volunteers. Recognition and thanks were then given to KENT BOWL, Dennis Zaborac, title sponsor of the Grand Prix Series. Next to be thanked was the TOP IO title sponsor, SOUTH SOUND RUNNING who contributed shoe certificates to all of the age group winners. Recognition was given to feature sponsors, SHOES-N-FEET in Bellevue, SUPER JOCK N JILL in Green Lake and Redmond, and ROUTE 16 RUNNING in Gig Harbor who have been contributing sponsors for 9 years. WEST SEATTLE RUNNER has been a contributing sponsor for 3 years and this year FLEET FEET OF TACOMA joined the sponsorship program.

Next Heidi Henderson of BeHive Massage Therapy was introduced. Heidi has generously contributed 2 one hour gift certificates to BeHive Massage Therapy for our prize drawings since the Grand Prix Series began 9 years ago. We were delighted to have Heidi and her husband attend the awards banquet this year. Heidi was lucky, winning one of the drawings.

Jerry announced that the awards this year would cover three of the Silver Strider Online Magazine’s programs: The TOP IO, The Century Club and The Grand Prix Series.

He began by introducing the contributors who compile the rankings for the TOP IO: Ed Heckard, David Longmuir (absent), Bob Hoekman and Judy Fisher. Each of these contributors received a Silver Strider hat or visor in appreciation for their hard work. 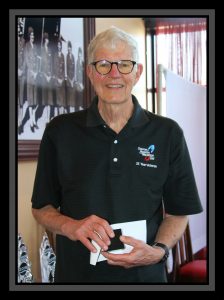 Individual recognition was then given to Bob Hoekman who attained Super Athlete status last year by ranking in the TOP IO at all 4 distances – the 5k, 10k, Half Marathon, and Marathon. Bob was unable to attend the Super Athletes Awards Presentation in January so he was receiving his award at the Silver Strider Party. He was congratulated on his excellent achievement and presented with a Super Athlete ring and a gift certificate from South Sound Running. This was Bob’s 3rd Super Athlete ring!  Bob finished 2018 ranked #6 in the 5k, #1 in the 10k, #1 in the half Marathon, and #2 in the marathon.

Next, the official induction into the Century Club Hall Of Fame was held, recognizing the achievement of those who have finished 100 or more Grand Prix Series races. Bruce Fisher introduced each of the honorees as Judy Fisher, the first runner to be inducted into the Century Club, presented the awards. Those honored were Jerry Dietrich, Betty Dietrich, Arne Hales, Ray Arrington, Steve Husko and Patty Husko. 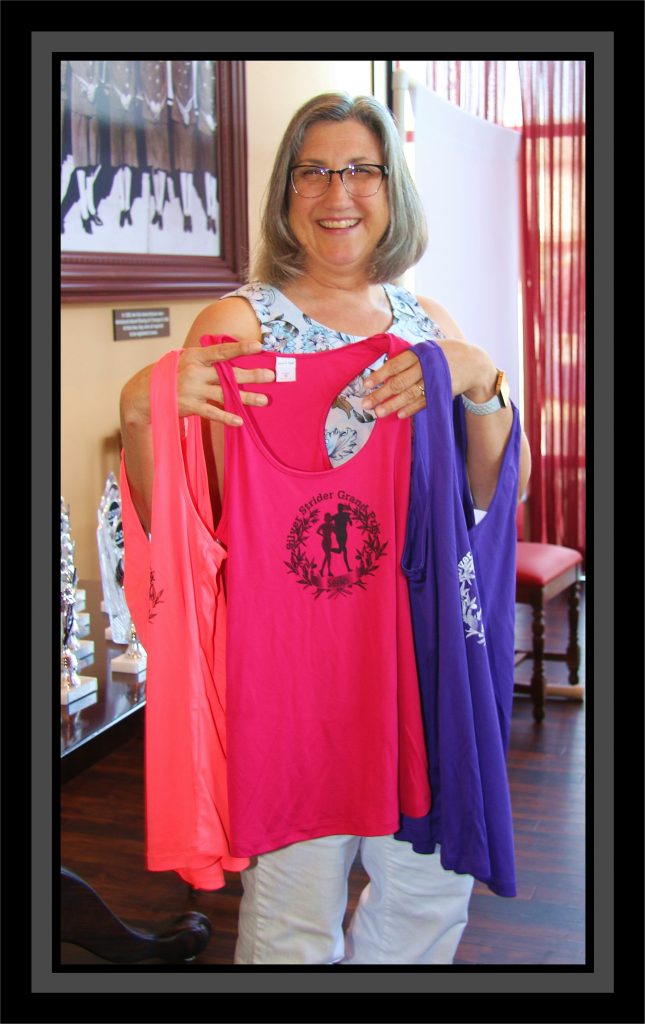 Before beginning the Grand Prix Series awards, Linda Walker announced that women’s Silver Strider singlets are now available. This has been an item of apparel that has been much requested in the past. Linda displayed 3 samples and said she would be taking orders following the awards party.

It was now time to present the the Grand Prix Series awards to this year’s finishers.

Each age group winner received a pair of running shoes from South Sound Running. All of the other finishers received a $50 gift certificate from Shoes-n-Feet, Super Jock n Jill, Route 16 Running, West Seattle Runner or Fleet Feet of Tacoma. To add to the excitement, Jerry donated his running shoe certificate for winning his age division.

The lucky runner, Cherie Langlois, drew the  running shoes instead of a $50 gift certificate.

In addition, every finisher present at the party also received a free race entry to an upcoming Grand Prix Series event:

The awards began with the oldest age group

Jerry Dietrich was the first to receive an award in the Men 85-89 age division.

The Men 80-84 age group had 2 finishers: Roger Dean was 1st with a perfect score of 80 points. Dale Hall in 2nd, finished closely behind with 76 points.

There were 2 finishers in the W80-84 age division: Edythe Hulet was 1st with a perfect score of 80 points, Molly Childs in 2nd place was right on Edythe’s heels with 79 points.

The Men 75-79 age group had 5 finishers: Jerry Bronson 1st, Steve Ramsdell 2nd, Robert Davies 3rd, Larry Larsen 4th, and Jim Dollar, 5th. John Phillips joined the Series too late to be a finisher but was recognized for his remarkable effort. He was presented with a free entry certificate to the Victoria Half Marathon in October. 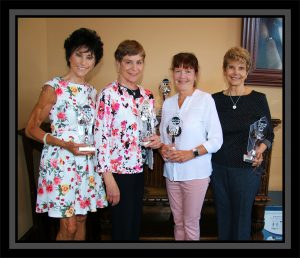 We took a break at this time to conduct the first set of raffle prize drawings. Bruce Fisher, assisted by his daughter Heidi “Mizritha” Schultz, awarded the prizes to the lucky winners. 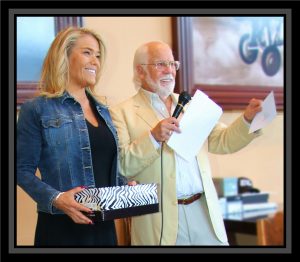 Everyone present was eligible to win a prize. Since there were over 20 prizes to be raffled, 2 separate drawings were held.

The Men 65-69 age group, there were 2 finishers: Steve Husko took honors with a perfect score of 80 points . Tim Oguri (absent) was 2nd. David Crawford ran out of time in the Series, completing 7 races. He was recognized for his effort and good sportsmanship with a free entry certificate to the Victoria Half Marathon in October.

The closest competition was in the Men 60-64 age division. Kent Sizer (absent) won 1st place in a double tie-breaker, with Keith Lerew 2nd. Dave Sherman took 3rd only 3 points back from the leaders. In 4th place, was newcomer, Brett Langlois.

In the Women 60-64 age group, Susan Hall took 1st with a one point lead over Tiare Bailey, 2nd.

This brought us to the presentation of the special achievement awards. With the gale wind and rain at the Tulip Run this year, we almost lost our photographer, Bruce Fisher, so we concluded that we should do something to protect him. To express our appreciation to Bruce for his dedication to the Silver Striders in fair weather and foul, Bruce received a gift certificate for an Under The Weather Photo Pod. The Photo Pod will keep him dry and out of the wind during his long photo sessions at the Grand Prix Series races. 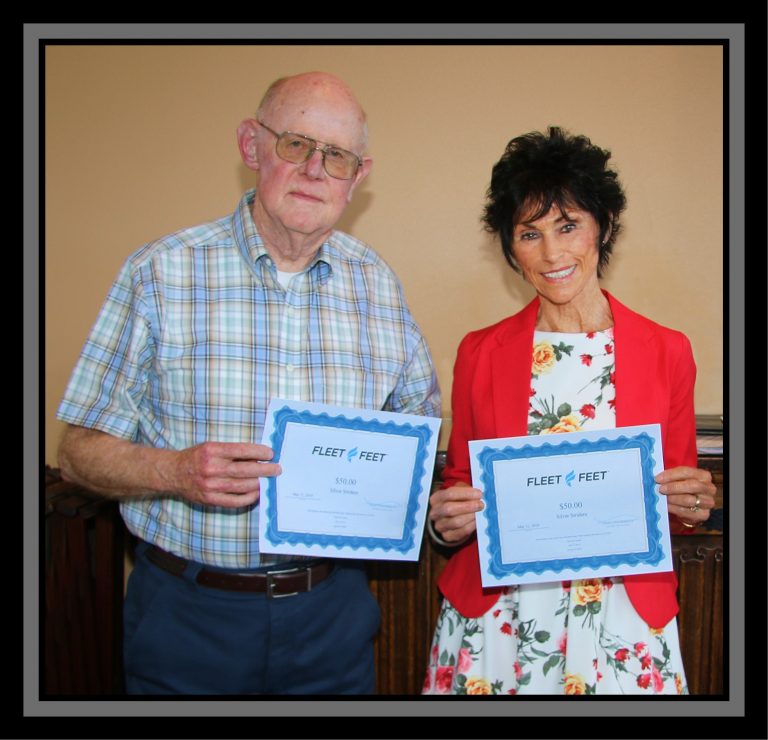 Throughout the awards ceremony, drawings were held for gift certificates to Anthony’s Restaurant, The Blazing Onion Grill, The Old Spaghetti Factory, and Cold Stone Creamery. Gift certificates to BeHive Massage Therapy and free race entries to the Swedish SummeRun were also given.

The final prize each year has been an overnight stay in a fireplace, jacuzzi suite at the Wesley Inn in Gig Harbor. The winner of the coveted Grand Prize Drawing this year was Robert Davies.

Judy Fisher was then asked to come forward again. It was time to present the prestigious Sandra Madden Award. This award can only be claimed by someone who finished every race in the Grand Prix Series throughout the year. All 27 of them! Including the final race of the series, the Tacoma City Marathon. Judy Fisher, age 75, achieved this goal and earned the Sandra Madden Special Achievement Award for Exceptional Performance. Judy proudly accepted the award from Sandra Madden.

As the party drew to a conclusion, everyone eagerly awaited the announcement of who would be named the Silver Strider of the Year – the highest honor in the Grand Prix Series program.

Silver Strider Of The Year

One person stepped forward and volunteered to assume overall responsibility for the program.
That person was Allen Walker.

Allen had already come forward during the year and volunteered to update the Grand Prix Standings. He created spreadsheets and took over the challenging task of tracking two GP Series. A few weeks ago, he volunteered to put together a slide show for the Silver Striders to enjoy at the party. Without being asked, Allen has demonstrated his dedication, hard work and commitment to the Silver Striders.

When it looked like the Grand Prix Series was coming to an end, Allen came to the rescue. Thanks to Allen, there will be a Grand Prix Series in 2020. We can think of no one more deserving to be the 2019 Silver Strider Of The Year than Allen Walker! 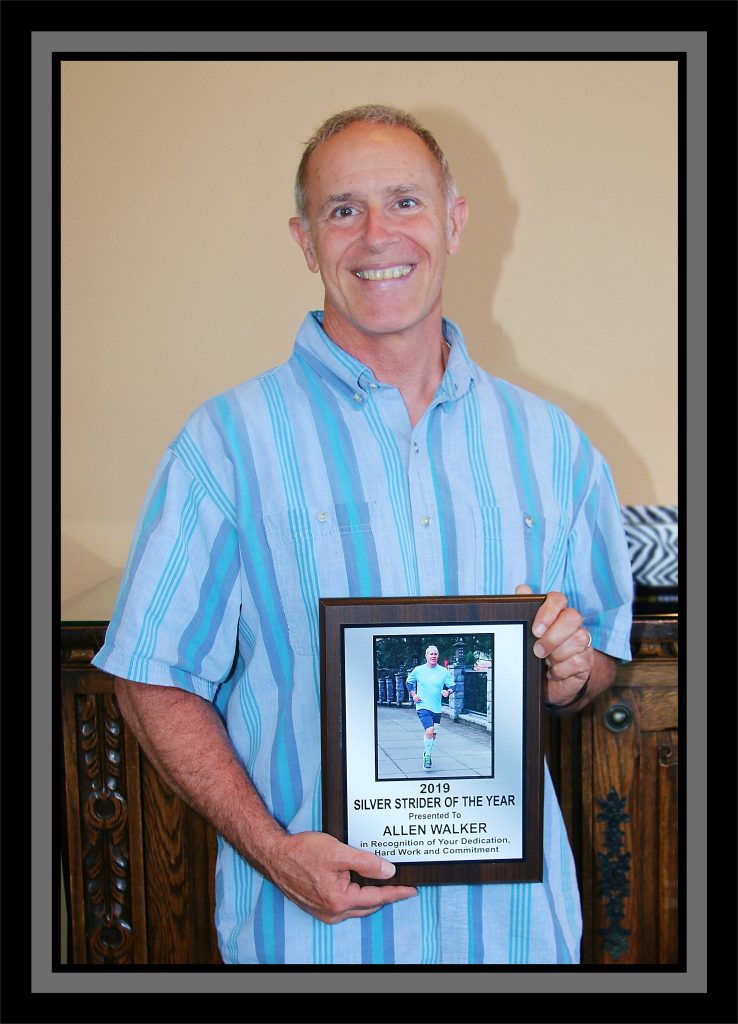 The dress at the party was varied.  I noticed a variety of shirts from different races. But, only one person at the party wore the Grand Prix Series shirt.
Checking further I found that that same person wore the neon Grand Prix shirt at every single race he ran during the year.
He was truly Mr. Public Relations for the Silver Striders during 2018-19 Grand Prix Series