Brought to you by

by Karen Lichtenstein
with photos by “The Hot Flashes”

Not many people signed up for the individual race from Clarkston to Cape Disappointment, but there were relay teams from all over the world participating in either the 8-day or 3-day race.

Kaye V. and I joined a women’s over 40 relay team which was called the “Hot Flashes,” and we started training for three consecutive days of racing. We were told that we would have to provide our own water and supplies because there would be no aid stations and no water stops. Our team brought plenty of food for our lunches, lots of candy and snacks, and cases of bottled water for the race.

Unfortunately, on the first day of racing the supplies had not been distributed to all the support vehicles for our team. I was running my first leg of the relay, and Kaye V. gave me a bottle of sparkling water because that was all we had in the car. I swallowed lots of foam with a little water, and I promised myself that we would get some of the regular bottled water for the next day.

Our team captain was not fast but she could run the same pace uphill or downhill so she took the longest, steepest uphill leg for the first day of racing. As you can see in the picture, she even enjoyed the uphill climb.

Our team name, the “Hot Flashes,” attracted a lot of attention and laughs.

After the first day of racing, we were approached by a runner from New Zealand. He took off his shirt and offered to trade the shirt for a Hot Flashes T-shirt. He wanted to give his wife one of our T-shirts. That was a great idea, but we needed our shirts for racing so we offered to take his address and mail him a T-shirt later. We ordered a custom T-shirt in his wife’s size and mailed it to New Zealand.

On the second day of racing, Kaye V. and I had plenty of water in the car so we could stay well hydrated. You can see from the picture of Kaye V. that she is happily carrying the baton in one hand and a cup of water in the other hand.

One of the other relay teams was a team from the Department of Social and Health Services (DSHS). I was working for DSHS at the time so I knew all the runners on that relay team. I had beaten their runners on the first two days so they had a plan. They told me that Roger Gantz was going to race against me on the third day. The final  leg that we would be running was an 11 mile stretch.

The first 5 miles covered a long uphill climb followed by a steep 1 mile downhill, then the race course was very flat for the final 5 miles.

I was hoping that Roger would receive a baton and start before me, but my team arrived first so I had a one minute head start. As I ran up the hill, Roger raced to close the gap. His DSHS team was cheering loudly, and my teammates told me “He is trying to catch you.” I was not worried because it was very hot with no shade, and my goal for the first 5 miles was to stay well hydrated and not go out too fast. I was still in the lead when I reached the top of the hill, and I accelerated downhill as fast as I could.

I reached the long flat stretch, and only one person passed me on that 5-mile stretch. The man from New Zealand was incredibly fast, and he passed me quite easily.

After I finished my race, I waited for Roger, and he was six minutes behind me. 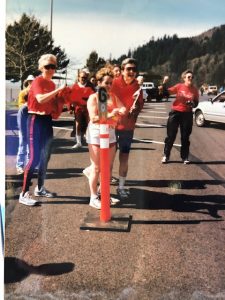 After three consecutive days of racing, we were exhausted and not thinking clearly. I told Kaye V. that she should drive because I was tired. As we sat in the car, one of our teammates was standing by the open car door and talking to us. Kaye V. started to drive away, and I told her to stop immediately. I took the car keys away from Kaye V. and told her that I would drive.

Not long afterwards, one of our teammates asked Kaye V. to drive her car while she raced. Kaye V. said “I don’t think you want me to drive since Karen took my keys away.” We all laughed, and we found a different driver for our teammate.

After the race, there was an awards ceremony, and the Hot Flashes won first place in our age category. Governor Booth Gardner was introduced, and he told us that he knew we were tired so he would be brief. We all cheered and applauded. He understood just how exhausted we were.