It started in the summer of 2005. Steve turned to me and asked if I would like to join some of the group going to run the Marine Corps Marathon in the fall. I had been running with the group for a little over a year. We had run United We Run marathon in November and the Green River marathon in June. I had learned a lot from the Portland marathon in 2000 where I started too fast and walked the last 3 miles in a lot of pain.

My first marathon was the Marine Corps marathon in 1991 where I had run 2:55 at the age of 37. This was accomplished by following the advice of a good running friend while on assignment at Lockheed in Atlanta. By chance I saw him at the Portland marathon where he handed me a card with his website on it.

He had retired and was coaching amateur athletes part time. He was good enough that he was in Portland teaching a class to other coaches. Steve’s question put it all together for me. I had already run the Marine Corps, so instead I chose to enter the Twin Cities marathon in my home state a month before the Marine Corps.

I could train with them and join Jim’s website forum to verify some of the advice he had given me 14 years earlier. Well, Steve ended up convincing me to run the Marine Corps marathon also, and then the Seattle marathon to qualify for the Marathon Maniacs by doing 3 marathons in 90 days.

On Jim’s forum I learned about Effort Based Training which uses heart rate targets instead of pace for training and racing. I got a heart rate monitor and started taking data prior to the Seattle marathon. This clicked with the engineer in me.

I had learned Twin Cities was the national masters’ championships with prize money for the first 3 places in over 40 age groups. I got 4th in the 50-54 age group. This clicked with the competitor in me. After some e-mails giving Jim my statistics and December’s training log, he believed he could set up a plan for me to run 2:55 or under at Twin Cities in 2006. I had asked for a goal of 2:55 thinking it was a stretch from the range of 3:06 to 3:32 run in recent marathons, but also knowing I had run 2:55 at one time.

I wondered what I got myself into when the January plan was received and only had two rest days all month. I was a lazy runner, rarely running more than 4 days in a row or more than 5 in a week. He also had speed work every week, which I previously avoided or did half-heartedly. The heart rate targets would make it difficult to cheat. I could no longer blame the children for time constraints either, the last one off to college. Within a few weeks of following the plan I completed the Ft Steilacoom 10 miler over 7 minutes faster than the year before.

Soon it was the last week in March, my logbook was filled nearly every day and I was feeling good. I had lost half of the recommended 15 lb toward ideal weight just from the additional running. The plan for the FSRC 20 miler was to run the first 15 miles at 75% heart rate effort and whatever I could for the last 5. Followed the plan too well forgetting to start slow for a few miles and was just hanging on the last few miles.

The following week my wife, son and I travelled to participate in the Yakima River Canyon marathon pre-race spaghetti feed and talk. We returned to Ellensburg to spend the night close to the start of the marathon. The coach’s advice was to not treat this as a race so soon after the 20 mile race, but to gather data and have fun. The heart rate targets were similar.

I had a secret agenda to win my age group, but Rick Becker usually ran this race and had set the 50-54 age group record the previous year.

We woke to freezing rain and strong westerly winds. My family tried to talk me out of running in these miserable conditions, but I had already paid so might as well run. We drove to within 200 yards of the start and waited in the car to stay dry until the last 5 minutes. At least it had warmed so there was no more ice on the ground. I left my sweatshirt on as I jogged to start area, telling Katie I would toss it to them as I came by.

Miraculously the steady rain let up to a light drizzle by the time the starting gun was fired and was gone soon after. Getting my sweatshirt off ended up being a challenge with my glasses on, so I ended up stopping to do it. Now near the end of the pack, I had to remind myself to remain calm and not go too fast too soon.

In a mile I caught Mary and Tony who were on pace to meet their target of 3 hours. Running with them was a good starting pace for me too and part of the fun. Coming up on 3 miles, I realize it is time to speed up a bit as I was well below my target heart rate and needed to gradually increase. As I pick up the pace my heart rate is slow to increase, so I pick up the pace again and again to what I would normally feel unsustainable.

Reaching the target heart rate of 153, I complete mile 6 in 5:54. Recalling I had run a hard 20 mile race only a week before, I had an internal discussion between crashing and burning soon and trusting the coach to maintain the pace at the target heartrate. Since this was just a test race, I chose to follow the heart rate monitor and see what happens.

At about 11 miles I catch the previous night’s speaker, Dick Beardsley. What a thrill to run with a world class marathoner, even though he had been injured in a farm accident. After a few minutes he suggested I get back to my pace. I look ahead and see another runner, thinking that must be Rick, so I do pick it up. A few miles later I see it is Cliff, who I had run many long runs with in Maple Valley. We chat awhile but soon he suggests I get going and sure enough another runner is in sight. By mile 18 I catch him, and see he is not Rick, so I continue on.

Soon I see some blue flashing lights around a bend ahead of me. I say to myself, sure hope no one is injured. Had never been in a position to see the police car ahead of the leader, so that was the last thing in my mind.

I was to pick up the pace after 20 miles, but only my heart rate increased and eventually reached 165 on the uphill from mile 22 to 23 that often breaks runners in this race. Surviving the uphill, we are rewarded with downhill the remaining 3 miles to the finish. I find my heart rate dropping though, so I pick up the pace until it feels like a sprint completing the 26th mile in 5:37.

No way I would have run a 2:48:41 marathon PR only 3 months into a training program without the heart rate monitor. 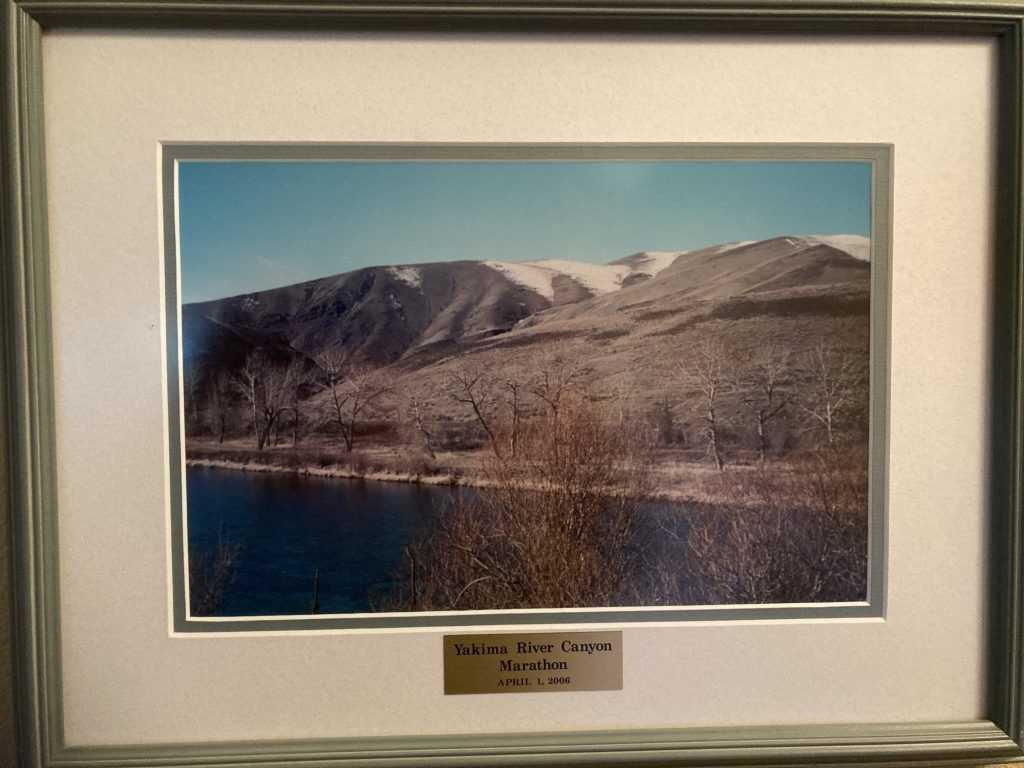