The Pacific Runderland 5k and 10k 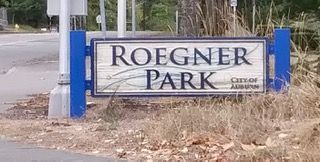 I was especially excited to be registered for the Pacific Runderland this year; it was taking place in the city I call home, taking place in a beautiful location, and with part of the proceeds going to support three Washington National Parks. It was also a new race for the Silver Strider Grand Prix, and would be one race that would move me forward as a finisher.

Many things changed after I initially registered, and like many other events, Runderland pivoted and went virtual. Virtual is better than cancelled…. but, especially after the past six months of social distancing, I really missed being part of a crowd on race day. I wanted to greet other Silver Striders as we passed each other on the turnaround. Missed our group photos and seeing “Flash” Fisher along the route. Brunch with the gang at a local business. But, virtual it was, and I began planning my race day.

However, It was not to be a smooth start, as extensive fires were causing major air quality issues during most of the the virtual race week, and I postponed my plans until conditions improved. I was pretty happy when the rain arrived, the smoke cleared, and I could hit that trail! 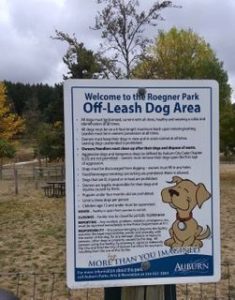 I planned to log my time along the peaceful and well-paved trails at Roegner Park, one of several great parks in Auburn. It was also the originally planned race site, so seemed very appropriate.

I arrived mid-morning, and while there were several cars in the parking lot, it was pretty quiet. With the air finally clear after almost a week of high AQI, I expected more people out and about.

The trail itself is familiar to me, as is the 5k out and back; it has been a site for other racing events in the past. The usual start is near an outbuilding east of a small play area. The trail goes past an off-leash dog park and then up a small incline. 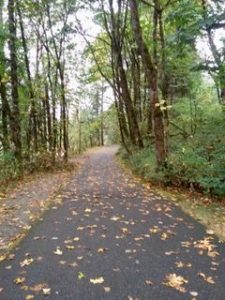 At the top of the incline, a paved path hugs the river through shade trees and mossy picnic tables.The sounds of the river become louder, and there are a few scenic spots along the way to view the water.

Autumn is in the air, with many trees turning color and their leaves falling to the ground. Very peaceful.

There were a few other walkers and runners along the way; all were friendly and most “masked up” with me as we passed each other. A few dogs kept owners company, chasing squirrels and enjoying the fresh air. 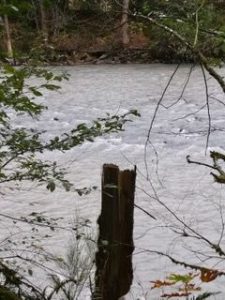 I paused a few times to watch the flow of the river, my surroundings strangely quiet and empty. The turnaround point arrived, and I met no one as I changed direction and headed back. I impulsively decided to take a parallel path back marked as wheelchair accessible; the grade was flat and smooth, and the path was fairly close to the road.

Not as scenic, but it did change up my walk and dropped out right next to the dog park. A small pug barked at me as I strolled past the fence. Made me laugh a bit.

I rounded the corner of the dog park. The parking lot was half full when I finished my race, without clock, water station, or music. 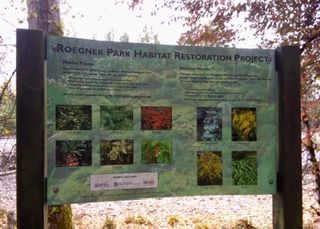 I feel a bit nostalgic for live races of the past, but am grateful for the time spent on this beautiful trail. I also am happy to finish my 7th Grand Prix race.

Until we can all be together again, a virtual high five to all my fellow Striders! I will be thinking of you when I hit the pavement later this week for the virtual SUMMER’S END 5k.

At this point, we will have at least 5 virtual races remaining on our 2020 Grand Prix Series schedule. Still plenty of time to become a finisher.