When I was asked to write a race report for the virtual Orca event, I tried to think of how my report could even begin to compare with some of our other talented Silver Strider writers. I thought of saying “No”, of course, but who can ever say no to Karen Lichtenstein? Kudos to her for heading up the reports and taking on that feature for our website!

I needed to find something challenging to write about for this article.   Right around the same time, Dave Sherman asked me to help “transport” him back to his car after he would complete his Boston Marathon virtually. He needed a ride to his virtual start line. Magically, my article and race inspiration would begin as he crossed an imaginary finish line with only Charlea, myself, and a dog named Finley as the crowd support. 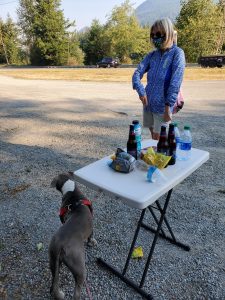 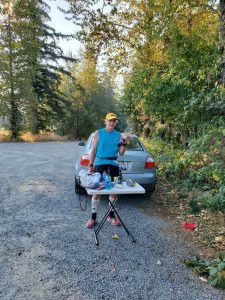 To his surprise, he did have a small personal table which was stocked with the normal post-race treats and fuel, along with a 3-pack of Samuel Adams Boston Lager. The Sherman’s love their Boston trips and always attended the Samuel Adams brewery post marathon. It was the best I could do to bring a bit of Boston to the “Light at the End of the Tunnel” marathon finish.

At that time, I was inspired and determined that I too could do a virtual marathon myself.   It would possibly be a decent race to write about for my Orca race report.

Those of you that know me a little bit are aware that I have my own unique marathon training.  A few years back I decided to do my first marathon, so of course bought the Big Book of Marathon Training.  I think I was a week into my training when I put the book down.  My training is really only the tapering part as I never really get in any type of mileage.

Recently due to a lack of races, my longest run, usually every weekend, has been 9 miles in the great trails of Pt. Defiance.

My plan was to run the Orting Trail, starting at the East Puyallup trail head.   The weather was going to be nice.  Susie Hall was going to run with me for a 10K stretch for her Orca event.

That morning as I was brushing my teeth to get ready…I stopped and said to myself  (I think actually out loud)….”I’m no Dave Sherman!  What do I think I am doing?”

It is my usual pre-race whine and pity party which I often throw myself before I do any races.

Then I met Susie at the trail head and her enthusiasm and laughter suddenly made me happy to begin this virtual marathon. It was great to have her company.

Somehow prior to the start, I locked my keys in the car with all my hydration and timing device for the race. I called my daughter to bring the spare set and it was decided, we could do the 10K out and back while we waited for the extra set to be delivered. It was a fun 10K and just great to catch up with a fellow Silver Strider and friend.  We ended up walking it as it seemed to be the thing to do that morning.

After that was finished, I was able to get into the car for my fluids and a quick sanity re-check.  I only needed to run ten miles along the Orting Trail and then back!  At this point, I didn’t feel much like running but wanted to just do a nice long walk by myself. It has always been a comfortable trail with lots of bikers and other runners.

I loved going by the pumpkin patches and the Christmas tree farms. I was able to enjoy the walk and fall morning which, of course, turned into the afternoon.

I ran into one lady that had a bib on and was doing the Orca Half. Great to see people still with a passion for runs, keeping up with their races. I found a lucky penny and a painted rock.

I took along the little stuffed animal orca that I won at the Whale of a Run a few years back. I was able to be a wanna-be Flash Fisher and took photos along the course.

My race took close to 8 hours but somehow now I need to do another virtual marathon for my own self reward. I need another challenge and marathon to run!

The next race for me will be the Chris Jarvis Memorial Marathon out of North Platte, Nebraska. I wanted to find a marathon with a good cause, good price, decent shirt, and memorable story. (in no certain order!).

Please take the time to read about this runner. Chris Jarvis started his running career later in life, age 31 and never stopped until his unexpected passing at age 51.  He ran the distance of the circumference of the earth  (24,859.82 miles) twice over his 20 year career.

It really is interesting to read about this runner from Nebraska.  He would have been an ideal Silver Strider in his own community. He was a great fitness inspiration and running icon during his short running career.

I liked a quote in the story from Dr. George Sheenan who was a running philosopher. “Don’t be concerned if running or exercise will add years to your life.  Be concerned with adding life to your years”.

Chris Jarvis taught his own children about the meaning of “true north” and following their own path.  I did a google search on this and read a few variations of the meaning of true north as I hadn’t personally heard this term before. I’ll close with my favorite meaning.  It holds so true now in our crazy world.

I miss our Silver Strider family and hope everyone is well.   I consider so many of you my True North!

True North is the internal compass that guides you successfully through life.  It represents who you are as a human being at your deepest level.  It is your orienting point – your fixed point in a spinning world that helps you stay on track as a leader.

Jerry’s notes:  Tiare Bailey seized the lead in the Grand Prix Series mileage competition with her marathon in a time of 5:13:55. That dropped Kent Sizer, Nick Bailey and Steve Husko into a tie for 2nd.
Mark Hendrickson is planning to have a Virtual Christmas Rush in December. That means there are four races left on the schedule after the Maverick Race.