Skip to content
HomeArticlesThe Foothills Dash 5k, 10k and Half

Last year’s Foothills Dash on March 7,2020 was our last race before our world completely changed as we know it. I remember it as a perfect race day. I took a first place and Steve took a second. Bruce Fisher took our pictures before and during the races.

We went out for brunch with our Silver Strider friends, celebrated birthdays, had a special dessert, and everything was right with the world. Since then, Steve and I have been running all our virtual races, except for one, with Nick and Tiare Bailey, mostly in Port Townsend, but, once in a while, in Sequim.

Sometimes Isabelle Noiret joins us too, but usually runs farther and begins ahead of us.

Port Townsend has always been one of our favorite spots, anyway, and it’s only about an hour from our home in Bremerton. We used to visit there all the time with our friends and family or just the two of us.

It’s in a beautiful location with delightful water views on one side and the Olympic mountains on the other. It’s filled with gorgeous, sculptured buildings built in the late nineteenth century, as well as wonderful shops and places to eat.

According to a fascinating book, full of pictures and descriptions, called, “Victorian Architecture” by Allen Denison and Wallace Huntington, “Port Townsend remains the finest example of a Victorian seacoast town on the West Coast.”

For our virtual Foothills Dash 5K, we met Nick and Tiare at the Port Townsend Marina and dry dock in the parking lot for the Larry Scott trail.

The first half mile is flat and runs along the water with nice views of Indian Island and Marrowstone Island. As one approaches the paper mill the trail gradually starts uphill and into the woods, reaching the steeper part in about another half mile. Then continues gradually uphill another half mile to a road, which is our turn around. The way back is a fun, fast run downhill back to the flat, and ends before the parking lot for a nice walk left to catch our breath.

Tiare always runs with Steve and times him on her Garmin watch. I have my own Garmin (which Nick actually ordered for me), but Nick and I start our run together. Nick runs with their dog Annie, who has a mind of her own. She takes Nick all over the place, from one side of the trail to the other, sometimes charging ahead full speed, with Nick holding on for dear life. He usually finishes his 5K more quickly, because of Annie’s explorations.

Afterward, we went for breakfast at the Bayview Restaurant, which is on the water and close to the ferry dock.

They try to vary where they take pictures to show off the many sights in Port Townsend. Nick and Tiare have been our guiding light throughout this pandemic, and we can hardly wait to do the next race with them.

On Saturday morning (2021), several Silver Striders gathered in Orting. Although it was a virtual race, they wanted to run the actual course and enjoy the camaraderie that had been missing during the past year.

Bob Davies was in Denver on Saturday greeting his new Grandson. He decided he didn’t like the weather so he flew home to run the Foothills Dash on Sunday. 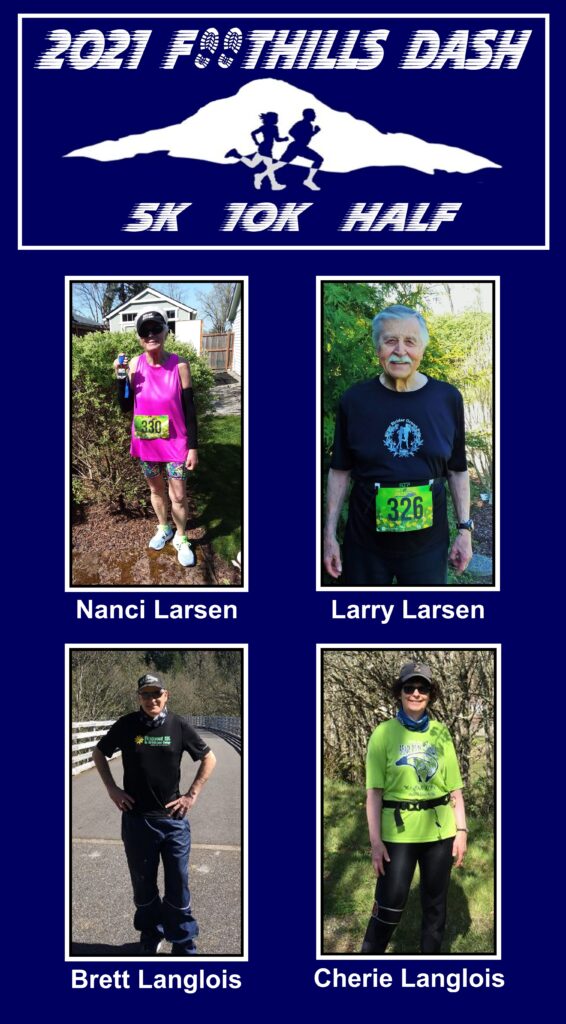