xxxxxxxxxxx The 4th of July – A Triple Treat

The Crown Jewel Series kicked off with three races on the 4th of July.  Players could choose which race they wanted to do for credit in the series.  The three races were:  The Carnation Run For The Pies, The Independence Day 5k in Tacoma, and the Four On The Fourth in Steilacoom.

Regarding Carnation Run for the Pies 5K: Weather was perfect i.e. no rain, limited mud, and comfortable temperature.

There was plenty of parking although some might have wished it was closer.  I thought it worked well as a warm up. Originally there appeared to be a shortage of Potta-Potties.  It seemed that the thought was to save most for the evening fireworks.  When it became apparent that three PP would not handle the crowd, the correct decision was made to unlock a larger number.

The course was a bit twisty and had at least a couple of steep down hills that might have hampered the faster runners. Not a tortoise like me.

Prizes and awards?  I’m sure they did.  Unfortunately I left too soon. Dave Anderson or David Longmuir would probably know.

I believe it was water at the aid stations.  The refreshments at the finish were perfect.  What’s not to like about Pie and Beer?  All finishers received  a commemorative pint glass upon entering the facility restaurant/Pub. Each then chose a small sample of pie and proceeded to the bar where there was a large selection of beers on tap. Hand them the aforementioned glass and receive it back filled with your choice.  I had a delightful porter.  Admittedly David Longmuir and I headed to the refreshments before the line got long.  And it did get long.

This was a good run.  I look forward to next year.  I’m considering going back earlier just for the porter. 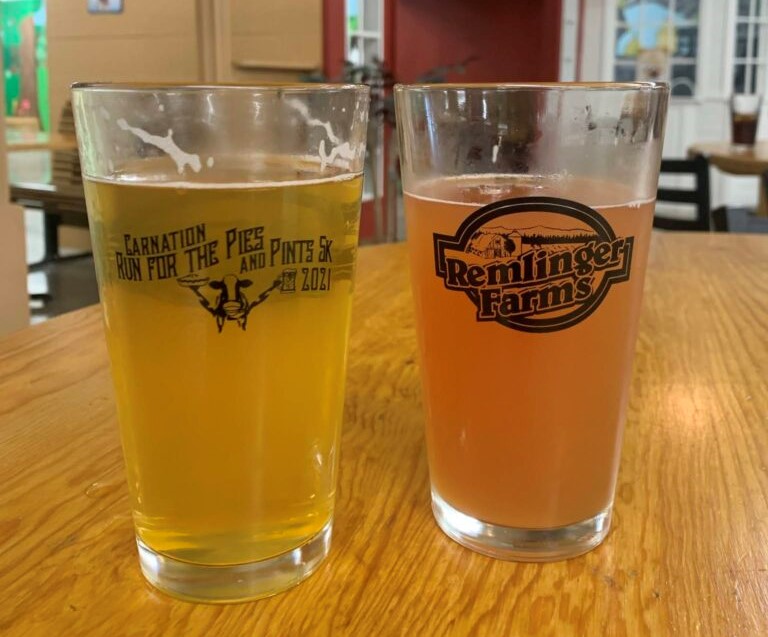 Louise Mihay Reports –
The weather was ideal for running:  70ish, overcast, no rain.
There was adequate street parking at the start line.  After the race I got right on a shuttle for the trip back to my car.
I liked the course because it was mainly flat and downhill.
There were ribbons for the finishers.
There were no aid stations but plenty of refreshments and snacks at the finish.
I got so excited when I saw my time of 29:02 that I forgot to pick up my ribbon and t-shirt.

Greg “Sticks” Waters Reports –
Mitch Parker and I had a great time yesterday at one of the finest 5K course’s I’ve ever ran! I discovered a couple years ago that I had an advantage on downhill slopes over many runners.

Mitch and I battled the first half mile and then I took off with a 4:36 pace during the 65 meter Vassault drop off for a sizable lead. My 1st mile was a 5:51 followed with a 5:57 mile two—-unfortunately it flattens out on mile three a bit and I definitely lost my momentum with a tough 6:37 mile three –and Mitch was soon on my heels within three seconds of catching me.

It was a cloudy morning and we couldn’t see Mount Rainier like we did in October for the Wicked fast Halloween run! I don’t think there’s a more beautiful finish line than right in front of the gorgeous Silver Cloud Inn on the plaza!

Hope to see you soon–I was a pro drummer for 25 years so all my HTC relay members call me Sticks! 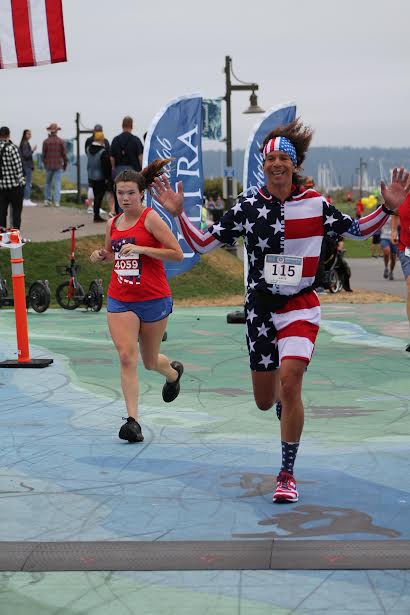 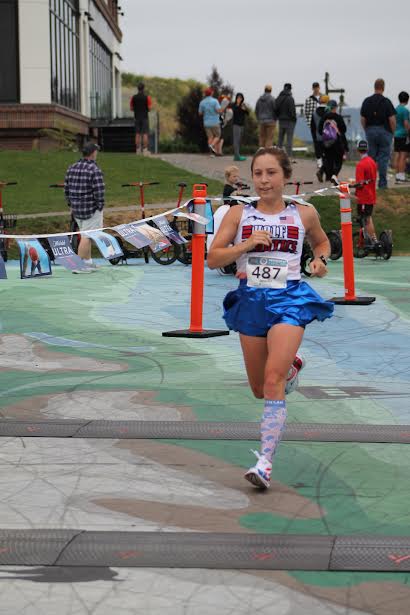 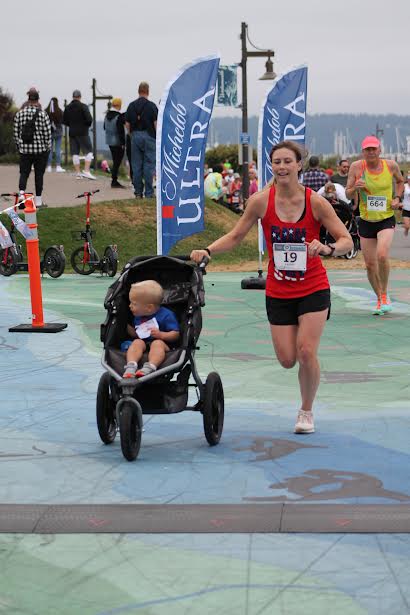 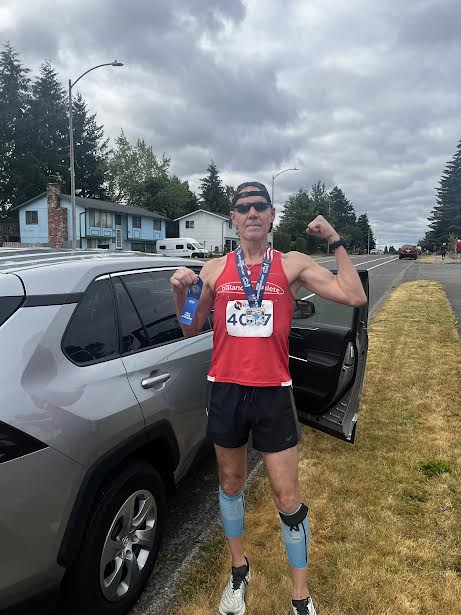 XXXXXX The Four On The Fourth 5k

Gretchen Ramsdell reports –
It was straight forward to get there, only a few turns.
The weather was perfect, pleasant, no rain, sometimes a very slight breeze from the water.
I should not have parked on the main drag, as one had to wait for the final runner to finish. It would have been better to turn left at the barrier and find some neighborhood parking. The only bathrooms were in the City Hall, not really enough.
The course was fine, nice along the water. The only water stop was at the turn around, but that was adequate.
I don’t know what the awards were like, since I was last, in 5th place.
There were no refreshments except cups of water at the end.
The Burs Restaurant is always good, and there was a good turnout of Silver Striders.

Jerry’s notes: All three of the Crown Jewel 4th of July races had a very good turnout. Pie and beer barely trumped a fast time. The results:
Run For The Pies had 559 finishers.
The Independence Day 5k had 544 finishers.
Four On The Fourth had 360 finishers.

As far as Silver Striders participation at the 3 races was concerned, the athletes were pretty evenly divided among the three race choices.

The 4 mile race saw Paul Smith, the current Silver Strider 10k Champ, lead the Silver Striders with a time of 23:42 while finishing 6th overall at age 58.

xxxx Four On The 4th Results in Photos – By Bruce Fisher 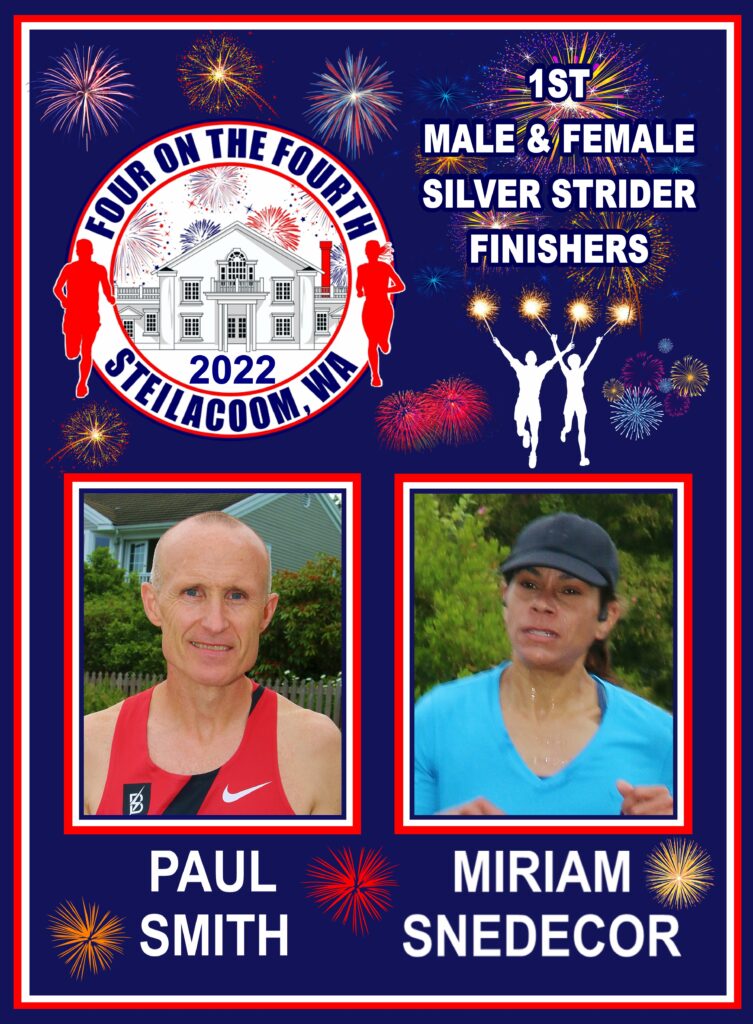 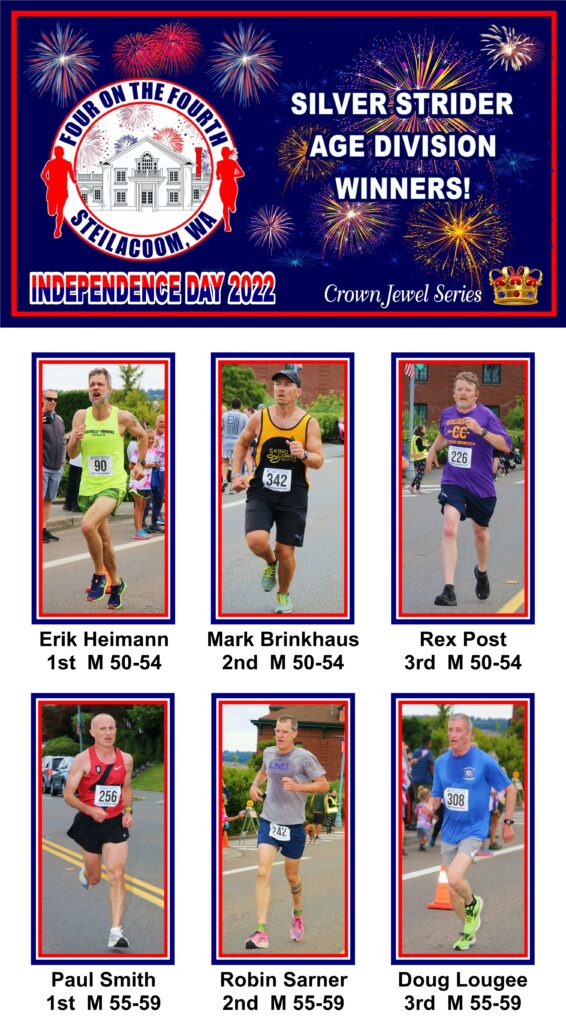 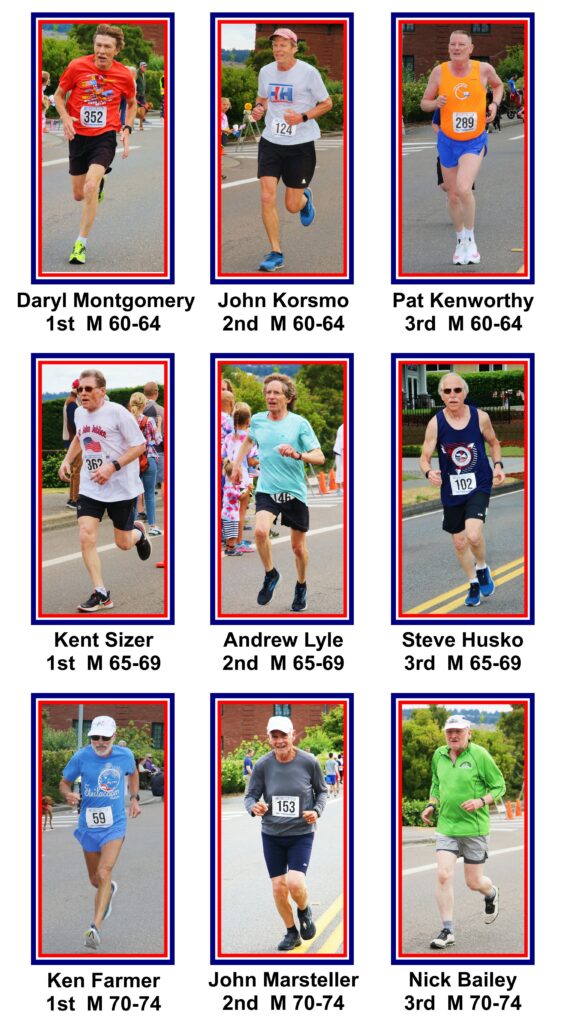 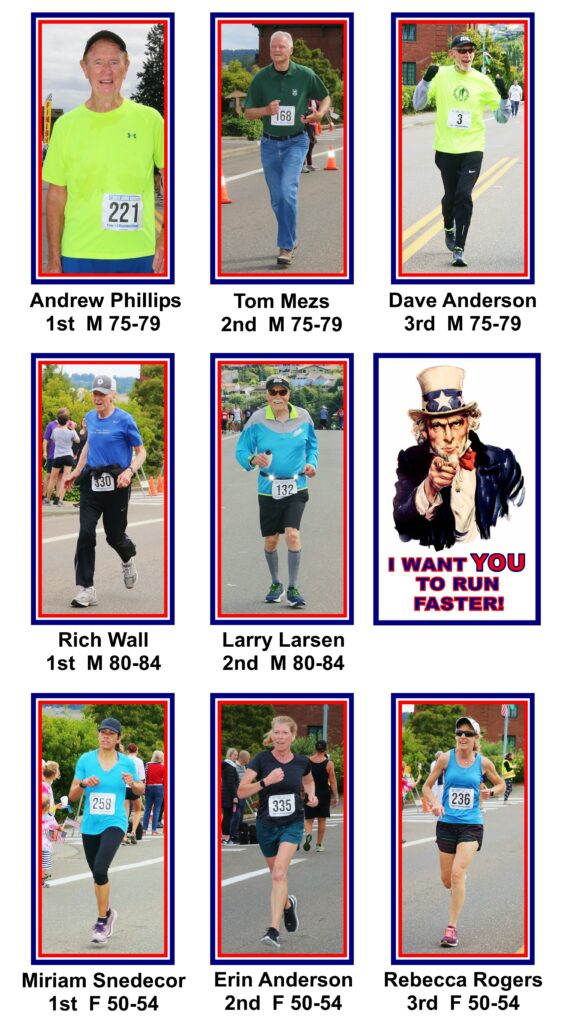 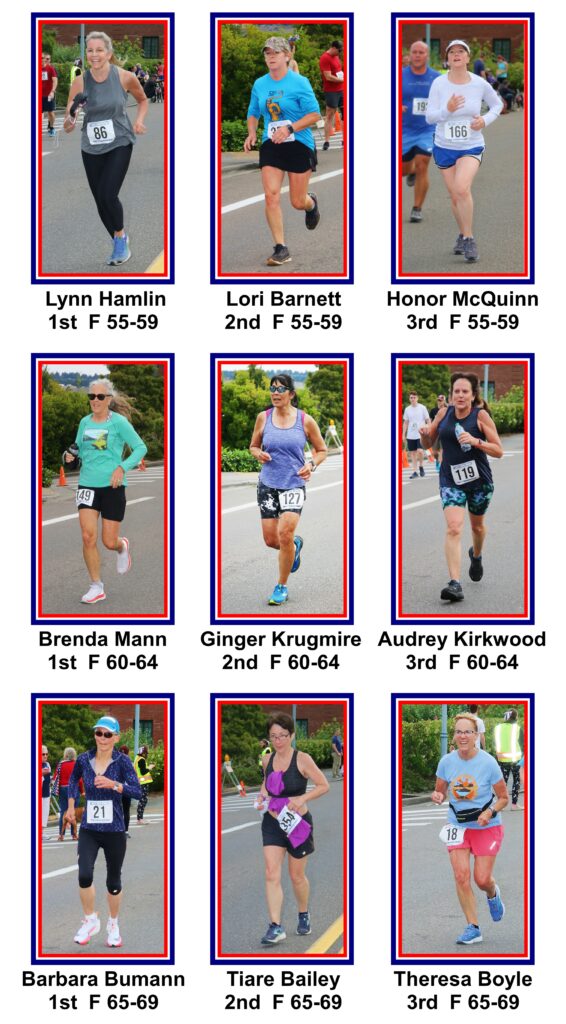 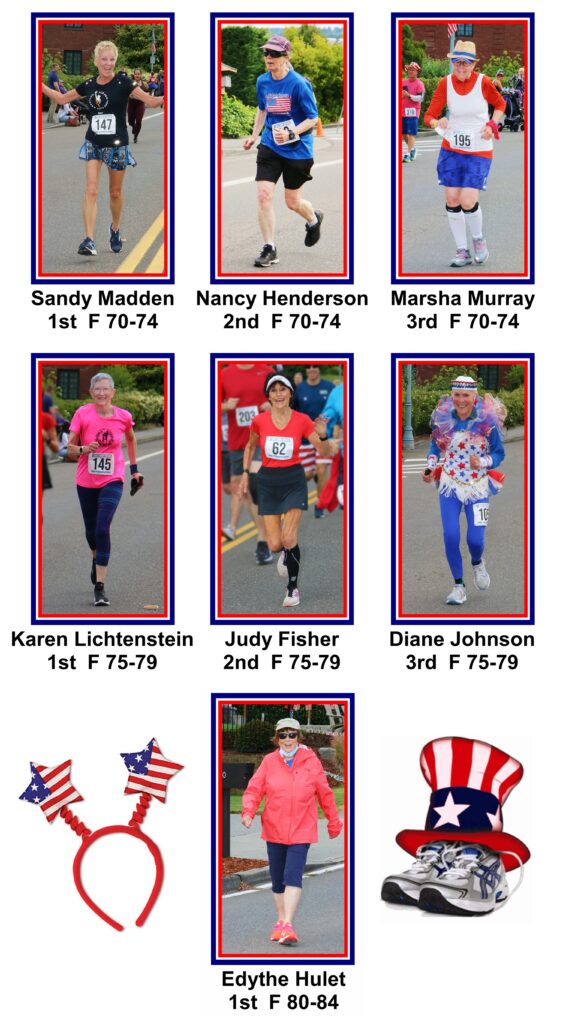 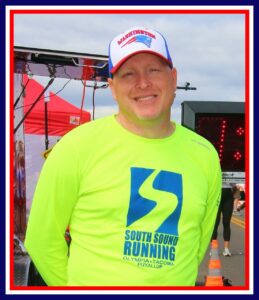 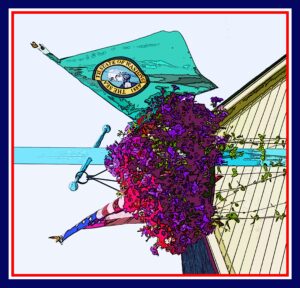 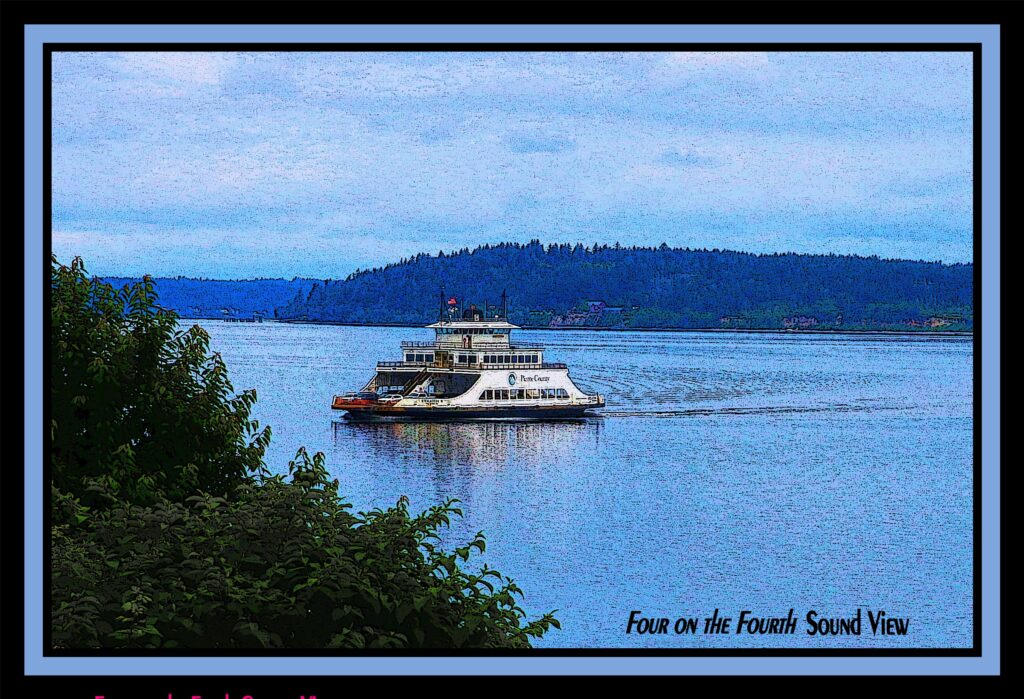