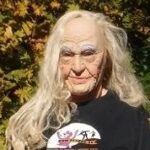 As I approached my 8th race, the Maverick Run back in early October, I thought that was my last virtual race this year. Karen Lichtenstein however contacted me through email, asking me to write an article on the Run Scared Race. It was already the middle of October and I was wrapping up a 3-month work trip in San Diego, but Karen encouraged me to figure this one out and make it happen.

I was scheduled to fly home October 30th, cutting it close for me to run this race but I planned on doing it anyway over Halloween weekend.

Donning my new Silver Strider shirt, I was able to perform that Sunday and surpassed my own expectations.

My initial plan was to get my eight virtual races done before I came home, which has been difficult for me. It felt strange not being out there with my fellow runners and it was difficult to maintain my race pace.

Even though it’s been a struggle for me during this strange COVID-altered year, I put up with it with the knowledge that we all must be safe, keep our distance and wear masks when required.

Reflecting back during last year’s Run Scared race, I recognized I didn’t do well. I was having difficulties with plantar fasciitis, a tearing of the muscles below my left foot. It wasn’t a good race for me, but somehow, I still was able to get 3rd in my age with a time of 26:02.

It probably didn’t help that the day before I also ran the Halloween Kitsap County 5K run and I was hurting pretty bad doing that one with a time of 25:38. The thought of running two races in a row was difficult, considering I could barely run on my left foot, but that’s how dedicated I am to running. If I commit to something, I don’t miss it.

With that said, doing the 2020 Run Scared virtual Race was like deja vu for me with another injury occurring on my big toe on my same foot! This brought back painful memories of 2019, so I was worried that this will be a repeat of last year’s poor time. As it was, I ran okay but didn’t push too hard and finished with a much-improved time of 23:47.

Injuries are something I’ve been forced to get accustomed to. Going back to 2017, I was forced to grapple with an unknown injury. After a series of doctor visits and x-rays, a grapefruit sized benign tumor was found in my left femur bone. I didn’t know what to expect when I found out the news, but I knew it wasn’t good.

I have had a significant addiction to running since I began in high school and this particular injury had the potential to end my running career for good. This was a scary thought for me. I didn’t know how it all was going to turn out with a serious operation and lengthy recovery on the docket. But I tackled each obstacle like I did each and every run beforehand, with tenacity.

First was a long three days in post-operation at UW medical center, then three months of physical therapy just to walk. It was at this point, I let myself believe that running was a possibility again. I asked my doctor if I could try and he didn’t see why I couldn’t if I monitored my pain and discomfort level.

I started out slow, focusing on marginal gains. But eventually, with time, I started to add more miles and picked up some speed. I was determined to try and make a comeback.

It’s been almost four years since my surgery and I’m still back to where I was before this happened. My gait is off, and I keep having issues with injuries on my left leg because of it, including the two that have slowed me down during these last couple Be Afraid runs.

I think we all have that inner self that keeps us moving no matter how fast we go, and I am determined to gain back as much back as possible.

I’m not much of a writer, but I have enjoyed being part of the Silver Strider group. They take you in wholeheartedly like family and accept you as you are.  I’ve never seen that from other groups. They’re always helpful.  They cheer and encourage you with plenty of accolades. They always think of others which is something I am grateful for during such a dark year for so many. It’s a group where if you ever needed help, someone would always be willing to lend a hand.

Jerry’s notes: Only 3 races left in the Series. Congratulations to the latest Series finishers. They are Cherie Langlois, Audrey Kirkwood and Susan Hall. Susan and Audrey have been finishers for 10 straight years.

Preview in new tab(opens in a new tab)