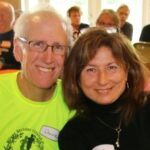 A pedestrian and bicycle road runs along most of the Marmara coast on the Anatolian side of İstanbul. I had the pleasure of running two of the Silver Strider Distance Derby races there.

Covid-19 kept my wife, Mine, and me a world apart for a year. She had gone back to Turkey to deal with affairs after her mother’s passing in December 2019, and though I had accompanied her there, I had to catch one of the last flights out to get back to Bellevue last March.
This spring we both got vaccinated and I flew back just in time for her birthday on March 15. We had a wonderful reunion, enjoying lavish Turkish breakfasts, shopping at the farmers market, and going on nice walks. I worked remotely, staying up late at night for meetings with colleagues back in Seattle.


The Fort Steilacoom Resolution Series race was the weekend after I arrived. Naturally I ran the 20-mile option.
We live in the Kartal district of İstanbul, close to the Atalar station of the Marmaray commuter rail line, and just a few blocks from the coast. I jogged to the coast and then started my race heading northwest.
The coastal road is a marvel of city planning. On my left was a rocky seawall. On windy days some waves crash over the seawall onto the walkway, but most of the time the rocks are dry and people and cats scramble among them.

The Princes’ Islands not far offshore add to the wonderful view.

On my right a long park separated the pedestrian road from a coastal highway. This park is dotted at regular intervals with playgrounds, exercise equipment, tea gardens, and restrooms, all clean and well-maintained. It is little wonder that the whole city seems to be there on nice days.

After about five kilometers this was briefly interrupted by a detour onto a sidewalk by the highway before entering Orhangazı City Park, which is an immense recreational complex, full of tennis, volleyball, and basketball courts, a velodrome, soccer fields, and an excellent running track. (Another soccer field with a track seems to be under construction.) It also has miles of bike and pedestrian paths.

My runs usually end by this point, but for this race I continued on, soon taking a detour onto the sidewalk around the ferry terminal at Bostancı, beyond which I had never run before. West of Bostancı, I discovered that there are a few actual beaches on the Marmara shore and people were out playing on the strand. The coastal pedestrian road seems to come to an end in Fenerbahçe, but that was almost exactly ten miles from where I had started and thus my turn-around point.

I had started out a bit faster than planned and then backed off just a bit, but was feeling pretty good. The Maurten sports drink that I was trying for the first time seemed to be the sugar water I needed. I’ve now run essentially this distance four times and this was another PR, at 2:46:41.
At the end of my stay in İstanbul, I had another race to run, the Foothills Dash. Due to pandemic curfews, I had to run this on Friday; we were locked down on Saturday. I chose to run the unofficial virtual half marathon.
For this race, I started out going southeast to the ferry terminal in Kartal. I could have continued in this direction all the way to Pendik—there and back is almost exactly 21 km—but there are slightly more detours that way and I thought the wind might pick up and be in my face coming back, so instead I headed back in the same direction as my first race. I went all of the way through Orhangazı City Park and then back home.

Once again I had started out a bit fast and did my best not to slow down too much. I was very happy to finish in 1:43:14, my second best half marathon.

Istanbul is truly one of the great cities of the world, with a rich history, a bustling modern life, and great scenery. I am grateful to have once again had a chance to run and explore there and, most of all, to spend time with the love of my life.