By Jerry Dietrich
with photos by Bruce Fisher

It was difficult to prepare a salute to Chloe. She was a modest person who didn’t brag or talk about her athletic achievements.

Her athletic accomplishments were many over the years. I can attest to the last 16 years that I knew her.

During that time she was active in the Silver Strider Grand Prix Series. She won her age group for 5 consecutive years from 2013 to 2017. Jerry announces Chloe the winner.

Chloe was also a member of TeamSilver. Her Gold and Silver medals at the Rhody Run were instrumental in the team winning the Jefferson Cup twice. She confided to me that the Rhody Run was her favorite race. The challenging 12k course suited her talents. She is in the team photo below, standing 2nd from the right.

I can’t attest to her total achievements for this race because results are only available back to 2008. Results available show 5 Gold medals, 4 Silver, and 2 Bronze.

Chloe began running when she and her close friend, Jean Cornwell, were recruited by their employer, the telephone company, to join their corporate running team. As part of this team, they had the opportunity to compete in races throughout the west coast. In the summer of 1990, Chloe and Jean’s team was invited to compete in the prestigious Goodwill Games in Seattle. This world class competition drew elite athletes from around the world. On the day of their race, the temperature soared into the 90’s. Chloe recalled it being a grueling experience, but one that she treasured in her running career.

Chloe loved road racing and competed in hundreds of road races, long after she retired.

She was active in the Senior Games track and field events. Over the years, she won many medals in this competition.

In addition to running, Chloe was an avid skier and belonged to the Bremerton Ski Cruisers. Chloe enjoyed ski trips and traveled extensively to enjoy this activity. In her late 80’s, Chloe traveled to France on a skiing trip and held her own with the younger skiers.

A natural athlete, Chloe enjoyed competing in sports activities throughout her life and was an inspiration to all who knew her.

Sandra Madden – Our beloved Chloe Parr passed away last month.  She was born on February 22, 1929. Chloe was a familiar face at the Grand Prix races and afterward enjoying breakfast with a beer. She was a classy, beautiful woman with humor and a storyteller’s soul.

Nora Collings – I first met Chloe in 1986.  My first Good Times Ski Bus trip.  I looked around noticing that most of the bus had “older”people on it.  My thoughts were, well this should be interesting and yes it was. These so imagined “older persons” were the most wonderful skiers and loved to have a good time, as per the name of the bus.

Chloe stood out in the filled bus, sitting at the very back. There was Chloe, her husband, her friend Jean, and her cousin Gayle. They had a large cooler, with the top off being used as a table or bar of sorts.  They were mixing the most elaborate Bloody Marys  with celery a dash of this and a blend of that.

Dennis Zaborac – Chloe was proud of being the oldest Strider. I had seen her at many races, but the first time I really got to know her was at a Silver Strider breakfast.  We sat together and bonded by being the only two runners to have a beer with that breakfast. She told me the story of her harsh childhood and how her family, like the “Okies,” had crossed America from the east coast to the west during the Depression. She laughed when I said, “WOW! I thought you were much older and crossed America in a covered wagon.” For many years after, whenever we met, she would kiddingly refer to herself as that “gal in the covered wagon.”

Holly Hall – I enjoyed our close association with stories from childhood, family matters, and perseverance during her lifetime. To you, Chloe: I will reminisce your presence as I run your regular Saturday Kitsap Lake run.

Betty Dietrich – I first met Chloe at the Kitsap County Stampede 5k in 2005.  I was crushed, along with Chloe, and her running buddy, Jean Cornwell, into a pack of eager runners waiting on a patio for the start of the race.

Jerry and I were newcomers.  We had recently moved to Washington and didn’t know many runners.  Chloe introduced herself and Jean.  Swapping funny running stories with a big smile, Chloe made me feel welcome.  Until the gun went off… and then it was serious business.  After the race, we exchanged phone numbers.

Chloe soon called to invite Jerry and I to join her Saturday morning running group.  There were about 8 of us who did a 4 mile run around Kitsap Lake.  It wasn’t supposed to be competitive but someone forgot to tell most of the runners.  After the run, we enjoyed a leisurely breakfast at the Big Apple Diner.  It was lots of fun!

Chloe invited me to her aerobic dancing class at the Bremerton Senior Center.  She could dance!  She and Jean arranged for us to accompany them onto the restricted naval base so we could compete in a 5k race.  Chloe encouraged us to compete in the West Sound Senior Games…a first for me!  We carpooled to many races together and Chloe always made them fun and entertaining.  So many acts of kindness!

Chloe was a great athlete and an even greater friend.  I will miss her! 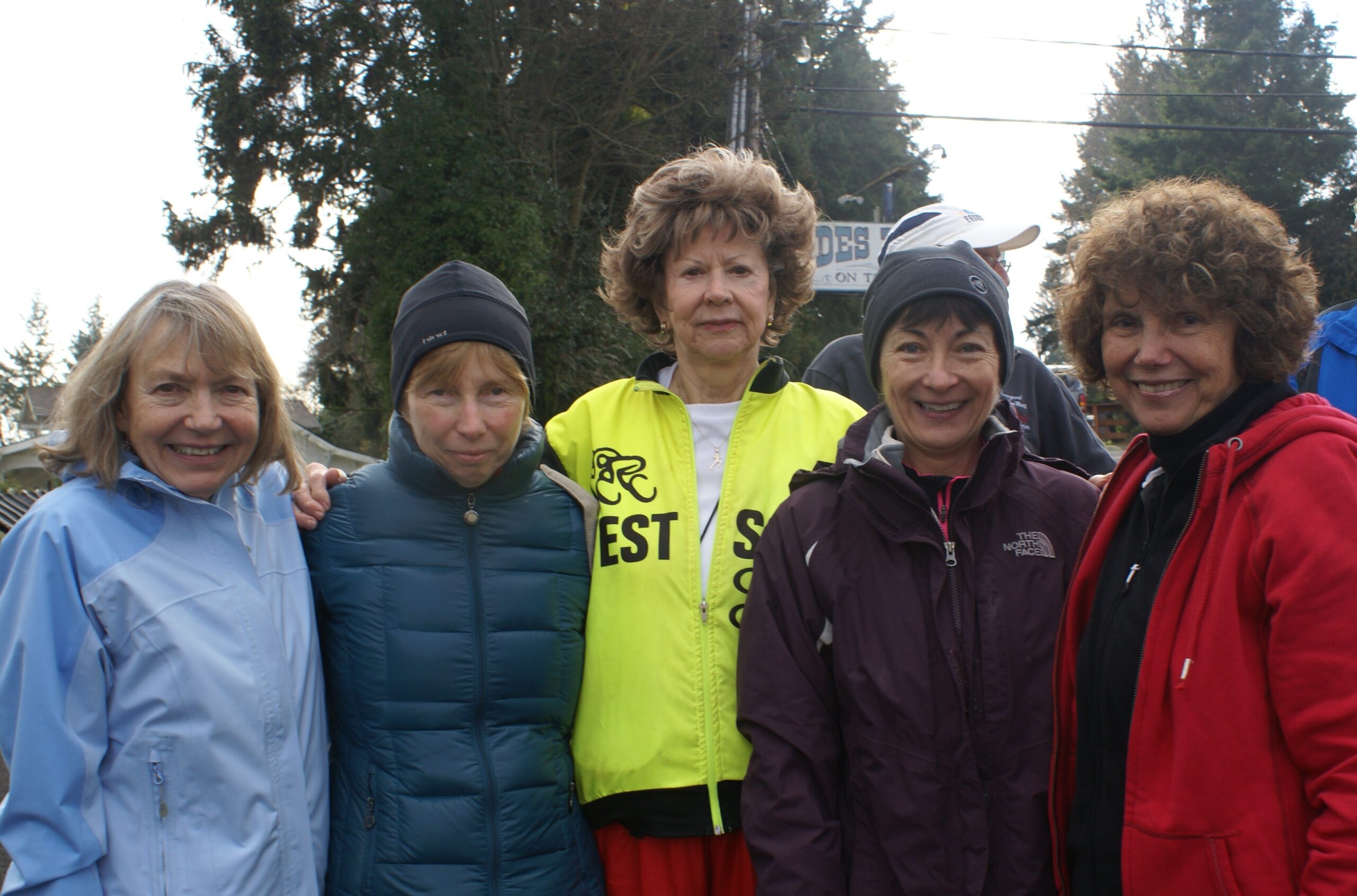