Years ago, in a small orphanage in Vietnam, an eight-year-old girl asked me a question that all runners ask themselves. “When will you quit running?” It was an innocent question asked of an old runner.

“I will run until I can no longer beat younger runners,” I told her. “There is no fun in an old man beating old men. To run well, you must chase younger runners.”

The young runner I chose to chase was Dave Sherman.

I met him in a 5K race over a decade ago. I was a pretty good runner then, even with brief walk breaks. But every time I took those seconds to catch my breath, Dave would silently glide effortlessly by me. I would then race past him numerous times only to watch him beat me to the finish line. Right then, I knew Dave was the runner I wanted to be. His running style was that of a smooth well-tuned Ferrari, while mine was that of a sputtering old jalopy.

Dave and I ran countless races together throughout the years. Not really together, though. He was always ahead of me and usually out of sight. His training pace was faster than my racing pace. The rare times I managed to edge him out in a race were perhaps sympathetic gifts to me. Still, I’d like to think that there may have been a few times I pushed him to run a bit faster.

Dave was much more than an elite runner; he was an extraordinary man one could learn from. His talents extended well beyond the running world. So, when we lost him on a training run a few weeks ago along the Foothill Trail in Orting, the memories of the times that our paths had crossed through the years overwhelmed me. We all have memories of races we have run but rarely do we ever run with those memories.

Dave passed away while training for his 10th Boston Marathon on the course of the Mud Mountain Half Marathon. It was a race he intended to run in preparation for his marathons but was never able to do. So, I decided to run that race with the memory of him alongside me.

The weather on race day mirrored that of Dave’s last run. It was a bright cloudless autumn morning where the sun warmed your back while the crisp mountain air cooled your face. Mt Rainier loomed over our shoulders. Everyone was excited and in high spirits to be at the start line. The smiles were everywhere. I envisioned Dave standing beside me, beaming his shy, angelic smile.

Usually, in races, I would start near the front and watch Dave pull away. But this time, I stayed in the back to run side by side with his memory.

The half marathon began in the center of South Prairie and finished 5 miles past the downtown area of Orting. The first 8 miles were the miles that Dave ran in his 16-mile training run.

The first mile of the race led runners across a treeless sun-drenched plateau that bordered the highway. The second mile was a short dogleg.

Those out and back in previous races allowed me to watch Dave and see what a beautiful running style he had. He was swift and intent with little expression on his face. His whole body moved in sync with each step he took. No hair was out of place, and there wasn’t a bead of sweat on his face. He made running look so easy. It was impressive to see so much serenity in such a strenuous endeavor.

I never saw Dave smile while he raced. He was such an intense athlete. And rarely did you hear him laugh out loud. But when he did, it was priceless to see and hear.

The last time I heard him laugh was at the Isabella Stewart Gardner Museum in Boston this year. Four of us Striders, including his wife Charlea, went to view the historical pictures and sculptures on display there. We apparently were looking a little too closely. One by one, we were chastised by security guards for getting too near to the paintings or touching areas we shouldn’t have.

There were guards in each room, and they must have been alerted to watch us as we moved about the building. Dave had not touched anything but was guilty because of his association with us. When Charlea was tagged a second time, and the guards gave Dave the evil eye, he lost it. He turned away from us and tiptoed slowly to the farthest wall, his shoulders shaking with laughter. I also tried to disassociate myself from the berating Charlea was getting. I followed Dave to the room’s outer edge and admonished him for his lack of respect for such a venerable institution.

After the dogleg on the course, the trail turned downhill through a lush forest where speckles of sunlight filtered through the trees. As I continued along the route, I began to think about Dave’s connections to Boston.

Dave loved Boston, its race, people, city, and history. He shunned other great races across the country to return year after year to Boston. And he took great joy in showing his Boston to friends and strangers.

His most significant accomplishment as a tour guide was getting me into a church this April for the “Blessing of the Athletes.” I don’t remember if he pulled me in or Charlea pushed me in. It had been decades since I last went into a church.

As I neared mile 4 in the race, I slowed my pace, knowing that a memorial to Dave was nestled in the forest nearby. It marked where Dave’s heart, tired from all the love he gave this world, wore out and left his many friends brokenhearted. My imaginary run alongside Dave ended at that memorial. 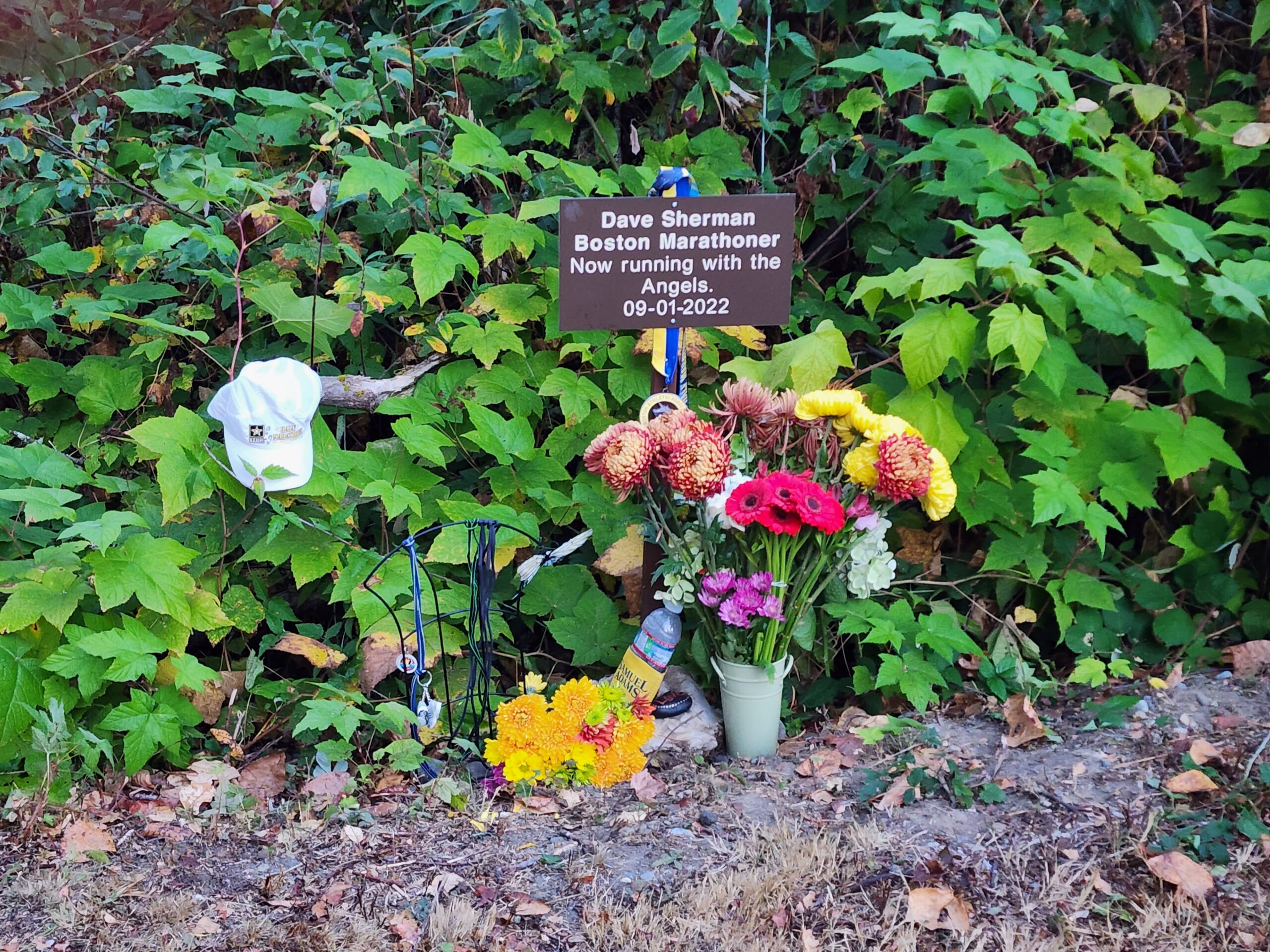 At the water stand there, I left him as a volunteer. That was something he did many times at races across the state. In addition to handing out water, Dave provided support, smiles, and encouragement to struggling runners. I smiled, thinking of him handing out slices of the wonderful blackberry pies he had baked. 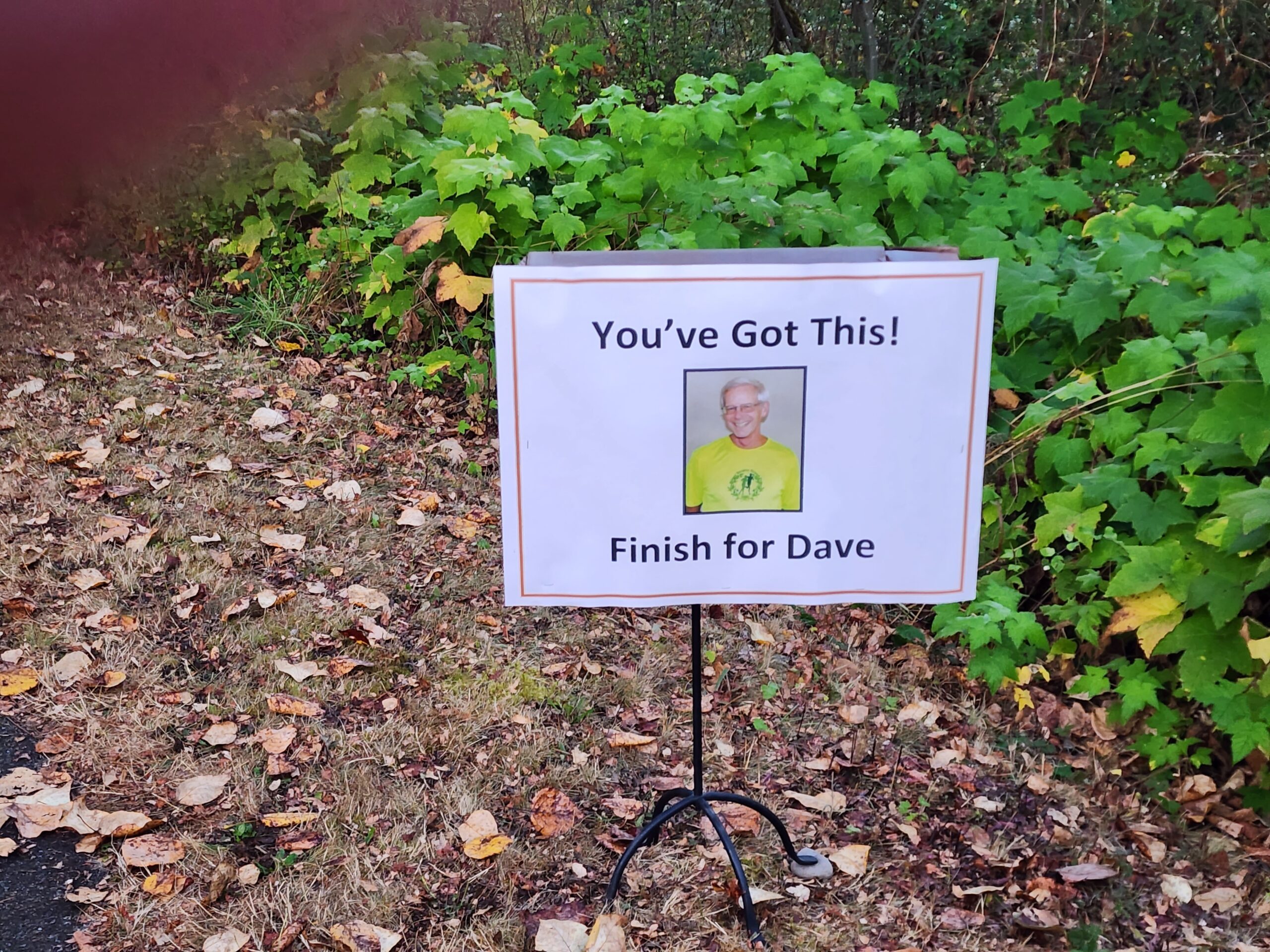 As I moved further down the trail finishing the miles that Dave couldn’t, the landscape took on a more somber look. The course mingled memories with loneliness and sadness. The path was empty of runners except for me. In open stretches of sunlight, I chased a dark shadow of myself. In the shade of trees, leaves fell like teardrops on the lonely pavement.

I thought of how focused Dave would be on this stretch of the road as he neared the end of his training run. His life was everywhere I looked and ran. He had done so much with the talents he had. As I passed the flowing Carbon River, I envisioned him joyfully navigating one of the kayaks he had made by hand.

Looking upstream, out in the distance, I could see the mountains that Dave and I had hiked together at times. There, just like in racing, he always led the way.

When I rounded a corner and saw an open field, I thought of how Dave would have enjoyed flying one of his model planes there. Further down the trail, I viewed a railroad bridge and thought of Dave, and the train set cushioned away in his basement.

More open fields nearing the town of Orting had me thinking of how Dave’s love of gardening could have farmed that piece of earth and planted fruit trees. Or how he could have let his dog Pepper run free and do the chasing for a change. Looking at a dry riverbed, I saw little stones that Dave was known to hand paint and give to friends and runners.

Running on the course that both Dave and I ran and trained on brought comfort to me, but when I crossed the blue line on the pavement where Dave would have finished his run and returned to his truck, the reality set in that Dave was no longer with us. But that doesn’t mean he is forever lost. I know where to find him.

Hike into the Cascades and climb to the top of the highest hill you can. Stand tall in the night’s darkness, and look to the heavenly stars above for a fiery ball of light streaking across the sky. That is Dave sprinting from star to star.

And someday, when I become just a memory and have given up the chase, you might see two shooting stars, side by side, racing through the universe. 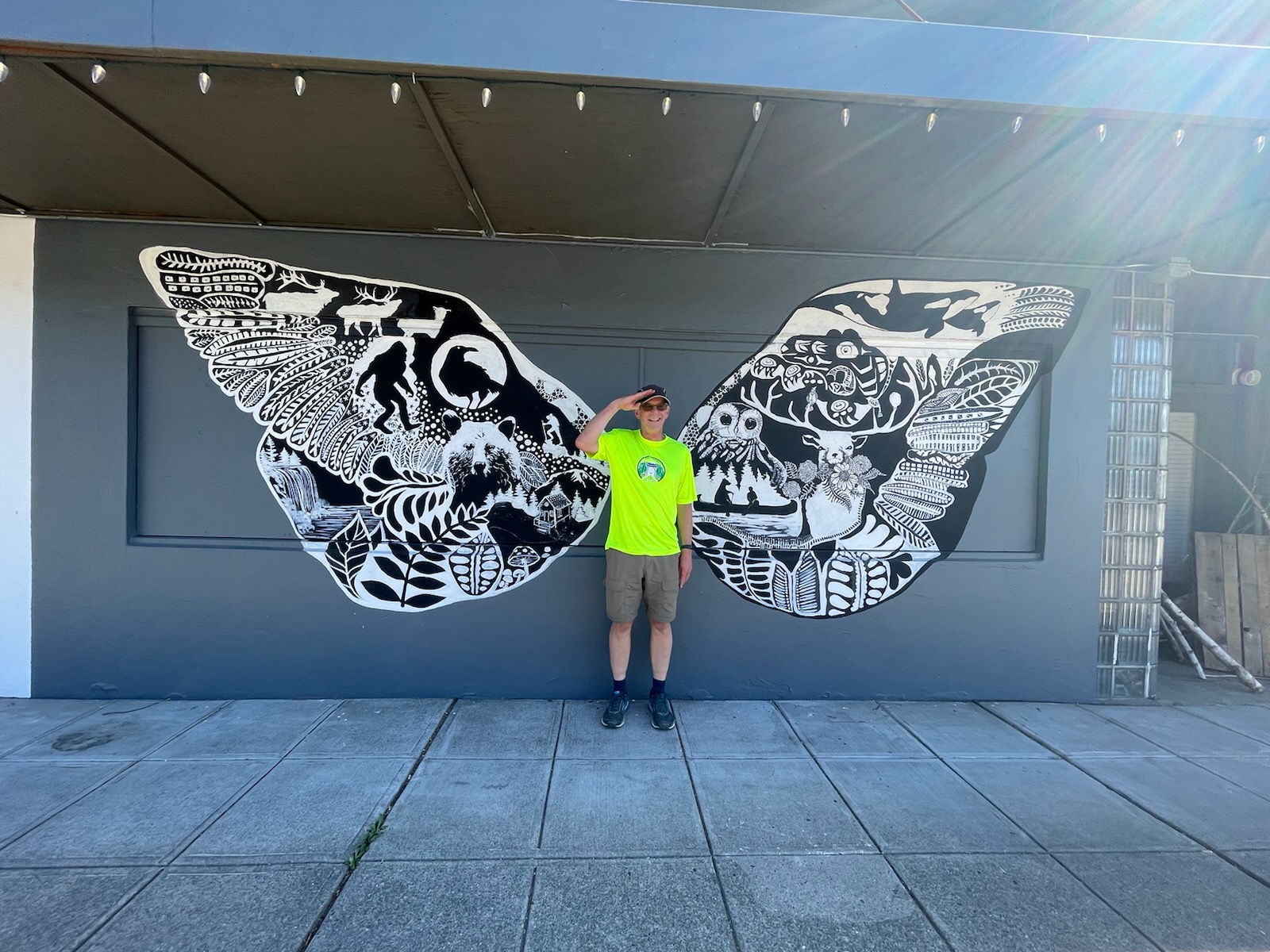