by Karen Lichtenstein
with photos by Bruce Fisher

The railroads that contributed to the trail are the Seattle & Walla Walla, the Columbia & Puget Sound, and the Milwaukee railroad. In 1986 the entire rail line was removed and became the Cedar River Trail. East of Cedar Falls the trail is known as the John Wayne or Iron Horse Trail.

The weather at the start of the race was cloudy and cool, perfect running conditions. Bruce Fisher had us gather near the race start for the Silver Strider picture, then we were ready for the race.

Karen carefully described the race course and explained the procedure for getting the finisher token scanned along with the personal barcode. We started the race on a long, gradual downhill stretch through the woods. 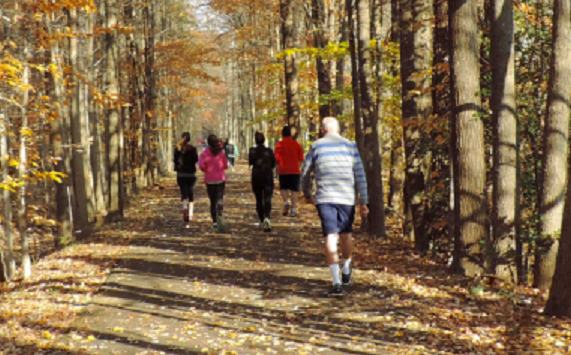 I followed Tiare Bailey because she was setting a good steady pace as we raced down the trail. The trail had lots of shade, and the paved surface was nice and even.

After I passed the turnaround, I closed the distance and managed to pass Tiare on the uphill. She usually beats me in 5k races, but she has not been able to run for a month so I had a chance in this race.

When we passed Edythe Hulet, she called out numbers to let us know our overall place in the race. With 51 participants in the race, I was definitely in the middle of the pack. Both Keith Lerew and Wendy Sweeney maintained their leads and each one finished in first place.

After the race, I checked the ages of participants, and 57% of the runners were Silver Striders.

Patty Husko arranged for a Silver Strider breakfast at the Whistle Stop Restaurant which was not far from the race course, and the food was delicious. We had a great time telling stories about other races and catching up with each other. It is wonderful to have in-person races and see our friends again. Photo courtesy of Patty Husko

Jerry’s notes:
Louise Mihay’s 31:01 performance reduced her #1 all time Washington 5k record for Women 80-84 by 45 seconds.
Judy Fisher 78, posted a National Class time of 28:28 for a age graded rating of 83.26%
This race was the 2nd race in the Tortoise and Hare Handicapped Series. Handicapped results are listed below following Bruce Fisher’s “Results in Photos”.
Note: Jerry’s notes corrections made on 8/31/21

XXXXXXXXXXResults in Photos by Bruce Fisher

XXXXXXXXThe Handicapped Results for the Tortoise and Hare Series

The handicaps were more accurate for this race. The baseline for men is 20 minutes. For women it is 25 minutes.
With perfect up to date handicapping and everyone doing their best, the result would see all men finishing in 20 minutes and all women in 25.

The women’s time spread for Kent was 7:41 when disregarding Nanci and Diane who accompanied others.
For the ParkRun the time spread was greatly improved at 3:02.