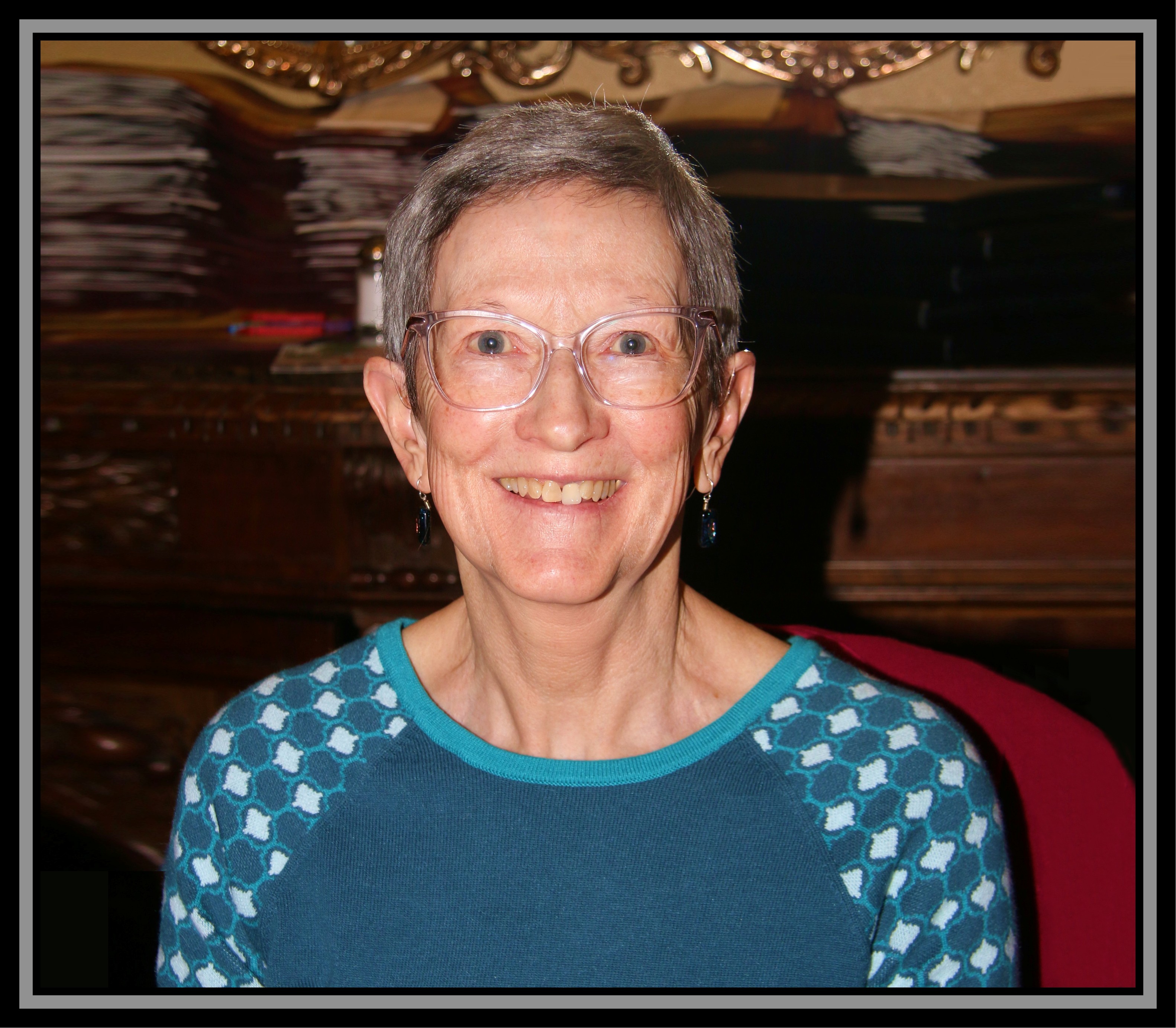 The weather at the start of the race was sunny and cold, perfect running conditions. Bruce Fisher had us gather near the race start for the Silver Strider picture, then we were ready for the race.

The race director, Drea Lyon, carefully described the race course and explained the procedure for getting the finisher token scanned along with the personal barcode. She told us to notify them if we were finishing an important step such as 25 or 50 Parkruns. 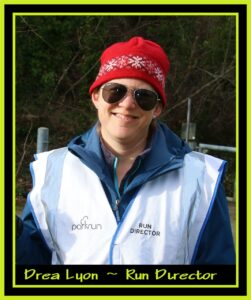 Jerry Bronson has now completed 25 Parkruns. Some of us are just learning about Parkruns. I was pleased to learn that every Parkrun has a tail walker to follow all the participants and finish after the last walker. One of the slogans for Parkruns is “walk, jog, run, or volunteer.” The Parkruns encourage every form of participation.

We started the race on a long, gradual downhill stretch through the woods. I passed Judy Fisher early in the race so she would know that I was not somewhere behind her. I was waiting for Judy to pass me during the race as she has in the past.

Since this was an out and back course, I was watching and waiting to see the lead runners stream by us. The first Silver Strider male was Igor Velichko with Denis Villeneuve not far behind.

The very first woman in the race was Kimmer Muenz with a commanding lead over the rest of us. After I passed the turnaround, I passed a younger woman who had slowed down as we started up the hill. I was impressed to see Marsha Murray running a faster pace and looking strong. I saw Edythe Hulet walking with Molly Childs and Terrie Ford. They were having a very animated conversation.

I wish that I had been on the finish line to see Igor and Denis because they were so close. Igor Velichko was the first place Silver Strider male with a time of 20:04, and Denis Villeneuve was only 4 seconds behind him.

Kimmer Muenz maintained her lead and was the first woman to finish the race. 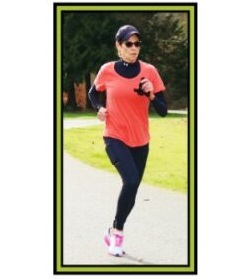 Congratulations to Kimmer for running a great race.

There were three Silver Striders getting ParkRun Personal Bests. Congratulations to Denis Villeneuve, Kimmer Muenz, and John Marsteller. The age graded course record was set by Judy Fisher on September 25, 2021 with a score of 91.11% for a time of 28:07. After the race, I checked the ages of participants, and 57% of the runners were Silver Striders.

Patty Husko arranged for a Silver Strider breakfast at the Whistle Stop Ale House, and the food was delicious. There are so many good choices on the menu that it is hard to make a selection. Patty and Steve have done a great job of testing and selecting restaurants for the Silver Striders.

Jerry’s notes: Silver Strider Kimmer Muenz was the first woman overall. Kimmer is also ranked #1 (W60-64) in the current TOP IO. The 5k times posted on this course continue to dominate the TOP IO rankings.
The turnout was good considering the freezing weather. It was too cold for me. I decided to stay in a warm bed and run virtually at 11:30. The finishing times and virtual times are listed following the photo results by Bruce.

Results in photos by Bruce Fisher 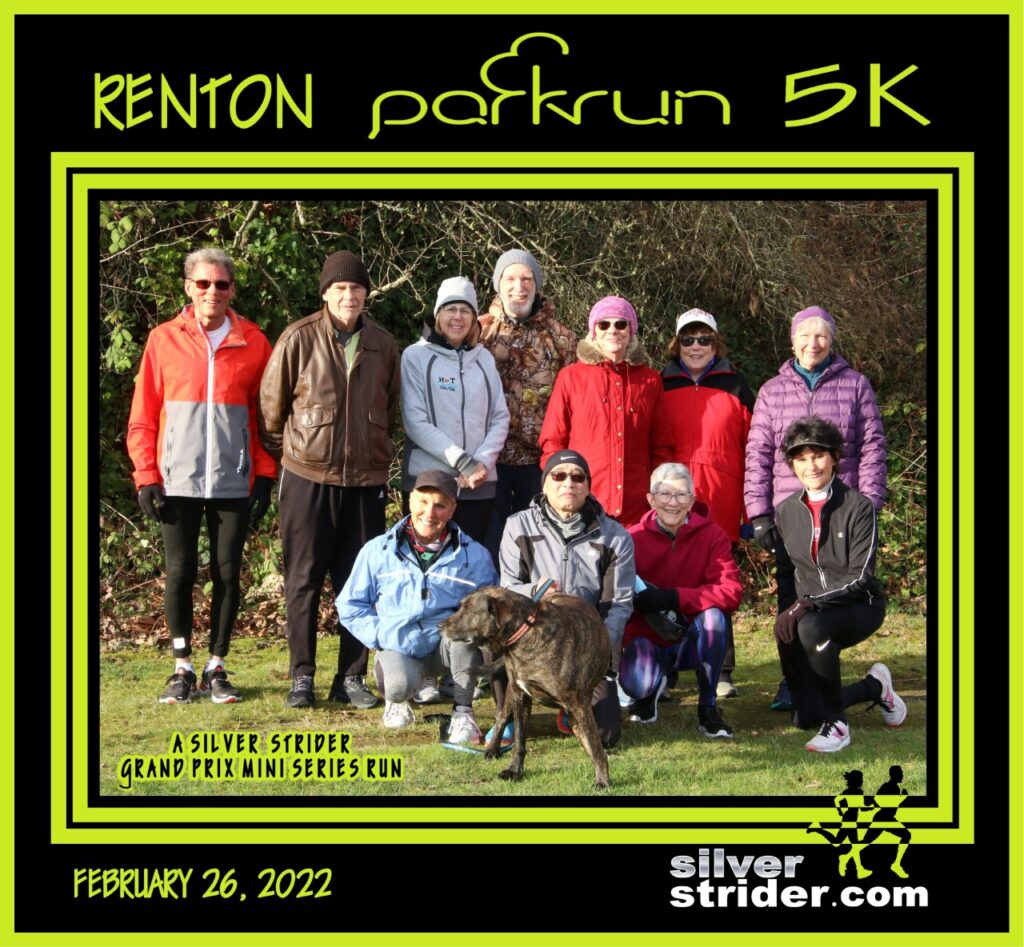 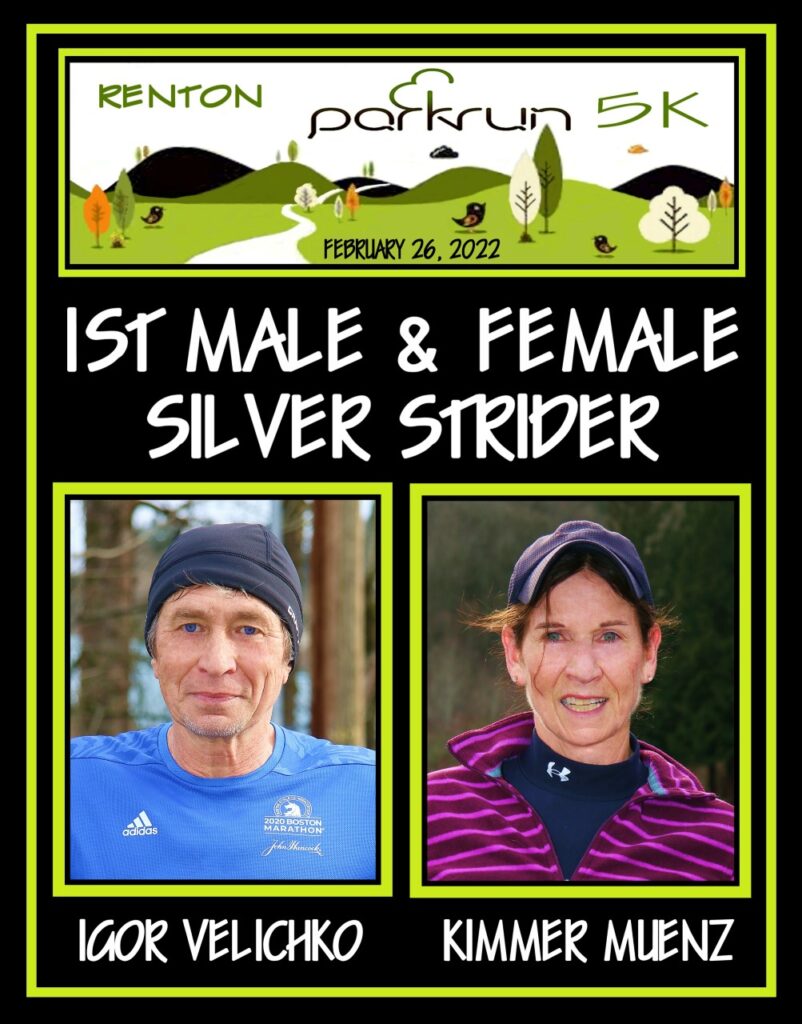 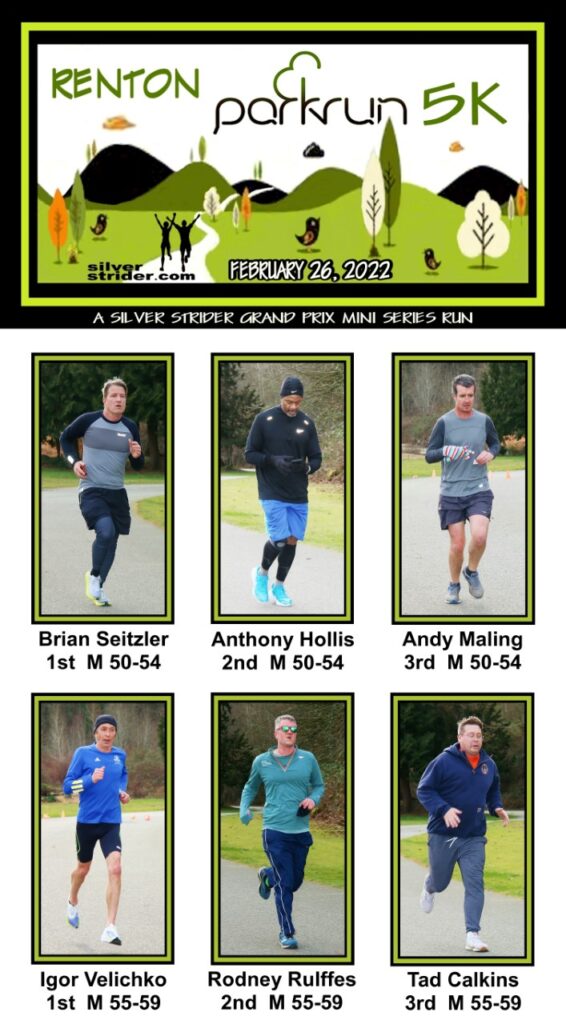 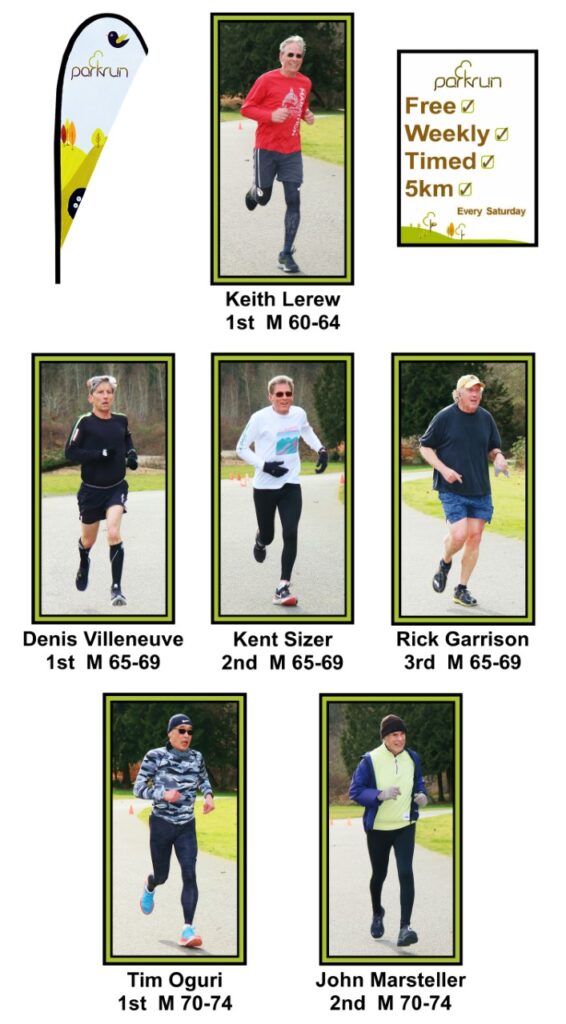 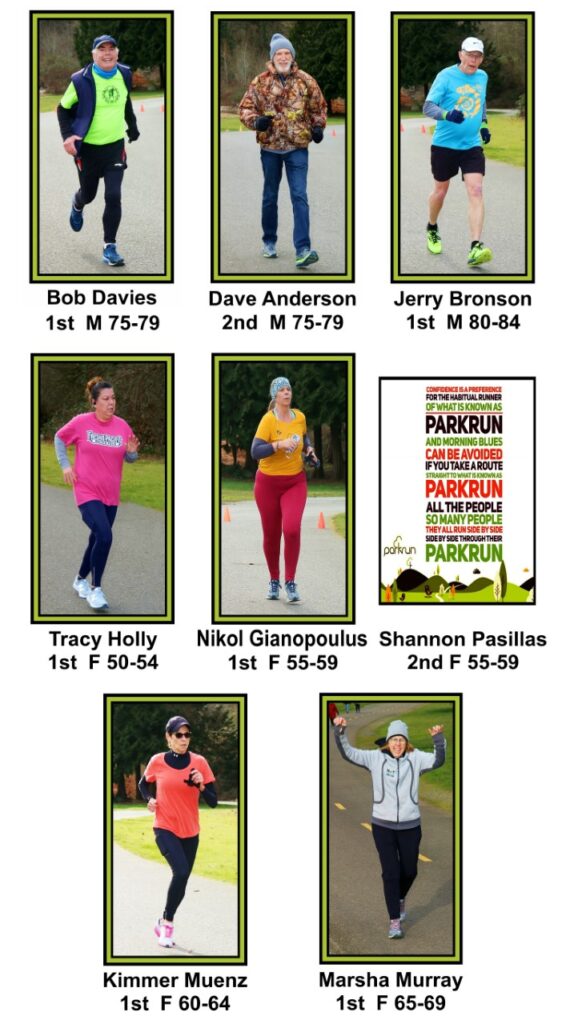 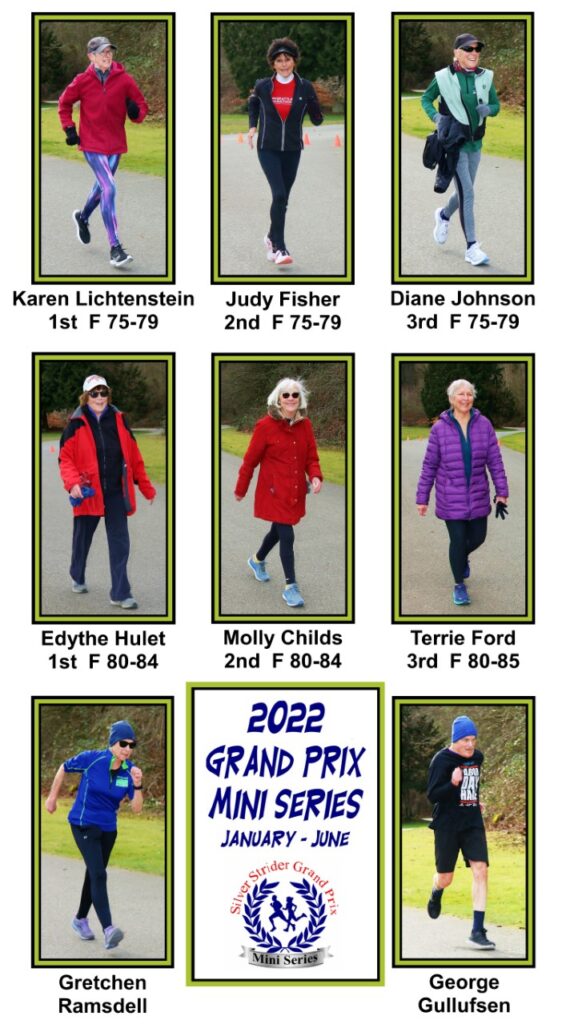 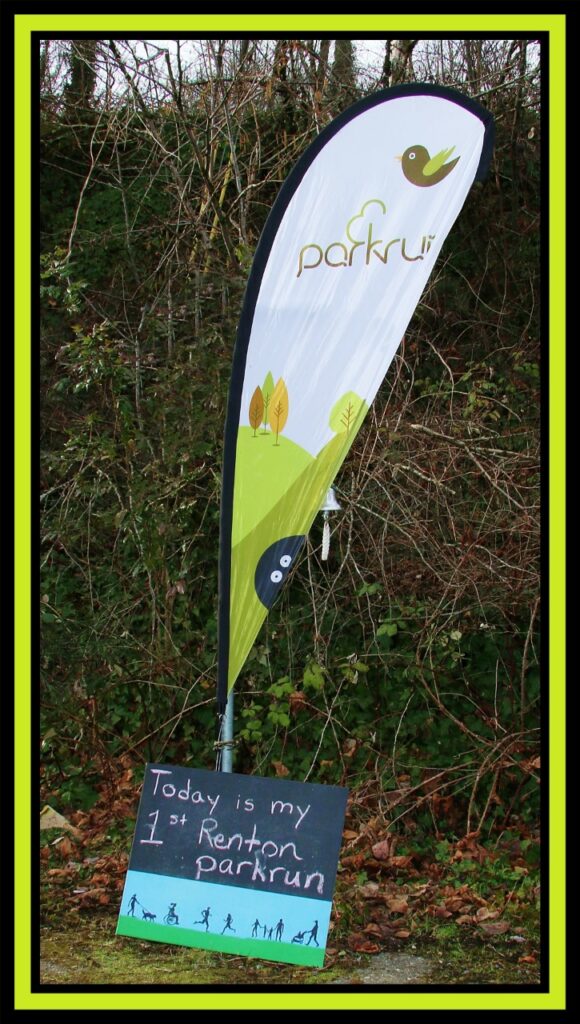