Skip to content
HomeArticlesIn The Heart Of An Awl

……In The Heart Of An Awl

In October of last year, I happened to see an announcement for the 2020 Coeur d’ Alene Marathon, to be held in May. Especially since we were signing up seven months ahead of the race, it wasn’t too hard to persuade Charlea that the both of us should run the full marathon. I could coast on my training for Boston the previous month, and Charlea could do some good training runs in the spring to get ready. This race would involve no pressure, no need to run particularly hard, and not too many hills. It would likely be sunny but not hot, although it would be almost certainly be nice enough to drink beer outside after the race. Given all that, we went ahead and signed up.

Springtime didn’t turn out as planned. The race got postponed to August, which we were quite sure was optimistic. As spring gave way to summer, it was becoming apparent that the race director was trying really hard to put on a race, yet it was also apparent that Idaho was having virus troubles and was having difficulty coming up with a coherent response. We gave the race a 50-50 chance of taking place and of Coeur ‘d Alene being safe enough for it to make sense to go there.

I’m not a real fan of summer marathon training, being as I have other things to do that time of year. And training for a race that may or may not happen is particularly hard. I put in enough miles to prepare for a marathon, but at a minimal level of effort. Charlea most certainly wasn’t going to do marathon-worthy training and decided to drop down to the half if there was a race.

About two weeks before race day, the race director got approval to hold the race, incorporating a lot of changes to minimize interaction amongst racers as well as volunteers and spectators. He also offered a virtual option. It was time for us to decide if we really wanted to travel that far, stay in a hotel, and do this race. The race director’s plan looked well thought out and designed to allow for a safe race.

The small hotel we stay in has doors and windows that open to the outdoors, so that seemed safe enough as long as we did our own cleaning of high touch surfaces. We could bring much of our own food and could eat outdoors at a couple of places in town. As long as we avoided crowds and indoor spaces it seemed a tolerable risk, so we decided to go.

The first item on the race director’s plan was a dispersed packet pickup, held over three or four days and located outdoors. When we picked up our packet, there was only one other runner there. So far so good. Of course, there was also no expo. Prior to picking up our packets, every racer had to choose and sign up for a 5 minute window within which to start. The available starting times were during certain periods on three days. Each window allowed up to eight runners or about one starter every 40 seconds. We were instructed to show up at the start no sooner than at our starting window’s time, then space ourselves out and take off running. There was no such thing as gun time, only chip time. My start window was at 5:30am and Charlea’s was at 6:45am.

To minimize the number of volunteers on course, the plan called for no course marshals at all. The course was marked with tape arrows on the pavement, most of which was on a paved trail. Runners had an optional app that they could put on their phone, that would call out turns and would let you know if you went off course. Aid stations had two volunteers and a table full of 16 ounce water bottles along with some gels and so forth. It was all self serve.

Some water stops in the full marathon were 4 miles apart. We were instructed to follow other runners no closer than 10 feet, and if overtaking, to make a quick pass. Upon finishing, we were instructed to get our post race snack and water, and then get outta there. Spectating was discouraged at the finish.

I wasn’t a fan of having water stations 4 miles apart, so I decided to carry a 10 ounce hand bottle. At each water station I would slow to a walk, grab a 16 ounce water bottle, take the cap off my hand bottle and refill it, then replace the hand bottle cap and take a swig out of the 16 ounce bottle before tossing it and its cap. I had visions of throwing away the wrong cap, but fortunately that never happened. The water bottle ritual probably cost about 2 minutes of time over the whole race.

I found I rarely was running anywhere near anyone else. I passed a few people and a few people passed me, but the 10 foot rule never was a concern. The paved trail was about 12 feet wide most of the way, so passing runners going the opposite way on the out-and-back sections was no problem. When I did come up on someone to pass, I would speed up until well past them, then resume normal pace. I never did end up running in a group. I carried a mask but never needed to use it, even at the start.

After the race, it was still morning. We went back to our hotel and cleaned up, then went out looking for lunch. We found a place with a deck overlooking the finish area and had a nice lunch and the requisite beers. 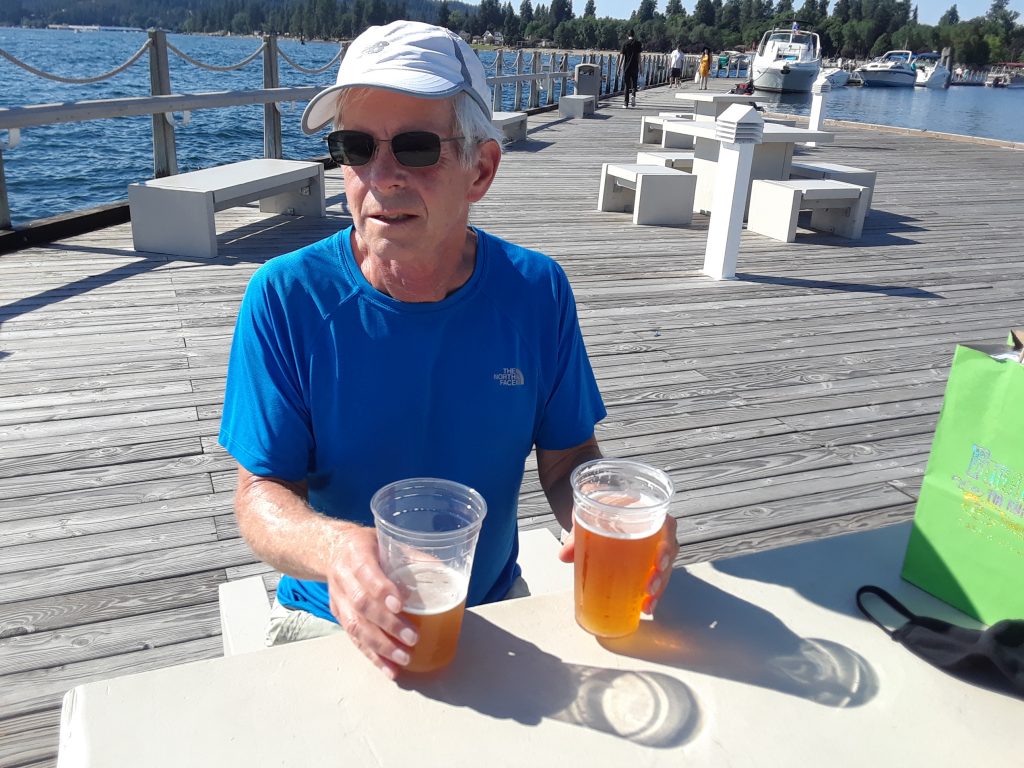 The two days we were in town, we noticed the pandemic culture was much different from what we are used to. Only about 20% of the people on the street were wearing masks, and we suspected a lot of the mask wearers were from out of state.

We were walking down the sidewalk, wearing our masks, and a young woman at a sidewalk café did this obnoxious coughing pantomime as Charlea walked past. Charlea stopped, took off her mask, and leaning close over the woman, informed her that she had just tested positive for Covid and was wearing the mask to keep from spreading it. The woman looked quite alarmed. I hope she didn’t catch anything.

We also noticed a lot of pickup trucks in town with flags on the back, typically one flag for their tribal leader and another denigrating anyone opposed to their leader. It reminded me of what we used to see in Iraq with the Isis followers. These guys had Fords though, not Toyotas. We wondered if they had a clue who had first come up with the concept of putting big flags on the back of pickup trucks.

Needless to say, we weren’t all that comfortable with the current situation in Coeur d’ Alene, and we were more than ready to head back west the next morning. At one point we had been planning on making a quick foray into Montana but decided that heading back home was a better option.

On the way home, I mentioned to Charlea that after all these years I still didn’t know what exactly Coeur d’ Alene meant. Heart of. . .the mountains?. . .the lake?. . .what is an Alene, anyway? Shockingly, Charlea also had no idea. So we asked the Smartphone, which knows all. Coeur d’ Alene translates as ‘heart of an awl’. An awl is like an icepick, but you already knew that. The name supposedly comes from the craft skills of the tribe that originally lived in the area. Now there’s something you definitely did not know. 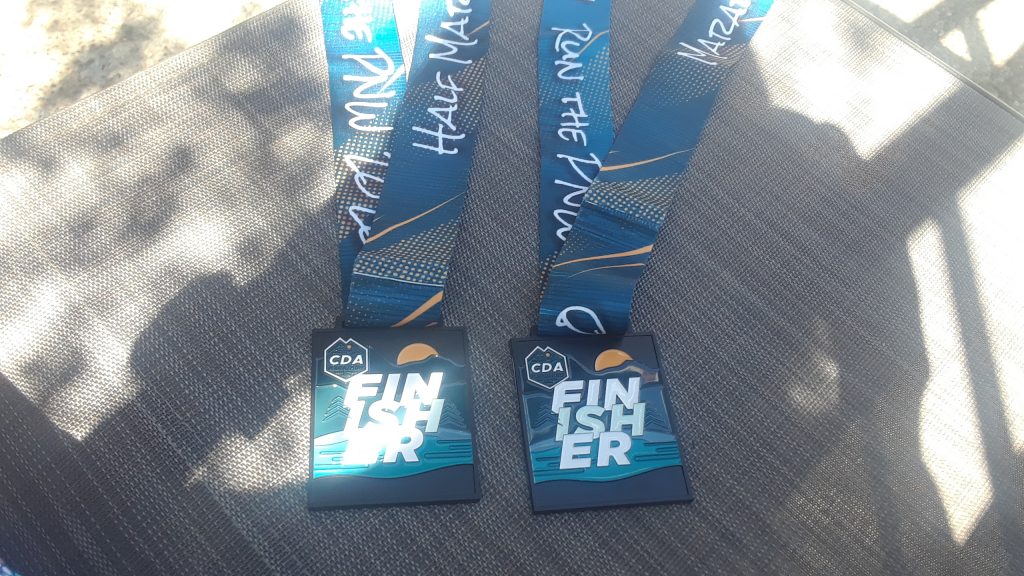