It was just a few days after Christmas. A cold, grey Christmas, celebrated alone by just Charlea, our dog, and me. Charlea and I had signed up for the Good Riddance 2020 Virtual race, Charlea wisely going with the 2.02 mile version, and me opting for the 20.2k option, which must have seemed like a good idea at the time.

I was quite pleased when the day I had chosen to run was actually pretty nice, for a December day. While cold and foggy at the start, the sun eventually burned through the gloom and made for good running conditions.

For a course, I used a paved trail alongside a river, which only had a few other people out on it, including fellow Silver Strider Dennis Zaborac. I found I was running better than I had in a while, which was encouraging. Considering that it’s 2020, things were going along quite nicely. At least they were until I realized I had forgotten to charge up my watch.

As I ran, I wondered if I had enough electrons left to make it the full distance. Being as it’s 2020, of course I didn’t. I ran out of battery and had no record of the run, meaning I would need to do it all over again.

The window of nice weather was only two days long. To my misfortune, the day that I needed to rerun my race was a nasty, cold, and wet one.

Once again I used the paved trail alongside a river, and this time I had the entire trail to myself as far as I can remember, although my memory of the day is hazy.

Unfortunately, that morning I had visions of running fast, but such was not to be. The consequences were that I was completely underdressed for the weather, with shorts and a light tee shirt.

Therein lies the problem; I was running by myself in miserable weather, pushing myself just enough to be uncomfortable but not near enough to be fast or warm. I was slowly becoming hypothermic and my mind was retreating into itself rather than focusing on the actual run.

As I got colder and wetter and my mind wandered, snippets of stories and fables came and went. I was so cold and miserable that I can only remember one, which must have come to me near the end of the race.

It went something like this: It happened a long time ago in a galaxy far, far away. A society of people lived happily together, and as with most societies, a Great Spirit (known by the people in this particular society as the Fairy Godmother) watched over them from afar, being careful not to micromanage the peoples’ lives or otherwise interfere too much.

The people liked to hang out with their friends and families, hug, kiss, and shake hands as the situation called for. They enjoyed restaurants, gyms, bars and hotels, and liked to travel and see other parts of their world. Most of all they liked to feel they were participants in something bigger than themselves, whether that entailed going to football games, concerts, running races or going to race expos. They were very social creatures.

But then something happened. They forgot how good they had it, and some of them sought power in mobilizing one faction against another. They abandoned truth, as lies were easier to believe at times, especially when it was important to feel superior to others. Without the anchor of facts, everyone knew they were right and the others were wrong, if not downright evil.

The end result was that the people became unhappy and divided. This made the Fairy Godmother quite unhappy too. She knew she needed to restore the people to their normal happy, contented condition. But how?

She thought and thought and came up with a plan. She would afflict them with a certain Condition, which would prevent them from doing everything that they loved. Only then would they realize how good they had it before they all went astray.

Suddenly, the people could no longer hug, or kiss, or even shake hands. No restaurants, no bars, no gyms, no hotels. No travel, and certainly no football games or concerts. No races, other than the Virtual kind. No expos either. To do any of those risked death, either to oneself or to those one loved.

If the people were unhappy before, this made them really, really unhappy and sad. And they really missed how it used to be, when they were a cohesive, happy functional society.

But even in their unhappiness, they kept on fighting with each other, and kept on ignoring facts and reality when it was convenient for their position.

The Fairy Godmother’s plan wasn’t working at all well. The Fairy Godmother didn’t like that. It seemed she would need to provide a few positive nudges to get the people aimed in the right direction. So she did three things. She made the days get longer, as more daylight leads to more happiness. She gave the people an Antidote for the Condition, but not too much, and not too fast. And she quieted the most divisive voices as they were only harming the people and glorifying themselves.

Slowly, the people’s predicament improved. They once again felt empathy, especially as the Antidote became more widespread and society needed to decide who was most in need of it the soonest.

Longer days always help, of course. People began to actually feel they really were all in this together, and they once again realized that fantasy might be whatever you want it to be, but reality is what matters, and reality always triumphs over fantasy.

Given time, the people once again could hug, kiss, and shake hands as the situation called for. They once again enjoyed restaurants, gyms, bars and hotels, and once again were free to travel and see other parts of their world.

And once again they felt they were participants in something bigger than themselves, whether that entailed going to football games or concerts. They started having actual races again, along with race expos. They were once again very happy, very social creatures.

And they no longer took it all for granted as they realized how close they’d come to losing it all. I think the only reason I remembered this particular fable is that just as it was all coming to a happy ending, I was coming up on my finish line.

As the finish came into view, so did (most importantly) my car and its heater. I peeled off my cold wet clothes, put on dry stuff and cranked up the heat. As I thawed out, I reflected on how good it felt to put 2020 behind me ​as I look forward to a new year where things are almost certainly going to be getting better, and when eventually we will once again have real races. Plus, the hugging and kissing stuff would be good, too. 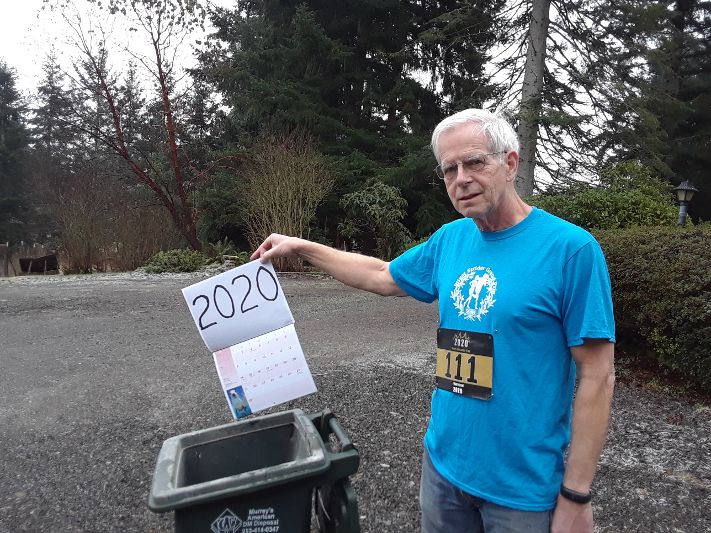 Did you realize that each time you say “Good riddance” you are quoting Shakspeare? Yes, the often used expression was originated by William Shakspeare in Troilus and Cressida, Act II, Scene I.  Where would we be today without this expression? “Good riddance” applies to some humans and insects as well as the year 2020.

The Good Riddance race was the first in the Silver Strider Virtual Distance Derby with unusual distances offered.  Judy Fisher, Arne Hales, David Anderson and Jim Dollar were the only Derby players to tackle the 20.20 mile distance.

The overall winners at 2.020 miles and 20.20 km distances were Silver Striders.