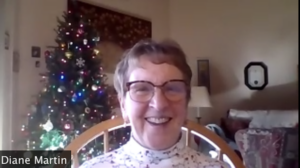 Going To The Sun Road

For those of you who have experienced some of our most cherished geologic treasures, you’ll recognize the title as the major attraction highway running east to west in Glacier National Park (GNP).

I was introduced to GNP several years ago through my sister-in-law who regaled us with sumptuous descriptions of this parks’ natural beauty following a trip she and her husband made that fall. I felt determined to visit it someday.

Fast forward to my late start running days. My Sierra Club friend would forward information on Vacation Races. (vacationraces.com) So when the Glacier National Park Inaugural Half Marathon info showed up for 2017 I was hooked. It didn’t take much to convince my daughter to sign up also. Due to a limited number of race participants, we signed up the first day registration opened. We spent the next few days hiking and taking side trips while we were there.

The park is located in the northwest corner of Montana. The race was scheduled for Saturday, June 24, 2017. Our early morning flight took us to Kalispell about 25 miles southwest of the park.

We rented a vehicle for the drive along Route 2 that hugs the southern border west to East Glacier Park. Since East Glacier Park lodge was the finish line of the half marathon, we took a room there. The lodge, built in 1913, and was stunning with its huge timber trusses in the lobby. Unfortunately, amenities in our room were sparse! We headed to the expo held outside in St. Mary about 20 miles north of EGP. The town is located on the Blackfeet Indian Reservation. Many of the volunteers were from the Blackfeet Indian Tribe.

There were lots of vendors and good wishes when we picked up our packets.

The start time was 7am and we had to be at the St. Mary bus pickup location at zero dark thirty. We headed to bed early. I woke up sometime during the night and checked out the window. Since the lodge is very isolated, with very little light pollution, the night sky was incredible; stars as far as one could see.

We boarded school buses, all 1,200 of us in the pitch black darkness. The bus lurched back and forth over what was presumably a narrow bumpy pathway. I can only describe our drop off point as a patch of wilderness with a single flood light guiding us to a circular grassy area. We crowded around the race director who was perched above us to make announcements. Standing shoulder to shoulder we shivered in the chilly predawn morning waiting for start time. It was announced that the first five miles were vertical with lots of switchbacks.

Promptly at 7am the gun went off to the music of Spirit in the Sky…what a send off! Yes, those first five miles were a challenge, and to our right the land fell away with a vertical drop off. The Rocky Mountain scenery was incredible! 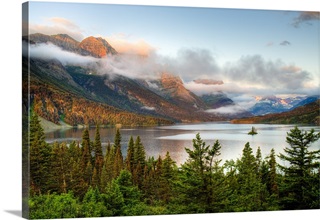 A unique sight was the four wheelers that would occasionally zoom pass us; a driver and a passenger carrying a rifle. The Blackfeet were in charge of safety. Thankfully there were no grizzly encounters! Soon the climb gave way to a long downhill and I could now make some headway with my time. The rocky scenery faded with a more forested setting and eventually flattened the course road to meadow areas. The lodge now only a few miles away. Finishers were greeted by cheering spectators and the lodge lawn loaded with finishers celebrating victory with a good variety of fruit and snacks. The medal was a wooden base with a picture of the park.

With much of the day left, we traveled to the eastern start of Going to the Sun Road and drove along the narrow roadway with gorgeous views of the mountains. 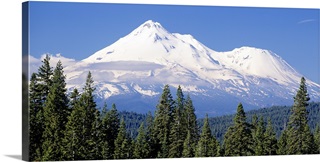 A bit short of half way to the west and close to the Continental Divide we were stopped by snow, could go no further.

We spent another night at the lodge, then headed west early in the morning. Again we took the Going to the Sun Road but this time from the west side heading east. But again, we were stopped mid way due to heavy snow covering the roadway!

I would recommend Vacation Races for any of their national park half marathons…just remember to sign up early! I’m thinking about my next one???