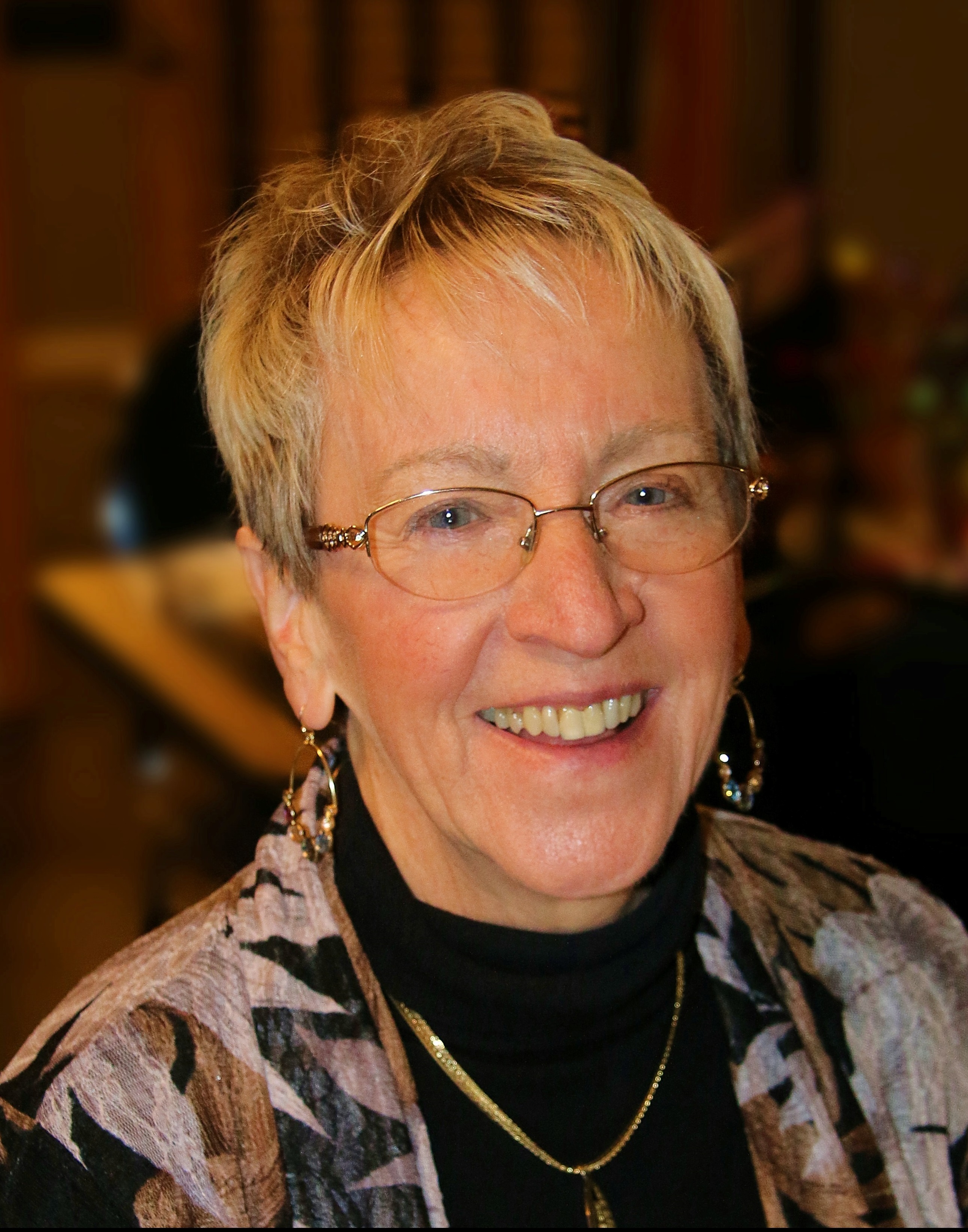 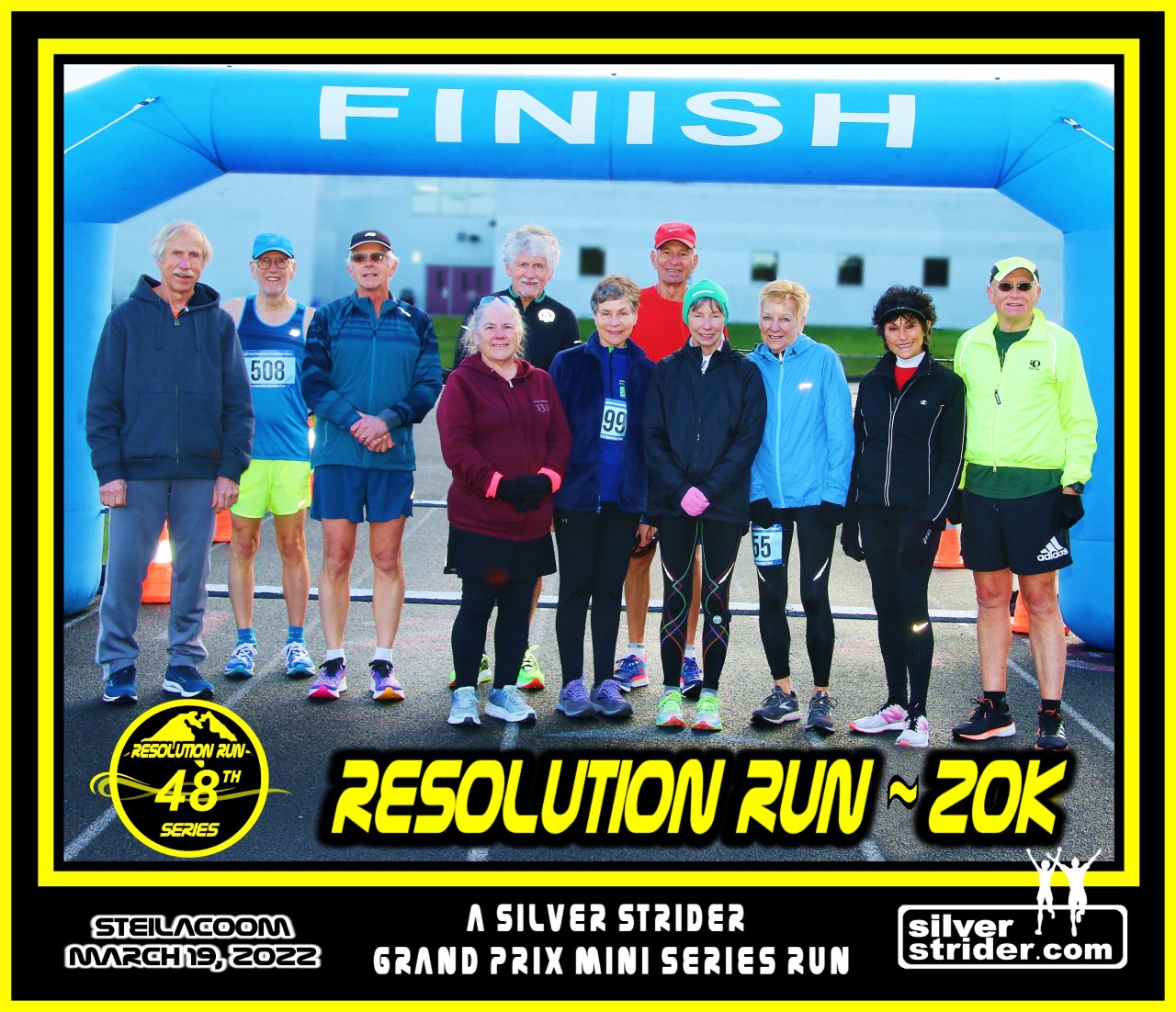 The great benefit of this four event series is it provides a “step up” program if you are training for a half or full marathon. Facing a half marathon in May, I choose to do the 10K, the 15K and the 20K final. I was so happy when the 20K was added to the Grand Prix miniseries! Plus by doing 3 of the 4 events, I would receive a medal.

Due to Covid, runners did not have access to the Steilacoom High School building where the event takes place every year. Bummer since we look forward to indoor restrooms and the yummy variety of food following the race. But port a johns were plenty and snacks and water were available this year.

The day prior to the race, an email was sent out stating that the race event closed promptly at 1pm; so if your time appeared to be longer than 4 hours they advised an early start of 8am. Considering that my training run of 11 miles the previous weekend was close to a 20 minute pace (yea, I know…slow even for a walk), I choose to do the early start.

Friend and speedy Silver Strider, Tiare promptly replied to my text to not forget about Burs breakfast/lunch following the race, thank you!

Only a few cars were parked in the high school lot when I arrived; evidence that not many would be doing the early start. So imagine my delight as I headed toward the track to get my bib and saw John Phillips.

John may have been a little hesitant when I opened the trunk but was pleased to finally receive his Grand Prix 2020 trophy!

After putting on my bib and one minute before 8am, I was the only person at the start line. I approached the tech guys and yelled “I am doing the early start”

About half way around the track, a female runner begins to pass me and says she’s doing the 20 miler. We wish each other well and off she goes.

All 3 races are an out and back beginning at the track and heads out to mainly residential areas. Some gentle increases in elevation going out with long flat stretches along Military Road and North Gate Road heading towards Fort Lewis and the turn around.

Since I had done 2 previous races in the series, I was not worried about getting lost. Sure enough cones were set out at every turn even those areas that normally have police directing traffic. Mother Nature ignored the weather prediction of rain showers and provided a nice chilly morning that a long sleeve shirt and light jacket was perfect. Later blue sky and sunshine was the order of the day.

About a mile in I was doing okay, some running and power walking when an SUV stopped alongside me; the driver rolled down his window and asked, “Early start?”

“Enjoy, do well.” he stated and drove off.

Wow! Did I feel honored? It was Race Director extraordinaire Darrin Hatcher, cruising the course to make sure all was in order for the official start of the race. 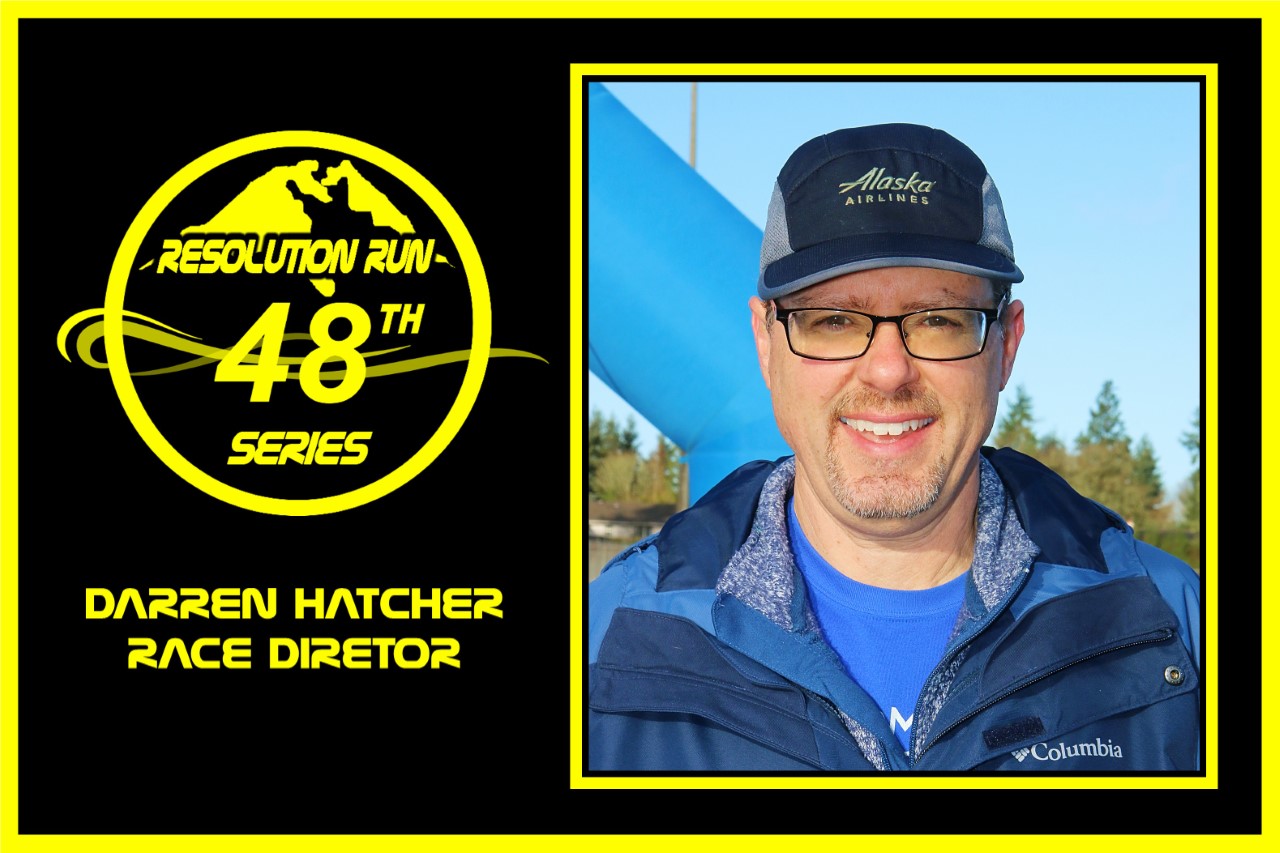 Another mile in and I’m just enjoying the spring season. Daffodils, Hyacinths, and the almost blooming Cherry trees amongst neatly kept yards.

Wondering when I would be taken over by the first runner out, to my surprise I almost made it to the turnaround point of the 20K when the sound of speedy footfalls could be heard. I turned around and stepped back out of the way of first place 20K racer, 39 year old Tyler Nugent. I whooped and clapped as he shot past me and the water/Gatorade stop.

Later I found out his pace was a whopping 6:05! Do you know what Silver Strider Dave Sherman and Judy Fisher have in common with Tyler? Age average percentage of 74.5! Double wow!

Another good reason for the early start is you get to see all the Silver Strider friends pass you by twice. Yes, I saw them first heading towards me just beyond the turn around and again as they ran past me on their way back just a few minutes later. It was so great to see the smiling faces of so many accomplished athletes. Plus it provides motivation to the finish line. Steve Husko was kind to offer to pull me up that steep hill on Military Road.

Reaching the track, how neat to see Gretchen Ramsdell and Patty Husko there to cheer me on! I missed the group picture at the start, but Flash Fisher was there at the finish line, yahoo! Guess who passes me just before I cross the finish? It’s Rob Bondurant who did the 20 miler in an impressive time of 2:38:06! We’ll be ready to snag you as a Silver Strider soon Rob!

I made it before the 4 hours and with plenty of time to make it to lunch. Hugs from Silver Striders cheering everyone over the finish line…can’t beat that! Again, Silver Striders made up over half of race participants; 54.5%, if there’s a race, we’re there! 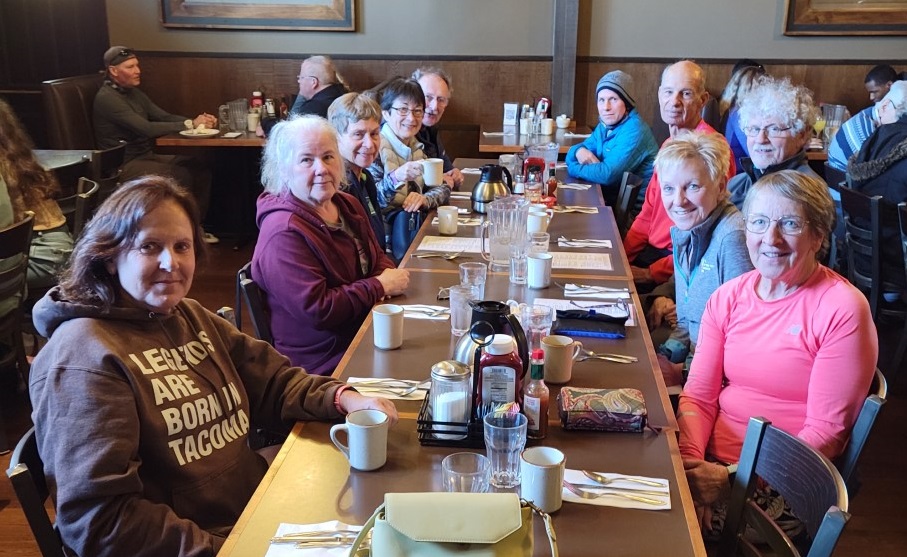 Jerry’s notes: It is only March and we already have 6 Series finishers. The 20k saw some new Series age group leaders too. The competition is close especially the 65-69 group for men. See Grand Prix Series standings. The first Silver Striders were 67 (Dave) and 70 (Sandra)! Also, congratulations are in order to John Phillips, age 79, and Judy Fisher, age 78. John and Judy were the oldest runners to tackle the demanding 12.4 mile course. 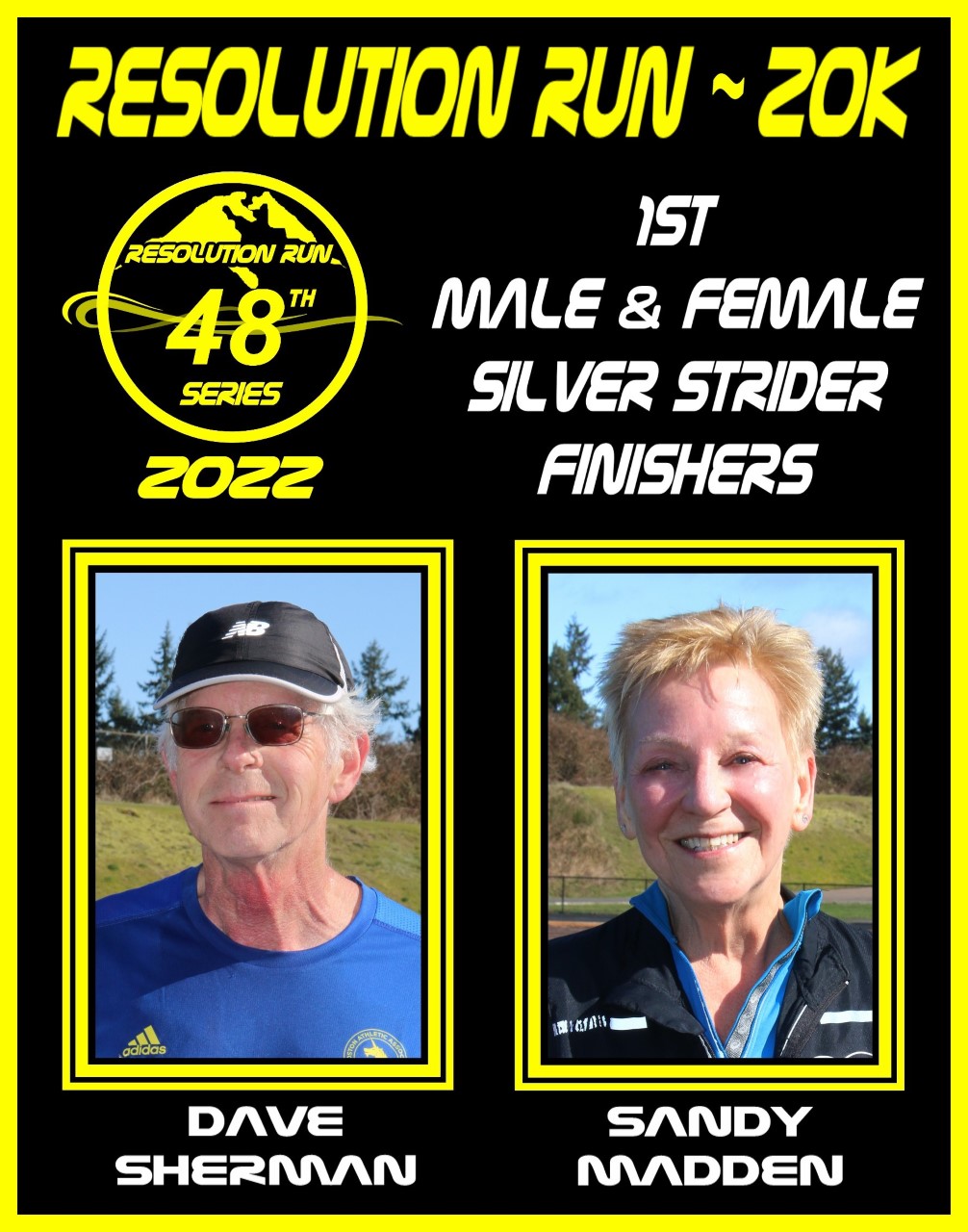 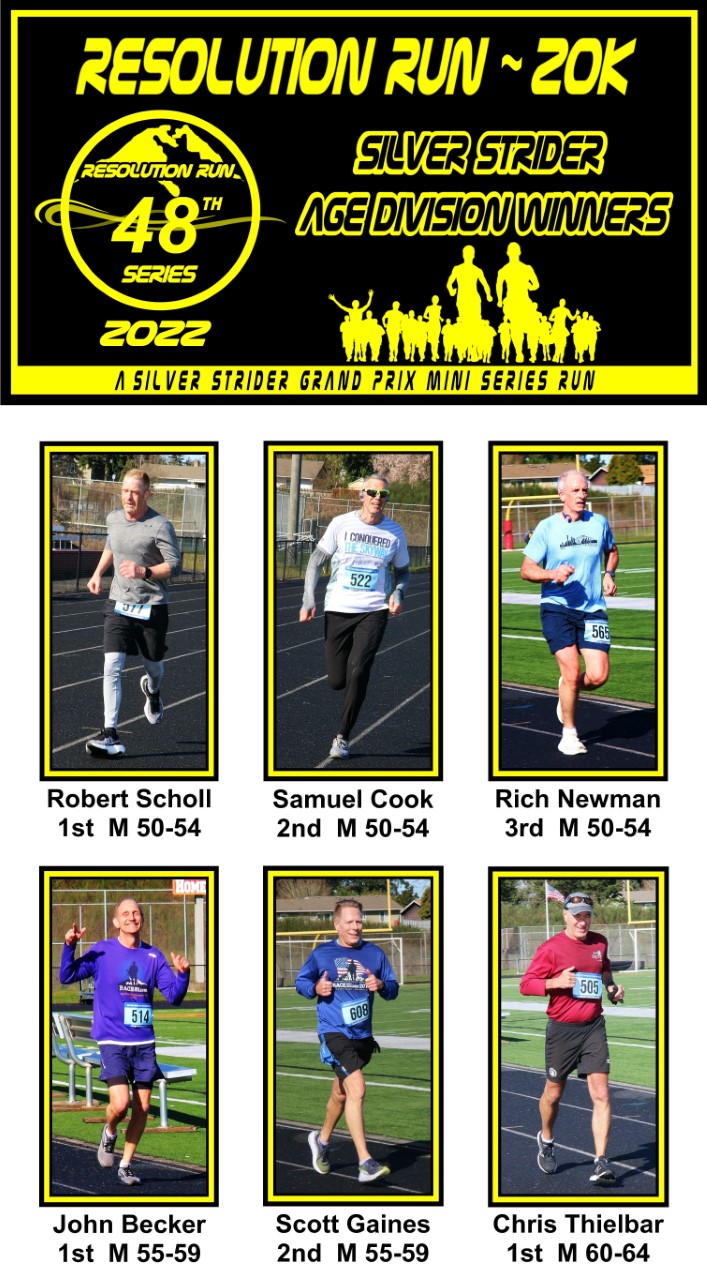 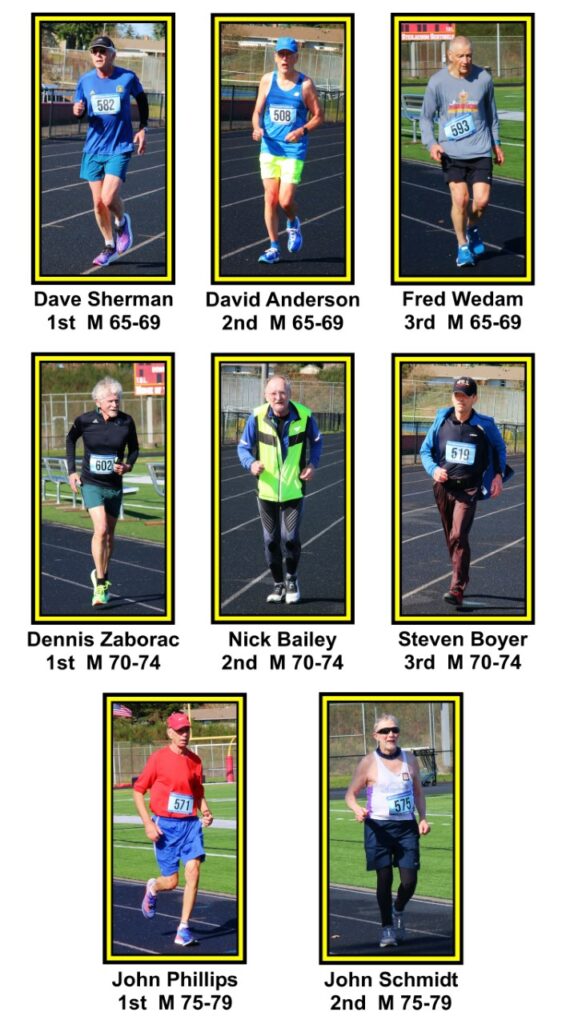 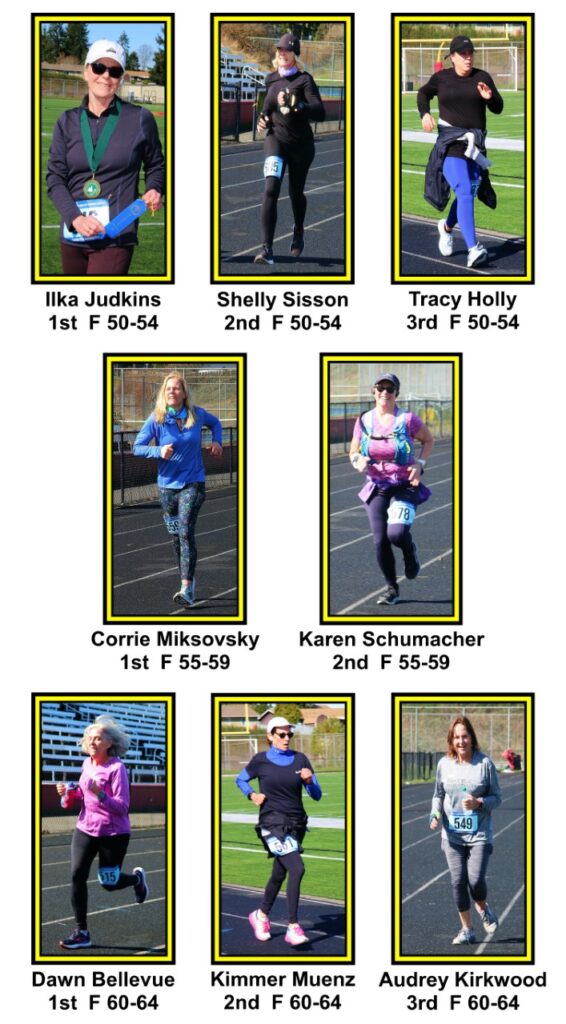 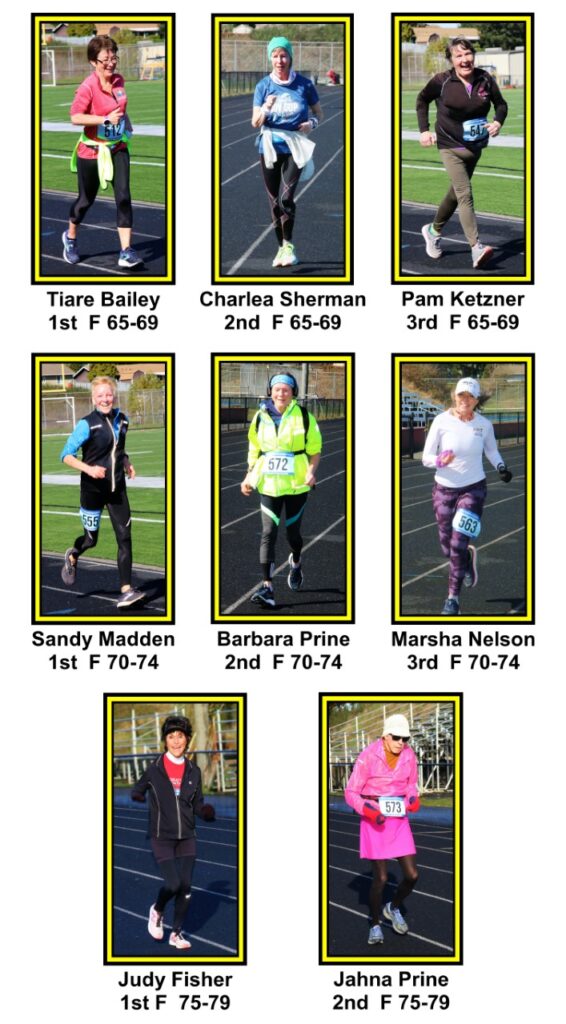 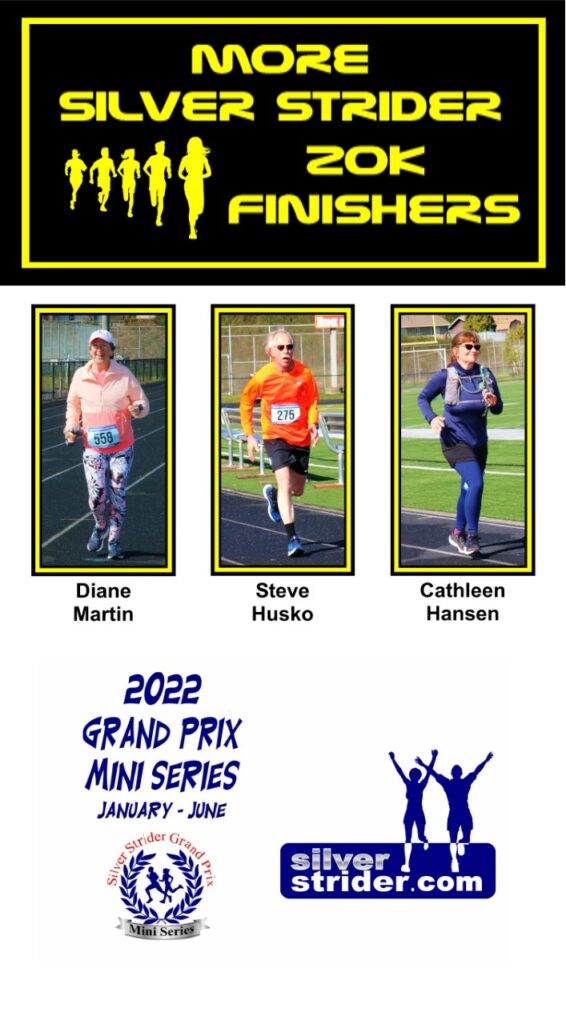