Times are changing. Charlea’s and my last in-person race of any significance was the Coeur d’ Alene Marathon last summer. At the time, the feeling was of figuring out how to put on a race in the midst of the pandemic. Now, the feeling is that we are beginning to return to the more normal races that we know and love.

We have enjoyed doing the North Olympic Discovery Marathon series of races for many years. Victoria Jones, one of our favorite race directors, has done a great job over the years of making this one of the best races around. Who better to show us how to put on a race transitioning us back towards normal

We arrived in Port Angeles on Saturday and promptly went to the expo. The expo for this race has always been small, but this year’s was smaller than usual.

One addition was a table where you showed proof of vaccination and then received a wristband that declared you Vaccinated. This made us feel special and privileged, although actually the wristband didn’t really make much difference in what you could and couldn’t do. 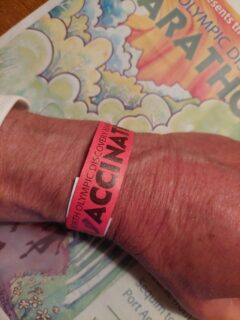 The 5k and 10k were moved to Saturday to spread out the crowd, instead of being on Sunday with the longer distances as is usually the case. Charlea and I both chose the half marathon, so on Sunday morning we walked over to the transit center and and took the bus to the start.

At the start, runners were sorted into numerous tiny corrals of about 20 people each, and corrals were started a minute apart. This was done to spread runners out on the trail, which can be narrow in places. I started in the first wave so of course I followed tradition and went out too fast.

After a half mile, my sketchy hamstring informed me that I was going to either slow down voluntarily or else it was going to make me walk the remaining 12 ½ miles. I chose to slow down. Several miles into the race I passed a group of women with pink shirts for an anti-domestic violence group. One of the women was an above-the-knee amputee on crutches. I was impressed by the determination and stamina needed to do a half marathon on crutches.

Once we were out on the course, the race was identical to what you’d expect at a pre-covid race. We didn’t need to wear masks while running and didn’t take any extraordinary precautions to maintain social distancing. Particularly as a vaccinated person, I totally forgot about covid during the race. 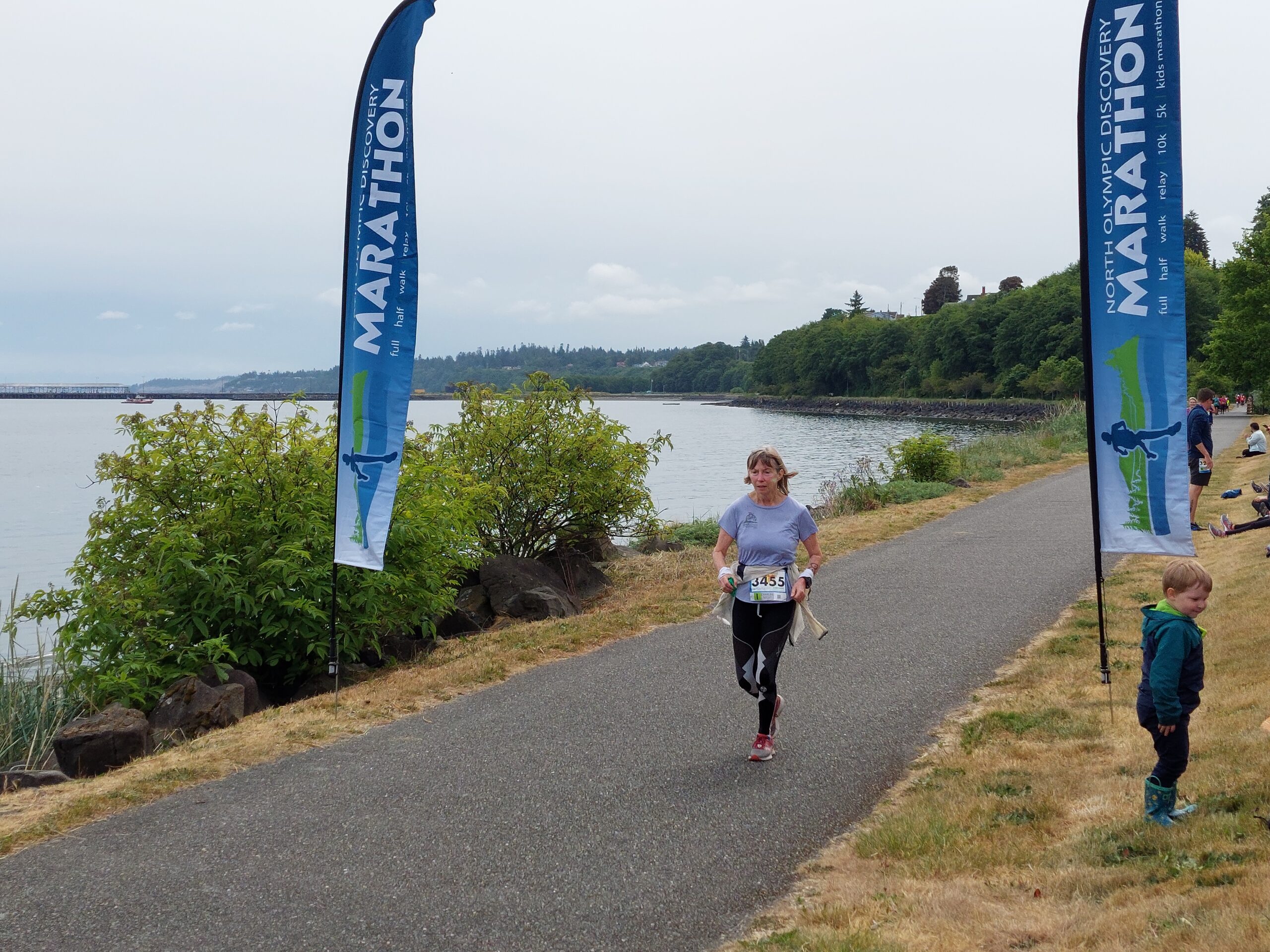 At the end of the race, the finish line festivities were scaled back from the usual activities at this race, yet they were a good step toward normalcy. Food consisted of grab-and-go snack packets, bananas, and apples. There was no live music and awards were mailed out. 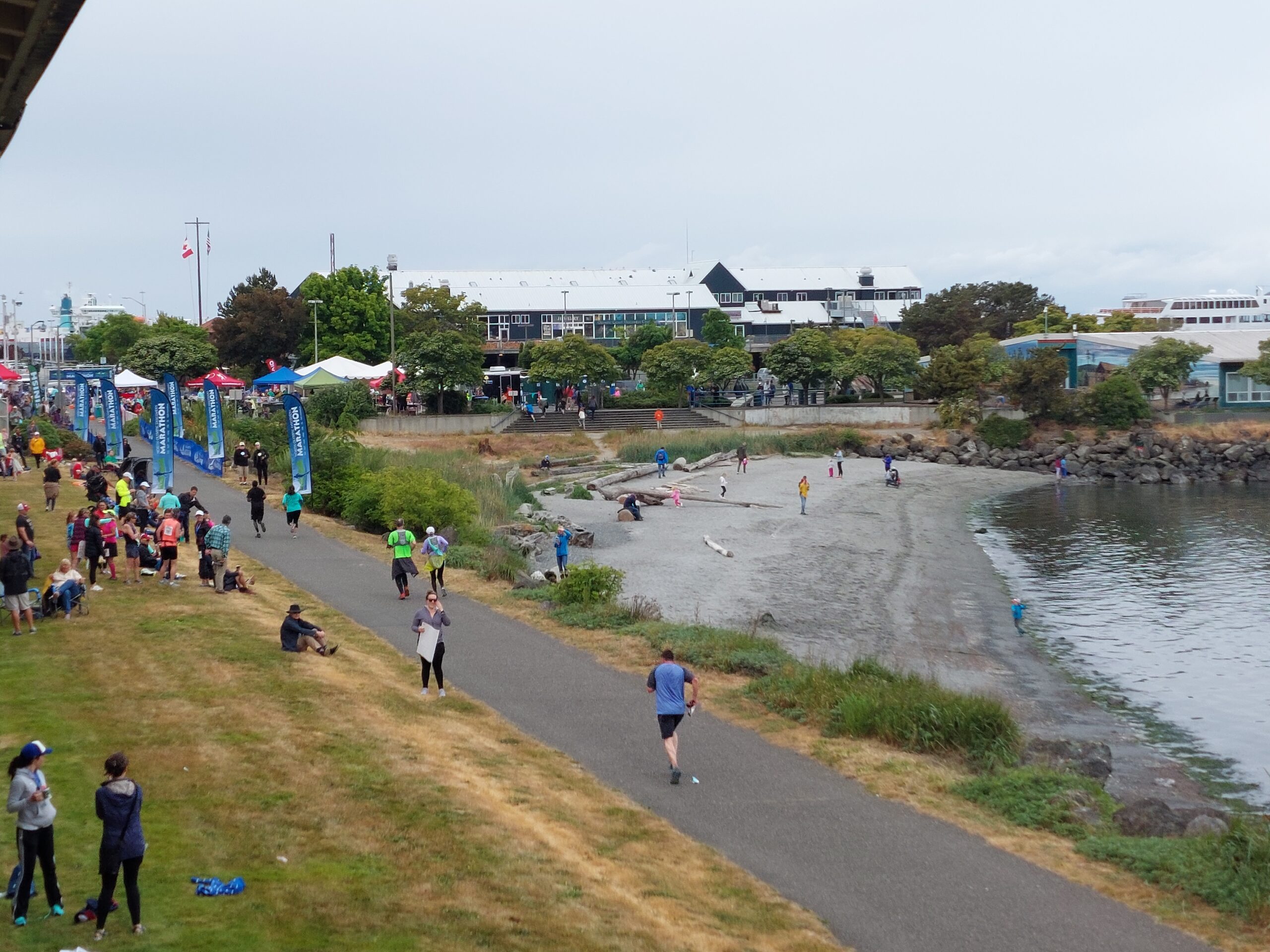 There was no beer garden either, although we could get a free beer at a nearby bar. Spectators were allowed and many people were there cheering on the finishers. There was an announcer who called out the finishers’ names and hometowns.

Several hours after we finished I learned something amazing about the amputee woman with crutches in the pink shirt. A resident of Port Angeles, she had survived a near-fatal domestic violence attack and had lost her lower leg to cancer. Her name was Dana Lawson, age 48. While I had been impressed at her determination and stamina in doing the half marathon, I was mistaken. No, she did the full marathon, starting at 2am and finishing 11 hours later, all on crutches. It boggles the mind.

David Anderson – “I ran the North Olympic Discovery Marathon yesterday as a live, non-virtual, race in Port Angeles. It was great. The wind had settled down significantly from the day before, when I ran the 5K there. So I was able to get a new PR, by over five minutes, of 3:38:22.
The Silver Strider Distance Derby has been wonderful for me, giving me many opportunities to run hard and test my fitness. In my case, as I wrote in my article, 2020 had me especially well prepared, and I achieved PRs at 15K, the Half, 20 miles, and the Marathon.
Thank you very much for putting this together and managing it for all of us.”

Arne Hales – “I started with the early walkers.  Dave Anderson passed me probably about half way. NODM has several race photos also.  I’m sort of glad that the T&H Series will be all 5K’s.”

Jerry’s notes: This was the final race in the Distance Derby. It ended in a photo finish!
Special congratulations are in order to the four Silver Striders who reached a perfect score of 105 stars for the Series. They are, David Anderson (M65-69), Arne Hales (M75-79), Judy Fisher (W75-79), and Jim Dollar (M 80-84).