The Boston Marathon and Bus Ride

by Dave Sherman
with photos by Charlea Sherman and Bruce Fisher

Here we go again, this time to a unique Boston Marathon. This year’s race took place in October rather than the traditional April and had a much smaller field due to Covid restrictions.

In order to pick up a race bib, all entrants had to either show proof of vaccination or pass a covid test administered on the spot. Can you image doing all the training and traveling and then gambling on passing the test? We opted for the vaccination proof.

Another change for this year was that they used a rolling start, where, as in the past, you got on the buses out to the start at Hopkinton according to your qualifying time and bib number. But this year, once the buses reached Hopkinton you had only about 20 minutes to take care of business and make your way to the starting line and start running.

There were no corrals, no waiting around, and no starting gun. This was intended to reduce the crowding that you’d normally have with corrals as well as to spread runners out on the course. Runners were required to wear masks on the bus and up until they crossed the starting line.

Nearly every time I go, something unexpected happens with my race, so I was curious what this year might have in store. I knew it would be a fairly slow and difficult race since I missed most of the first half of my usual 16 week training program due to injury, and I have noticed such minor details do tend to make a difference.

It so happens that my college roommate’s daughter was running as a charity runner this year. As she had never run a marathon before, she had a very high bib number and started near the back of the field. It turned out that I started four minutes after her.

Knowing that the later miles would be hard due to my reduced mileage base, I was careful to start out slow and take it easy the entire first half. Although the course was less crowded due to the rolling start, virtually everyone around me was slower than me so I did a lot of weaving for well over halfway.

Weaving is very bad for conserving energy, and I knew that, but really had no choice. Sure enough, the later miles were difficult and slow, and at the finish I was more than glad to be done.

So, why was I starting well behind most of the charity runners? That brings us to the ‘Bus’ part of the story.

The buses head out from Boston to the start in convoys of about twenty buses, all following the lead bus. When the lead bus driver gets lost, it makes for a big mess. The same result applies when the driver knows how to get to Hopkinton so he ignores the details about entering town on a specific road.

On race day, only one road is open into Hopkinton, from the south; all others are closed off for security purposes. We were driving through the woods approaching town from the north when we came upon a roadblock. The cops said it was a mile and a half uphill into town and we could walk if we wanted to, but no bus was going past them.

We opted to stay on the bus and find the correct road. Meanwhile, the rest of the buses were turning around to go back a fair distance to the freeway where we’d made the wrong turn.

Not us, though. We set out on our search for a way to get from the north to the south side of town. First we drove down a little road that turned into driveways then nearly got stuck doing a three-point turn. Once extricated from that, we returned past the roadblock and tried another road which eventually had a sign saying it was closed ahead.

At this point we’d been on the bus an hour and a half, and several of the passengers informed the driver that it was time for a pee break. So, the bus simply stopped in the middle of the road (there was no traffic in this neck of the woods) and those in need headed into the woods.

We resumed our search, but it wasn’t looking promising and our faith in our driver had faded badly. It was becoming obvious our driver didn’t know how to get to the correct road on the south side of Hopkinton and phone maps didn’t show road closures in enough detail to navigate effectively.

Anxiety was boiling over as the passengers rebelled and told the driver to just take us back to the roadblock and let us out, at which point we started walking. As I had sat out the pee stop, I now took my turn behind a tree.

That put me near the back of the pack, where I could see some of the more anxious passengers jogging up the hill towards town, but most just walked. After a lovely mile and a half stroll in the countryside, we reached the main intersection in town, near the starting line.

The officials and volunteers were quite surprised to see us appear from the wrong direction and had to move some barricades to let us into the secure starting area. The starting line was scheduled to close at 11:30 and I started about 11:15, an hour later than my scheduled starting time and four minutes behind my charity runner friend.

Part of our Boston tradition is that we always take the same flights as our friend and fellow Silver Strider, Carol Sexton. I’m pleased to note that Carol got second out of 368 in her age group, a remarkable accomplishment at Boston. And right behind her in third was Becky Backstrom, who you’ll remember from the Battle of the Boomers. purple shirt races.

Me? I scored 188th out of 364 in my age group, solidly mid-pack. Considering everything, I’m just fine with that. 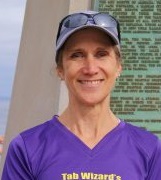