The Tale Of Two Runs

As I was approaching the ‘golden’ age of 50 I thought running a marathon would be a worthy goal to pursue. I had just retired from the military, and was still in pretty good shape. I thought, “how hard could it be?” After all, I was used to running three to five times a week, sometimes even venturing up to a distance of 3 miles!

So I put together a running plan and began training for the 2011 North Olympic Discovery Marathon. I thought I was doing well on my running plan….but I think I slacked off quite a bit towards the end. I know I wasn’t running as consistent, and I wasn’t achieving the distances called for on the training plan.

“Oh Well” I thought, “It will be fine”. After all, I felt great for the shorter distances. Well, race day was here before I knew it and I found myself with a crowd of runners at the starting line.

With the thrill of running my first race, and the excitement of the crowd of runners, the gun went off and we headed out.

The NODM course in 2011 was a meandering course from Sequim to Port Angeles. I was off with the pack, and felt really good… for the first half of the marathon. Then I found out what a “runners wall” felt like, and for the remaining 13 miles I had only enough energy to walk, with an occasional spurt of energy for a few seconds of jogging.

Also, one of the factors outside my control was the weather – it was beautiful, and about 10-15 degrees warmer than the temperatures I had been training in. Staying hydrated also became a factor.

My wife and son traveled with me to the race to support me, and I remember telling them where the good observation points would be, and what time I expected to run by there. At the 13 mile mark I hit my goal time (around 2 hours), and my wife and son got to see me run by.

However, by the next view point, they were waiting and waiting for me to show up, and they began to get concerned. Finally, half an hour after my planned time, I showed up. From there on out my check-in times got longer and longer.

My goal for this marathon was to run it in about 4 hours. My finish time ended up being over 5 hours and 45 minutes! My only consolation was the great support from my wife and son. They patiently waited for me at the view points, and for hours at the finish line.

My son Christopher, even ran the last stretch to the finish line with me.

Afterward, all I can remember is riding home in the fetal position in the back seat of the car. It would be six years before I attempted another marathon.

In 2017 I finally gathered up my courage to attempt another marathon – the Columbia Gorge Marathon in Hood River, Oregon. The setting was beautiful. The Columbia Gorge in the fall with all its autumn colors. 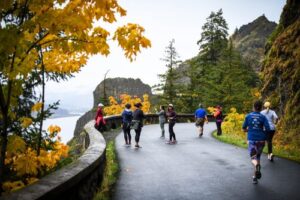 Again I put together a training plan, this time working hard to finish well in the last half of the marathon. I worked especially hard on the longer distances, achieving 20+ miles a few times during my training.

I had a good pace going through the first half of the marathon, and I kept thinking, “I just have to keep this up for the rest of the race”. For the most part I was able to keep my pace, faltering a little between 20-23 miles. I may have pushed just a bit hard 10 miles earlier, and should have slowed a bit to save energy for the last six miles of the marathon. However, I was able to finish strong, and the training I had done all summer paid off .

I finished the Columbia Gorge Marathon in a little under 4 1/2 hours. I can tell you, I struggle with distances longer than a half marathon. I have found that half marathons are my sweet spot in running, and anything over that is grueling. However, I have a goal to run at least one more marathon… and now that I’ve had a couple years to “rest”, I think I’ll be ready for another one.​