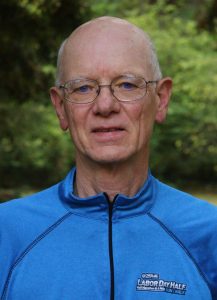 After the final Tortoise and Hare run I heard several SS talking about how it was strange not to have either the Santa Runs Tacoma or the Kent Christmas Rush ‘targeted’.

As it turns out, a few of we diehards could not seem to get enough of the winter running.

At the Kent Christmas Rush the morning started windy and rainy.   I arrived as one of the first to park (why do I always have to be an hour or more early?) and noticed Bruce and Judy Fisher also parking.

Moments later Bob Davies parked between us.  I began to wonder if I had missed the memo.  As usual for Kent Parks events, the race bib pickup was easy.  We were parked close enough to the start line that I waited until just before the scheduled start time for the 10K before I ventured out.

The weather seemed to abate for most of my time on the course, but picked up again near the finish line.  Apparently it is an annual tradition for Dennis Zaborac and Sandra Madden to be at the finish handing out Christmas goodies to the kids.  Silver Striders were well represented at the awards.   Ray Arrington was pleased with his improved time over last week and his 3rd place finish.  Good effort Ray! 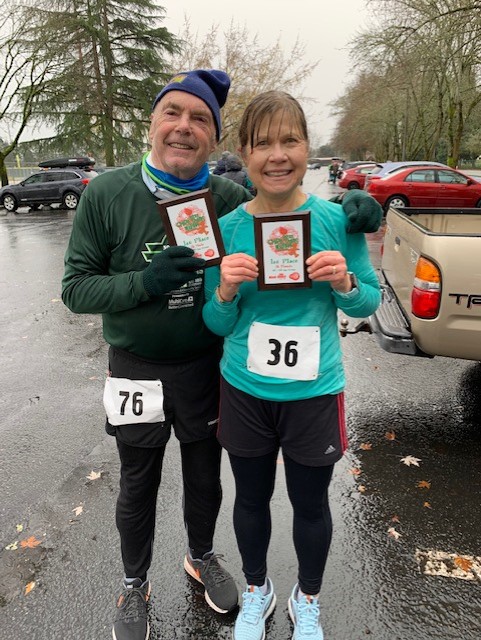 Bob Davies asked me to take the attached photo of he and his running partner with their first place awards. He thanked me for running the 10K instead of the 5K. I asked him to send me the photo and I would submit it to you and perhaps you might put it on the Silver Strider site.

I thought I would give you this short write up above just in case. I also know that the Shermans as well as Mike Henderson and Tim Oguri ran the Santa Runs Tacoma 5K.