by Jerry Dietrich
with photos by Bruce Fisher

I can hardly believe how lucky we were to find JoeSeppi’s Italian Restaurant for our awards party. Betty and I scoured Gig Harbor, Tacoma, Tukwilla, and other areas trying to find a location that would accept us.

“We can’t do it”, we heard over and over. “We laid off most of our staff during Covid and it will take several months to hire and train new people”.

So you can imagine how excited we were to receive a call from JoeSeppi’s inviting us to hold our event in their recently remodeled banquet room.

The new owner, Zena Dodson (below) graciously welcomed us. Though they were also short staffed, she promised to provide extra help as needed. 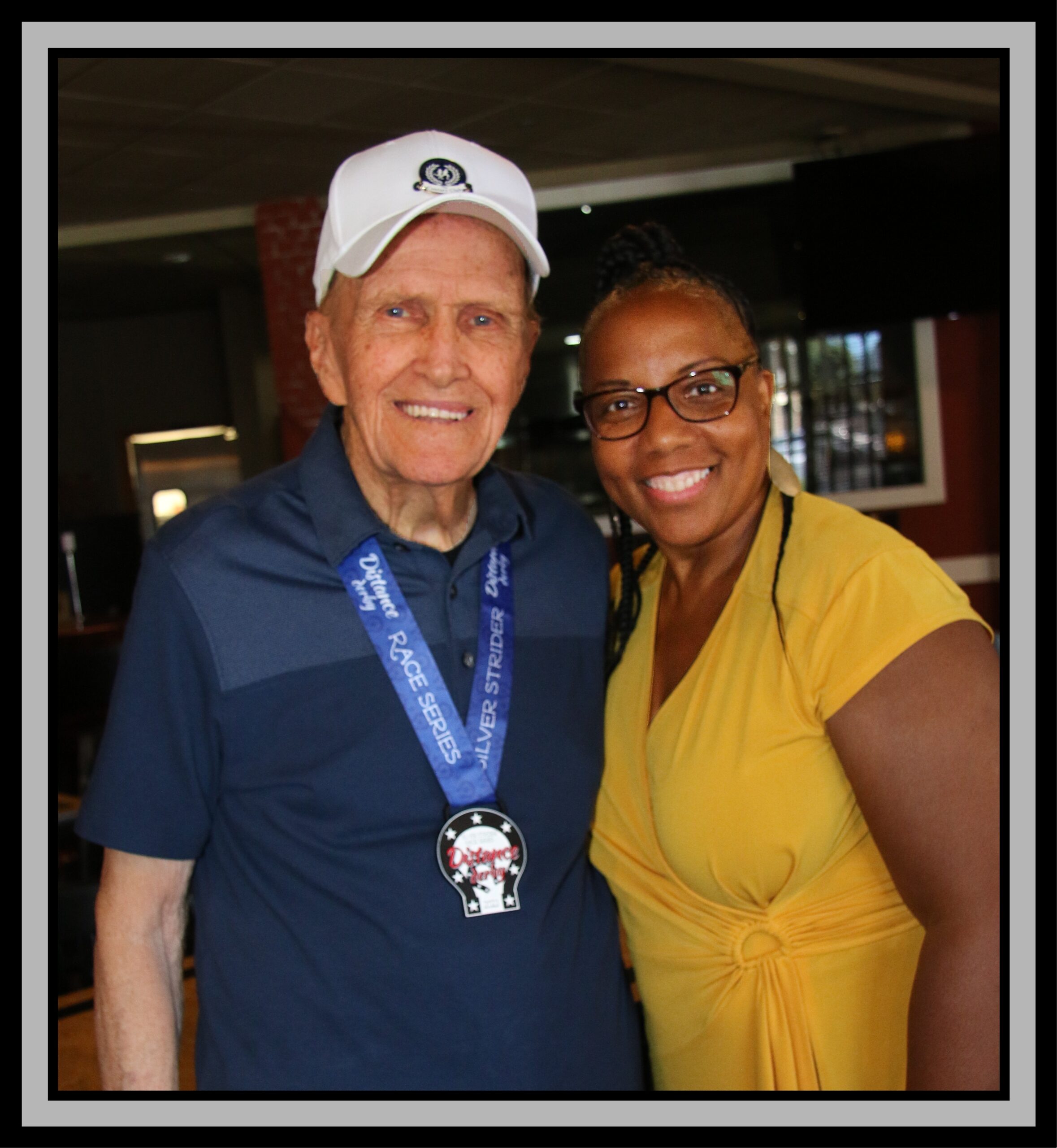 And boy, did she do a good job! Zena had lots of help and everything went off perfectly. Our sincere thanks to Zena and her staff.

I welcomed everyone in attendance and introduced our host Zena Dodson. Next we observed a moment of silence for our departed Silver Striders , Chloe Parr and Barbara Macklow.

Afterward, we ordered lunch. The menu was great and the food superb. The tables were decorated by Nanci Larsen with centerpieces offering clever sayings. The trophy table had “Welcome Back” lettering across the front. 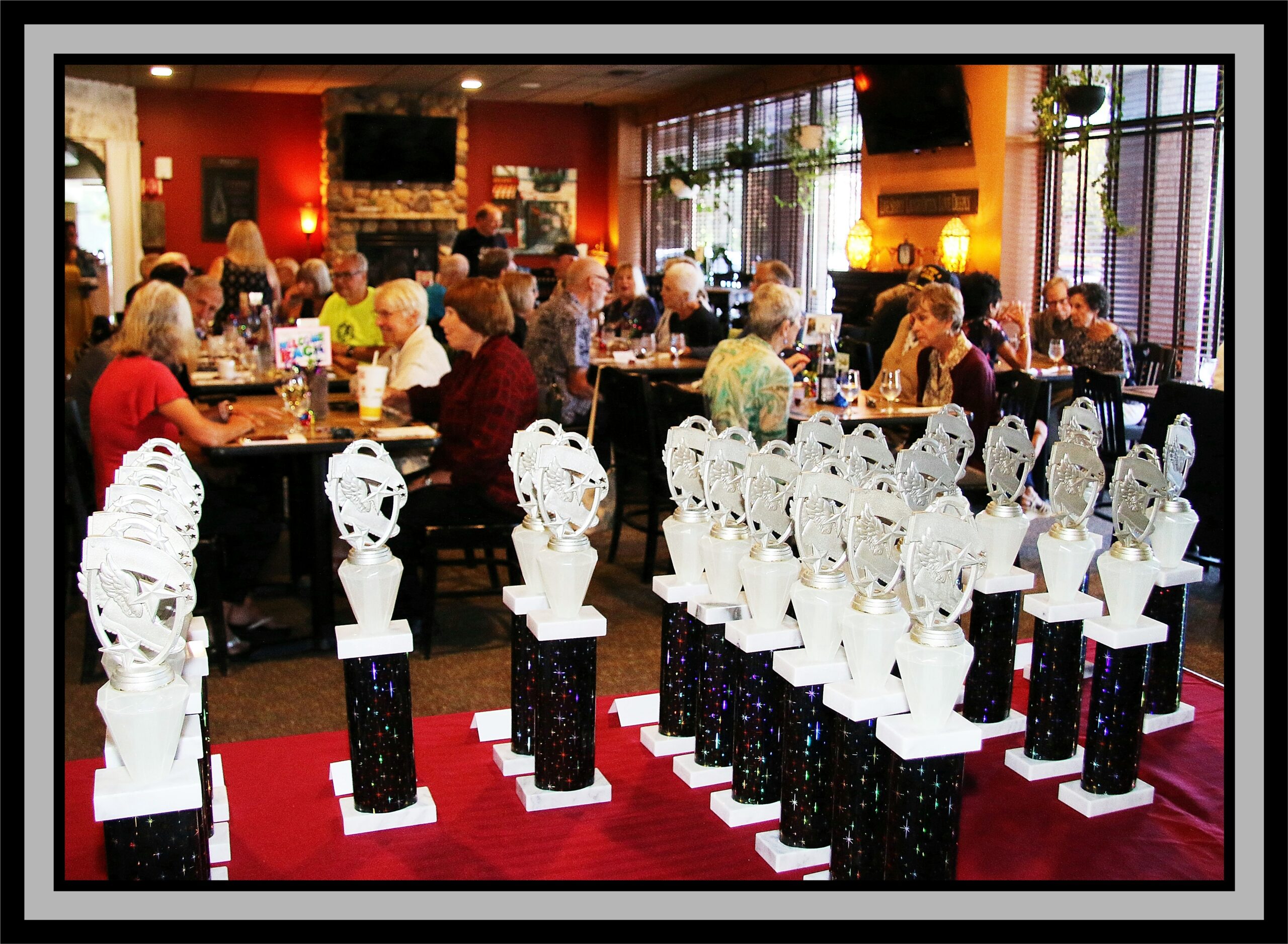 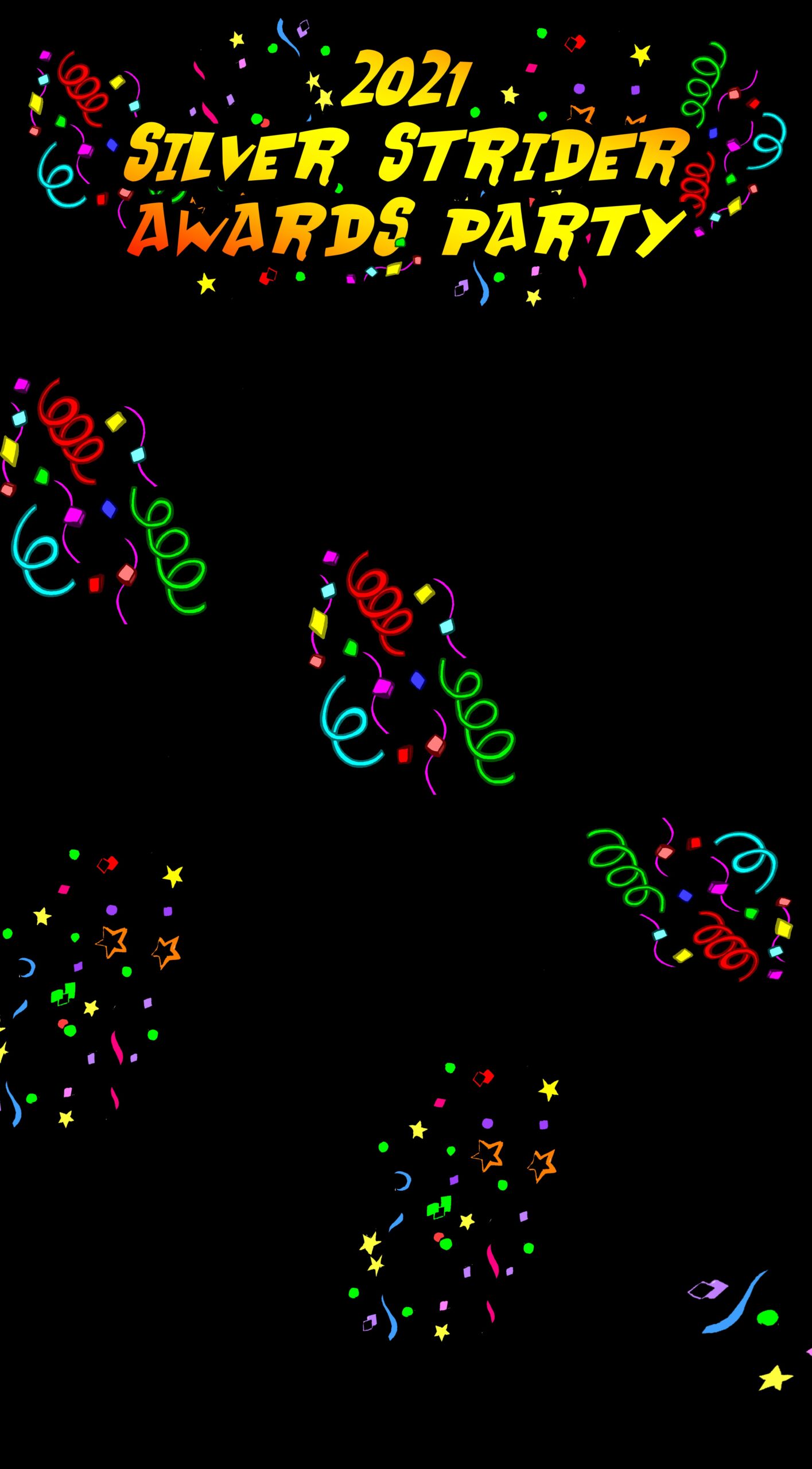 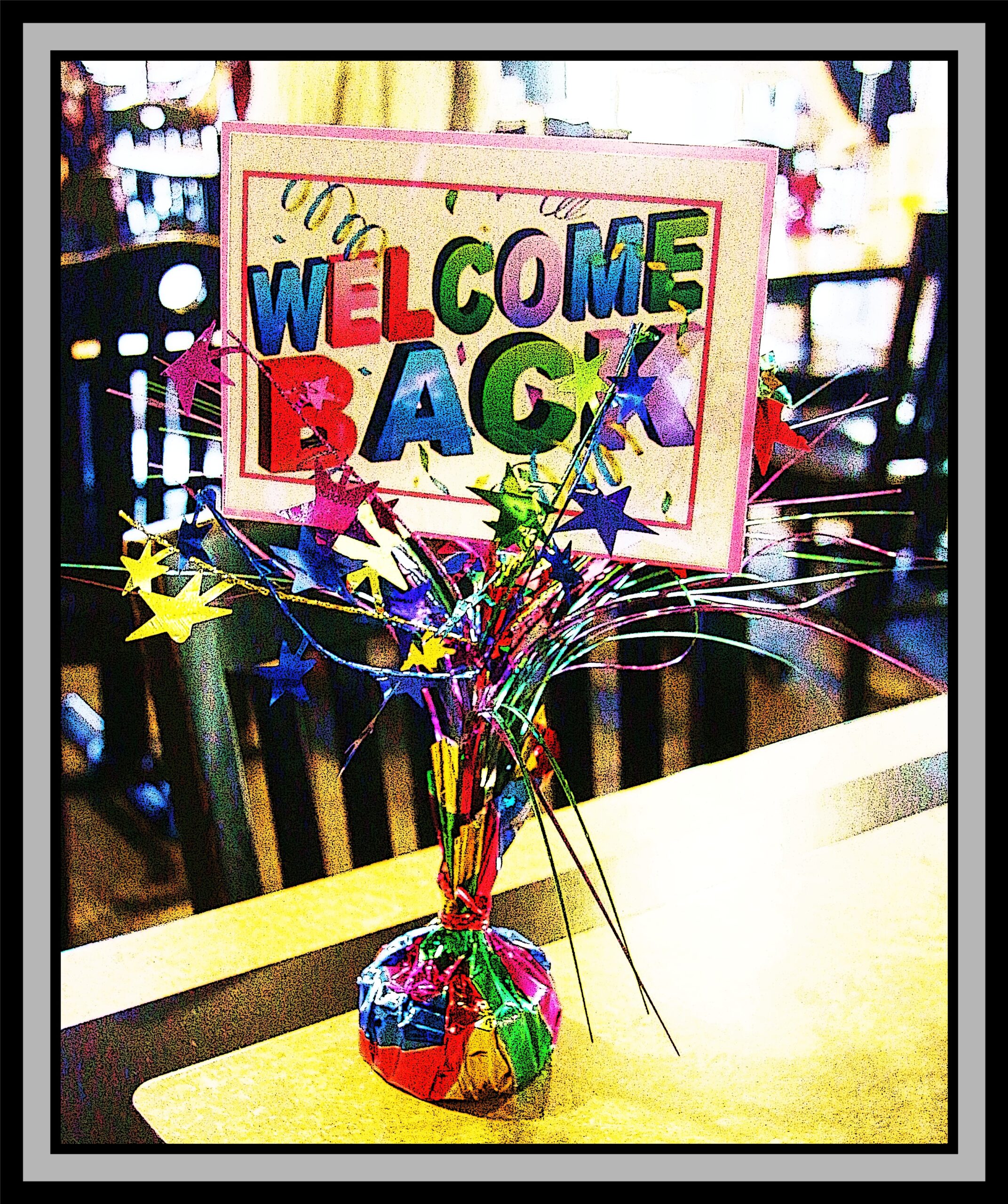 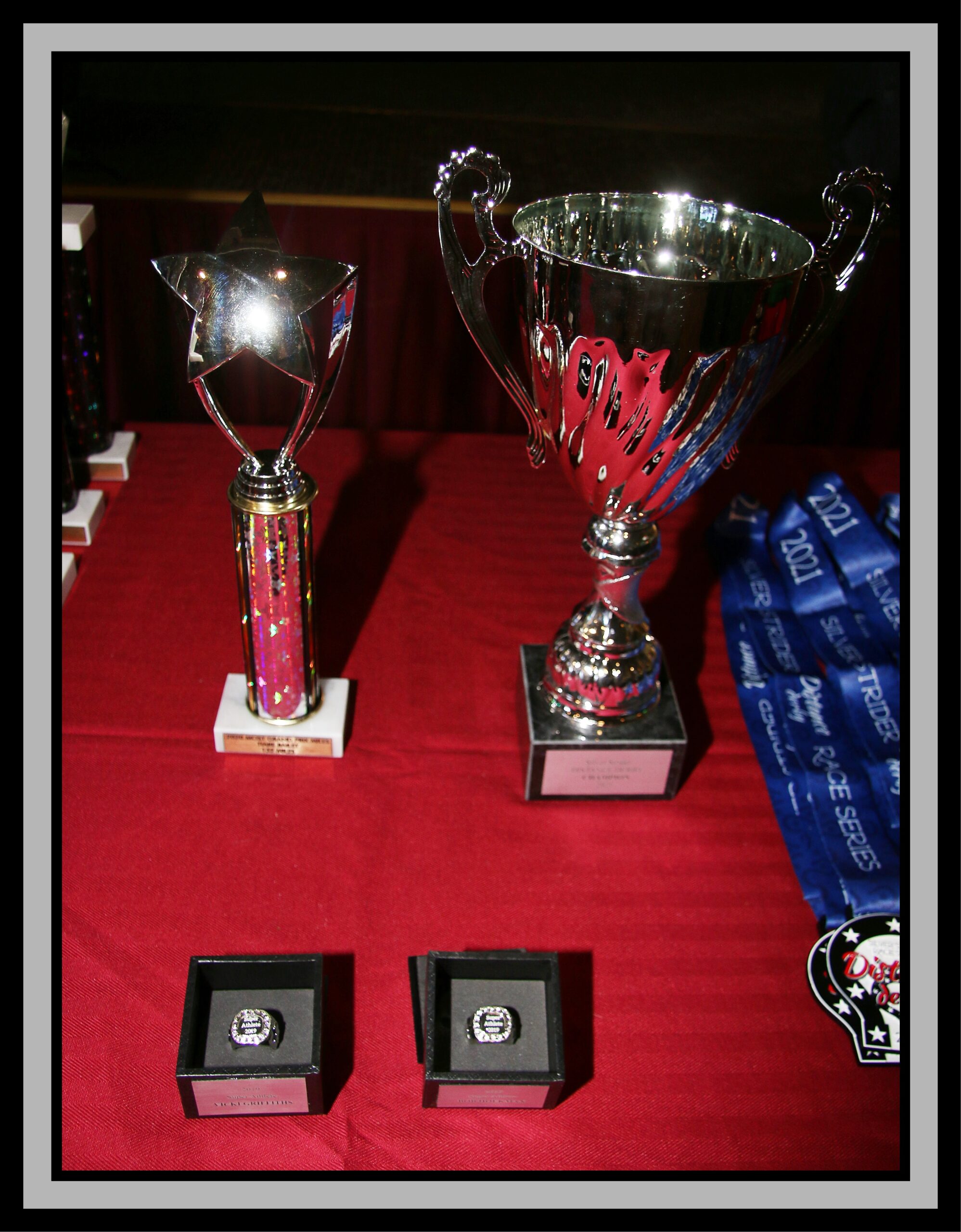 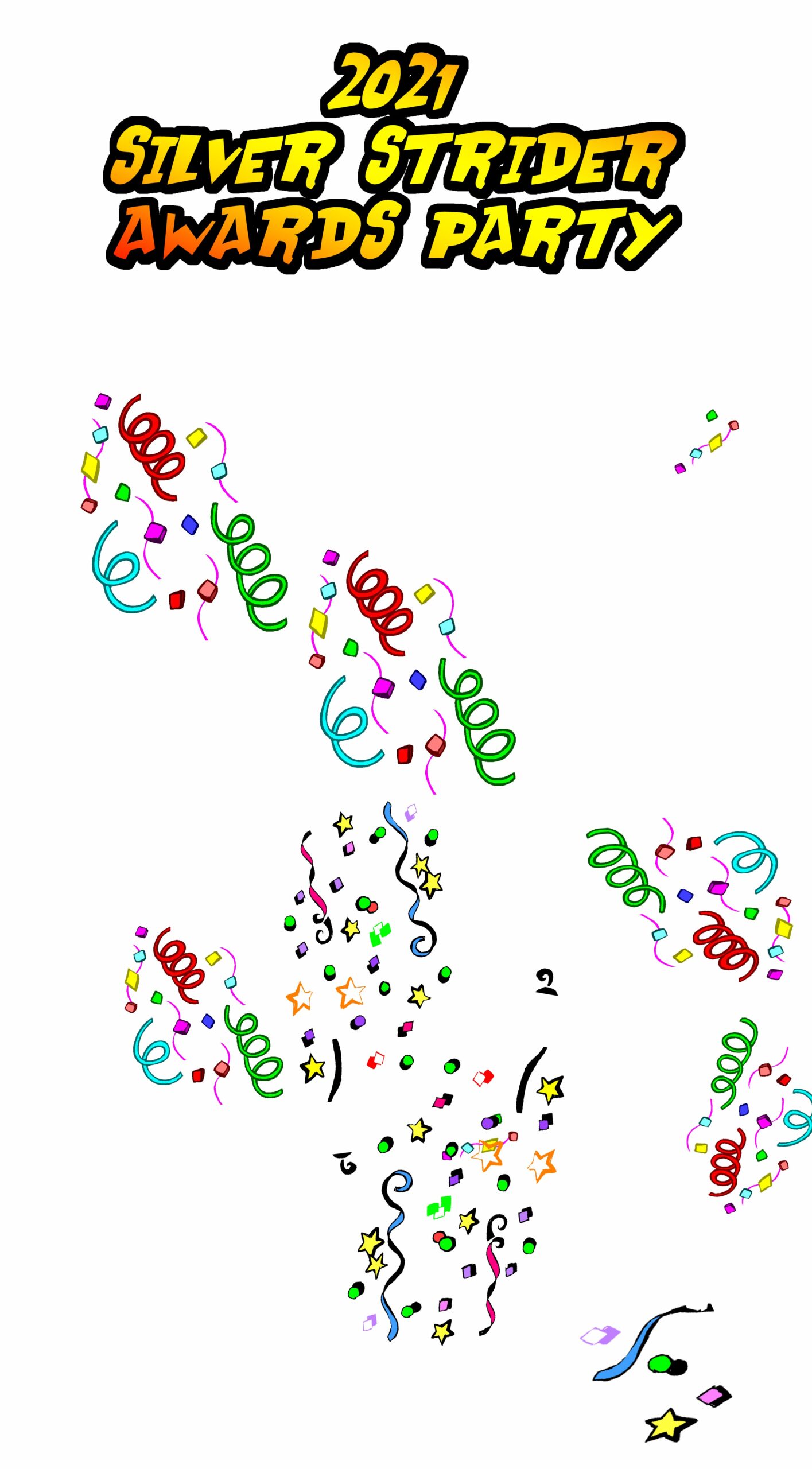 After lunch I opened by mentioning that our last awards party was on January 11th, 2020. Only one month later, Covid struck and most of the races on the Grand Prix schedule went virtual.

I congratulated the Silver Striders for participating in the programs we held to keep us motivated during the long quarantine period.

We began the awards with two belated presentations. Two Super Athletes who missed their ring ceremony 18 months ago were in attendance. Bob Hoekman and Vicki Griffiths were honored and presented with Super Athlete rings for 2019. They also received a gift certificate from South Sound Running.

Next it was announced that Louise Mihay and Dennis Zaborac were the top handicap finishers for the Kent Cornucopia Days 5k. Each received a $50 Gift Certificate from Super Jock n Jill.

The program moved on to the Grand Prix Series awards for 2020. To streamline the program age group presentations included both men and women, except for first place finishers who would be honored separately.

Assisting with the presentations were Diane Martin who presented the trophies and Betty Dietrich who distributed the gift certificates. All finishers, except 1st place winners, received their finishers trophy and a $50 gift certificate from Super Jock n Jill. 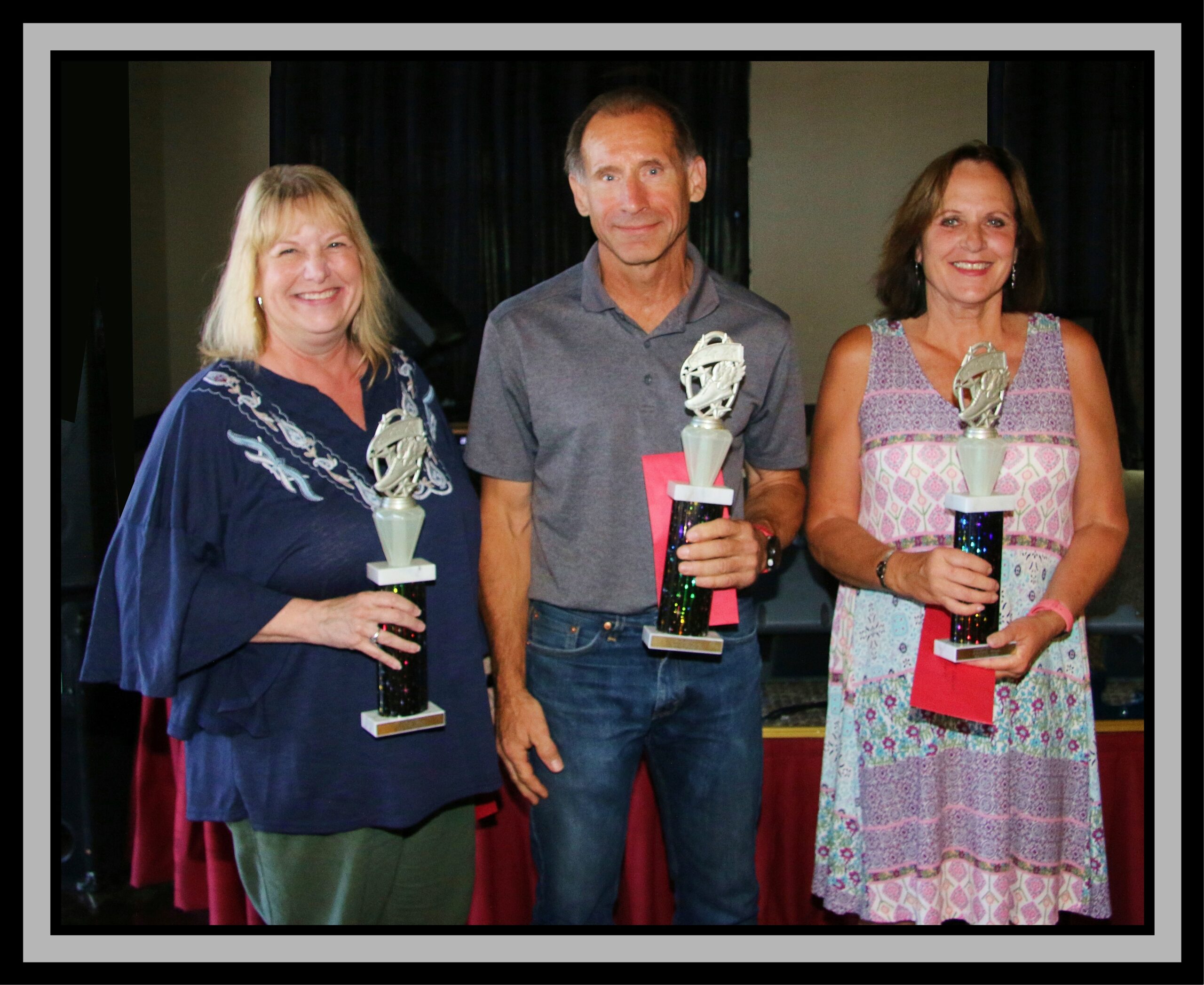 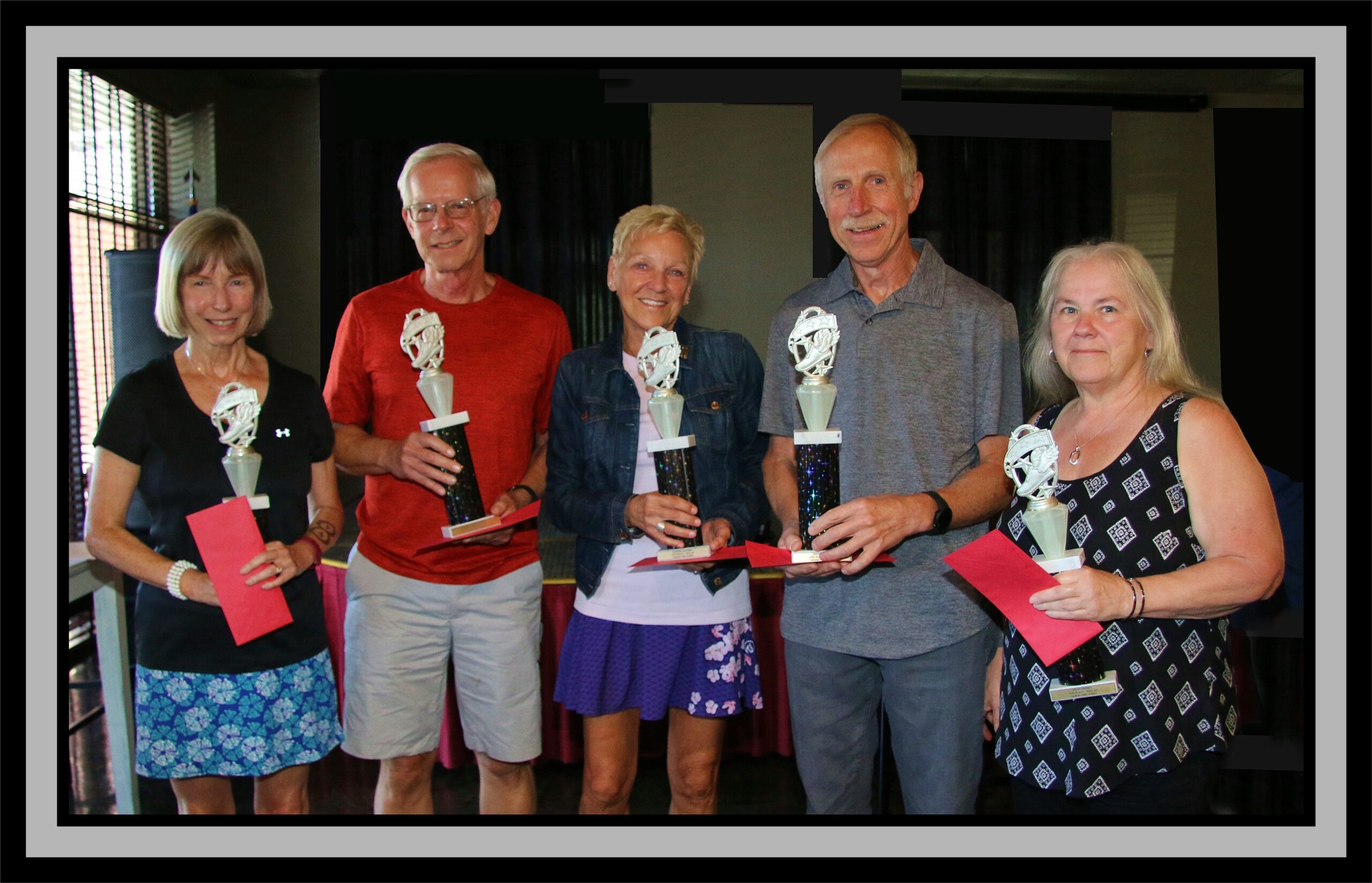 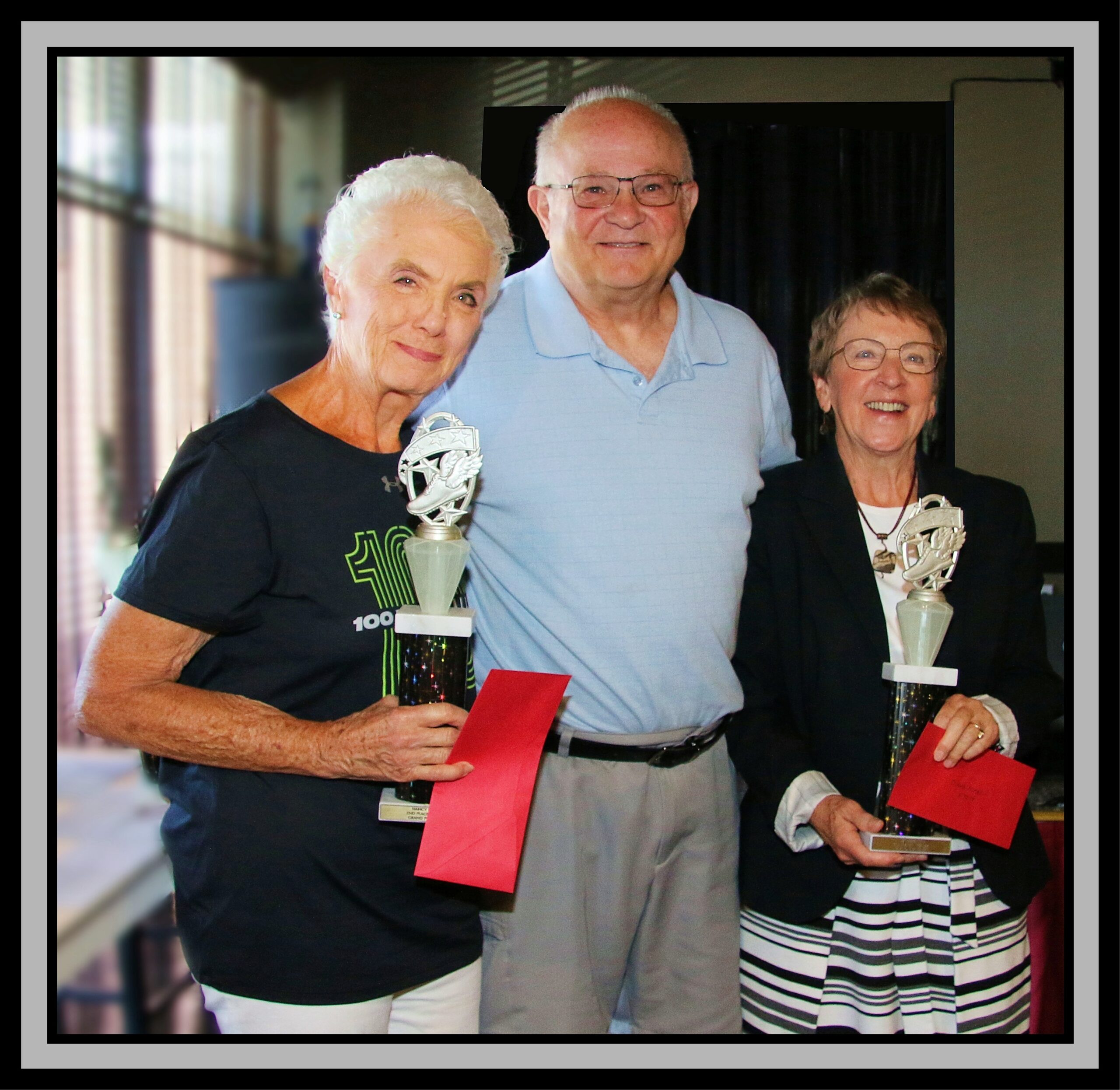 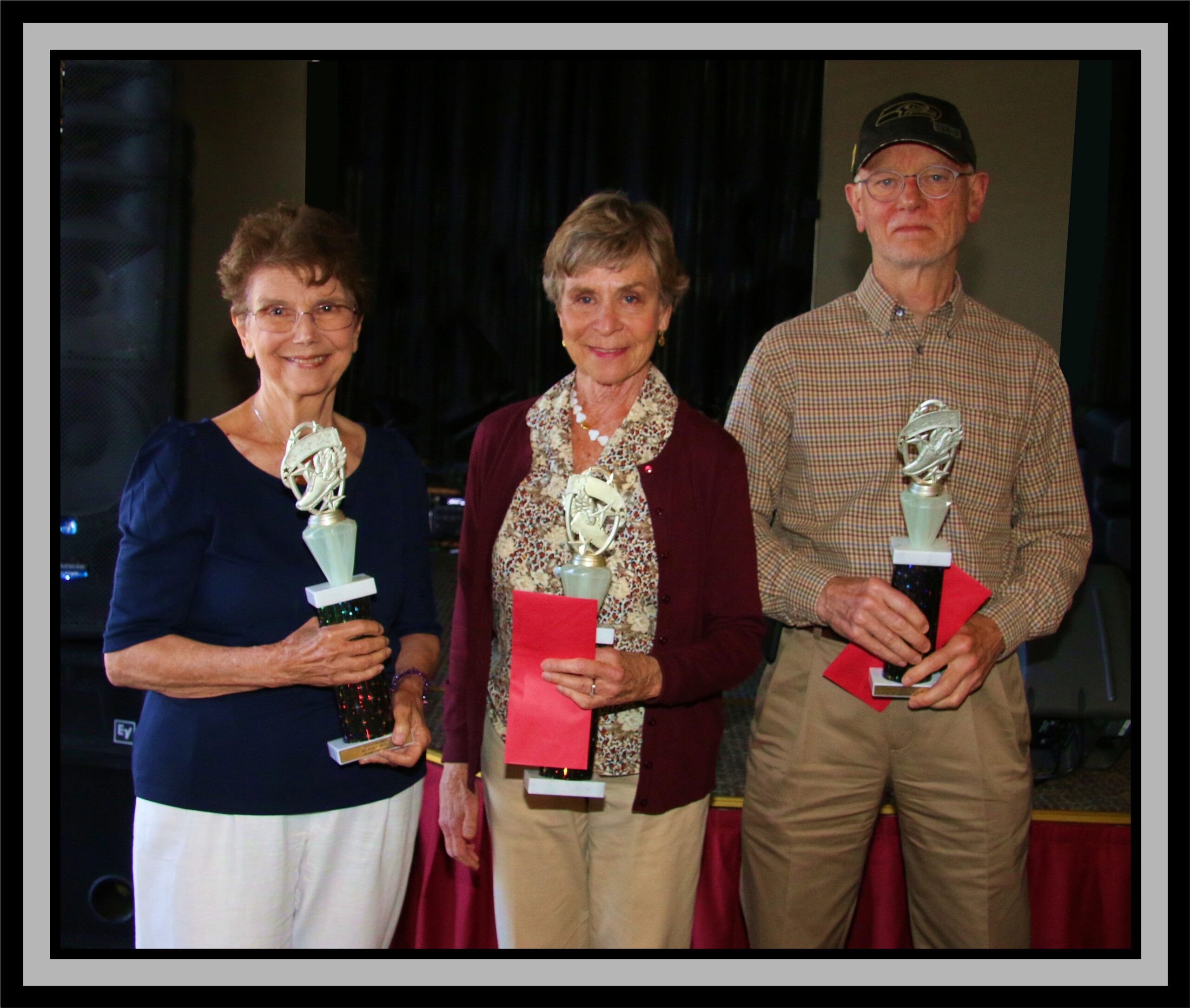 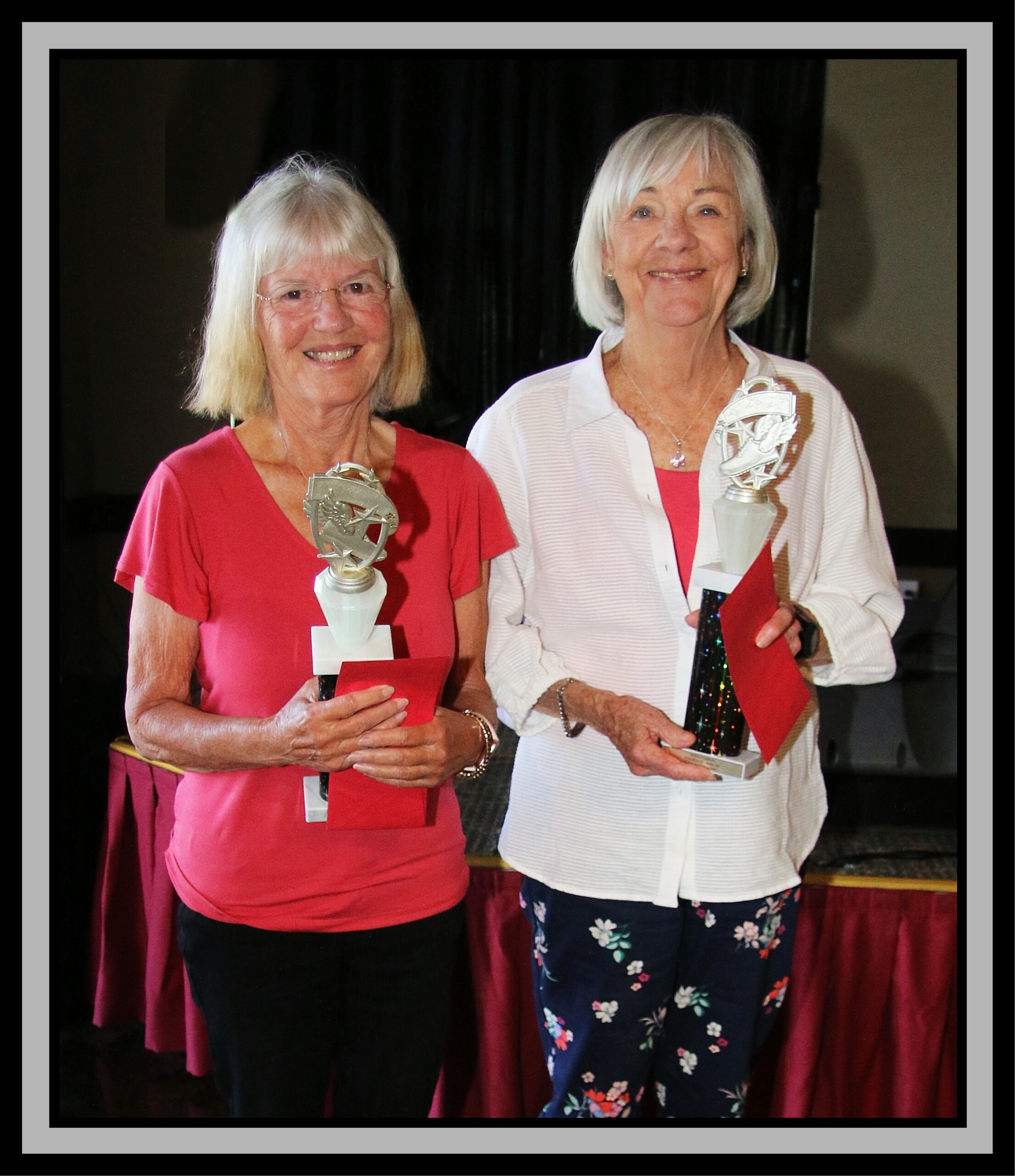 The age division winners received their trophy and a gift certificate for a pair of running shoes from South Sound Running. 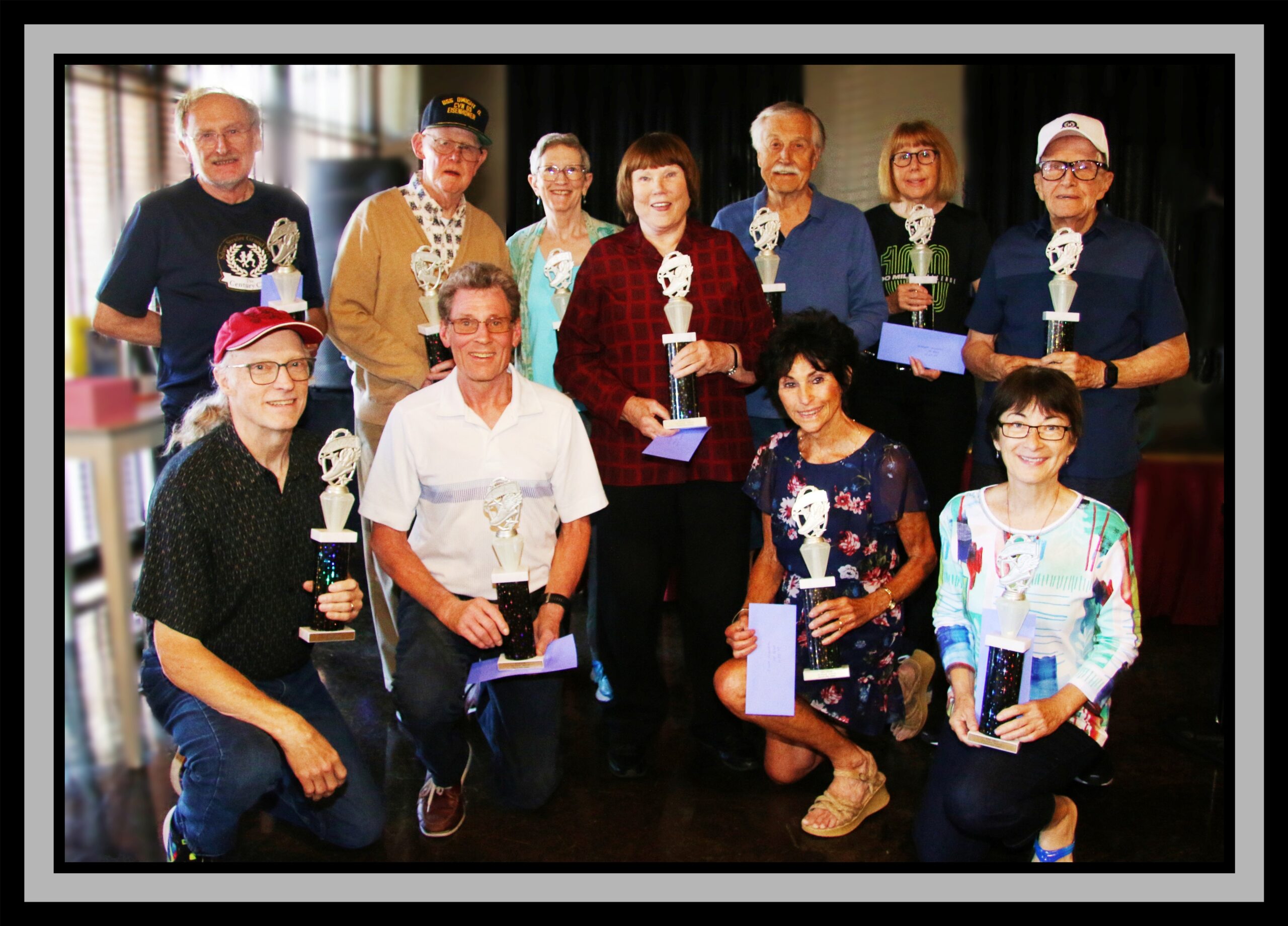 The Grand Prix Series Achievement awards were next. We had some ties and the Grand Prix committee decided to give multiple awards for 2020. 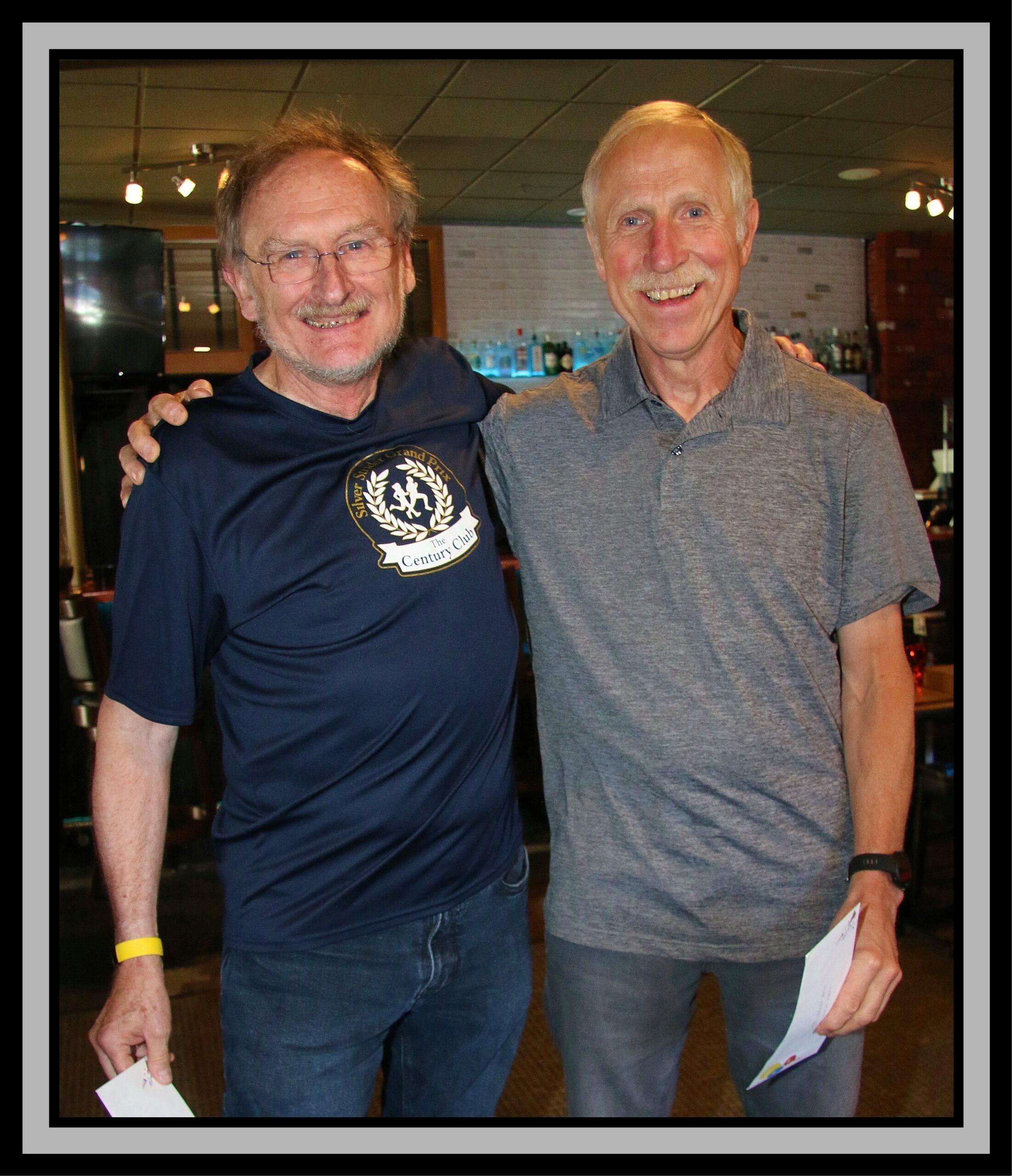 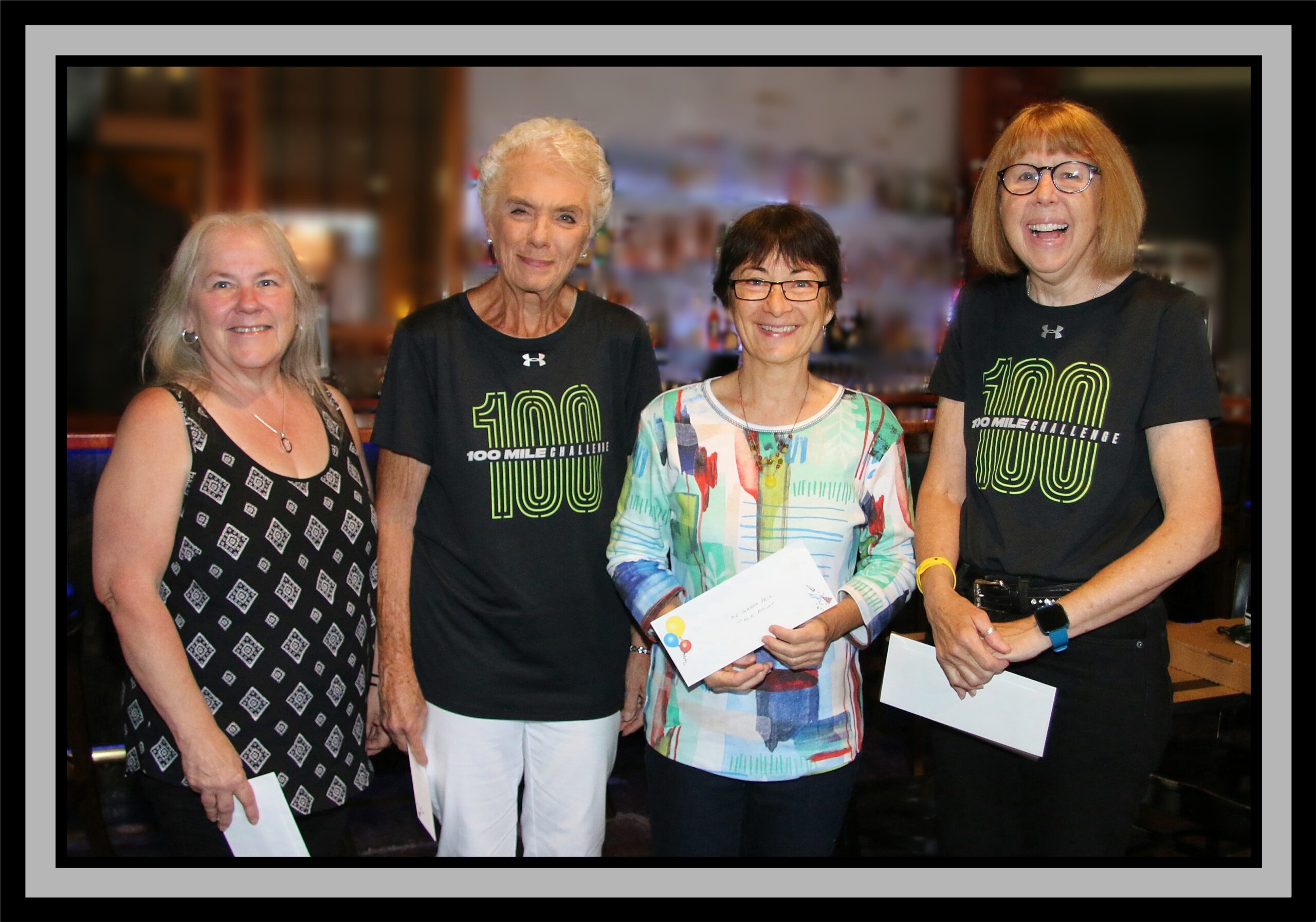 A special trophy was presented to Tiare Bailey for running the highest total mileage for the Series with 132 miles.

Special recognition was give to Karen Lichtenstein, Diane Martin and Charlea Sherman for their contributions to the Silver Strider during the pandemic. Each was presented with a $50 gift certificate. 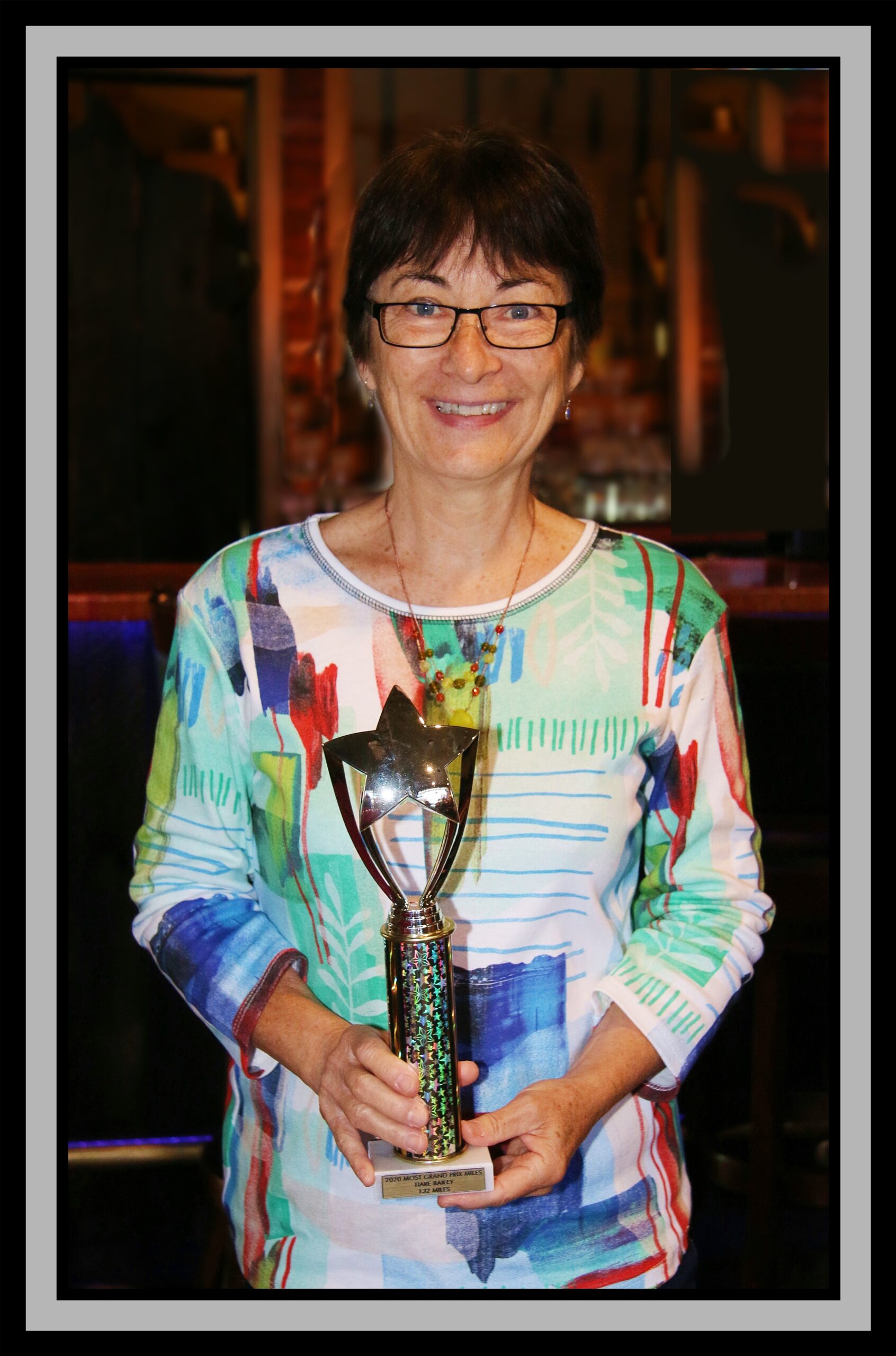 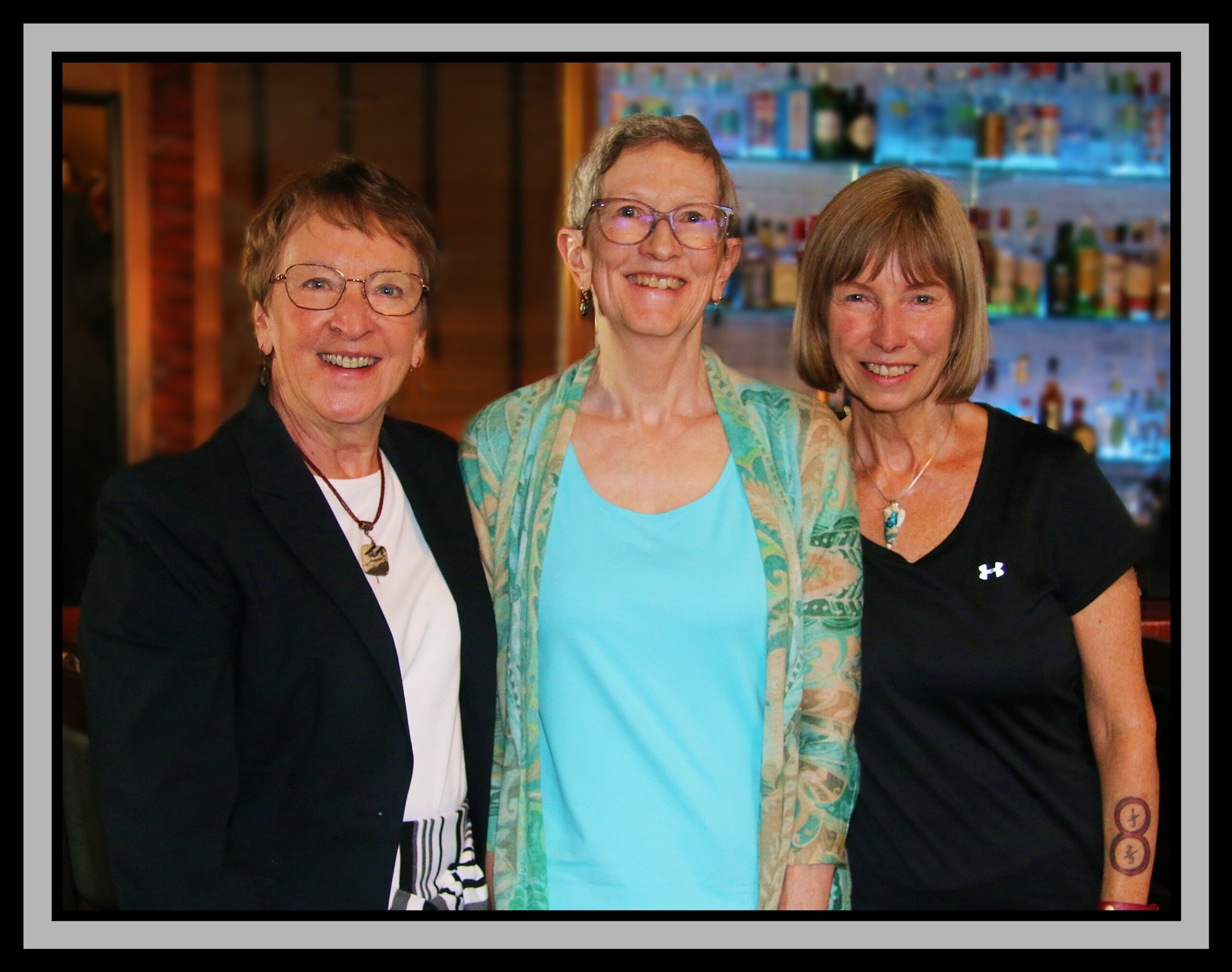 Then it was time to take a break from the awards presentations to hold our drawing. It was conducted by Bruce Fisher.

Charlea and Dave Sherman selected an abundance of items for the prize drawing. As numbers were called out, each winner could choose their own prize. It was a popular way to conduct the drawing. The Godiva Chocolates and Old Baileys were the first to go. 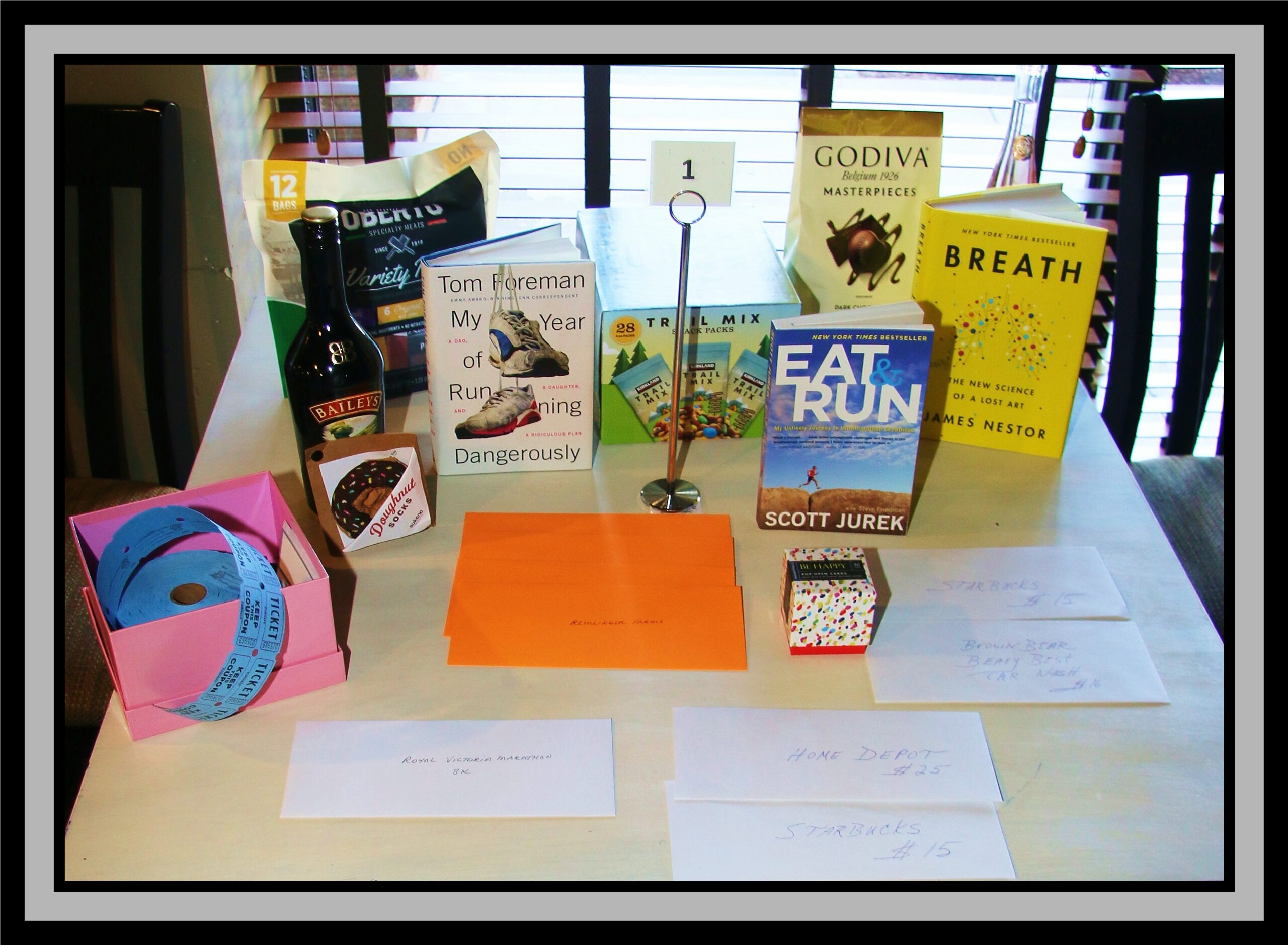 Following the drawings Gretchen Ramsdell delivered an emotional thank you to Nick and Tiare Bailey. The Baileys generously helped Gretchen and Steve to complete the Grand Prix Series and Distance Derby. Nick assisted with their race registration and they both provided running companionship for each race. 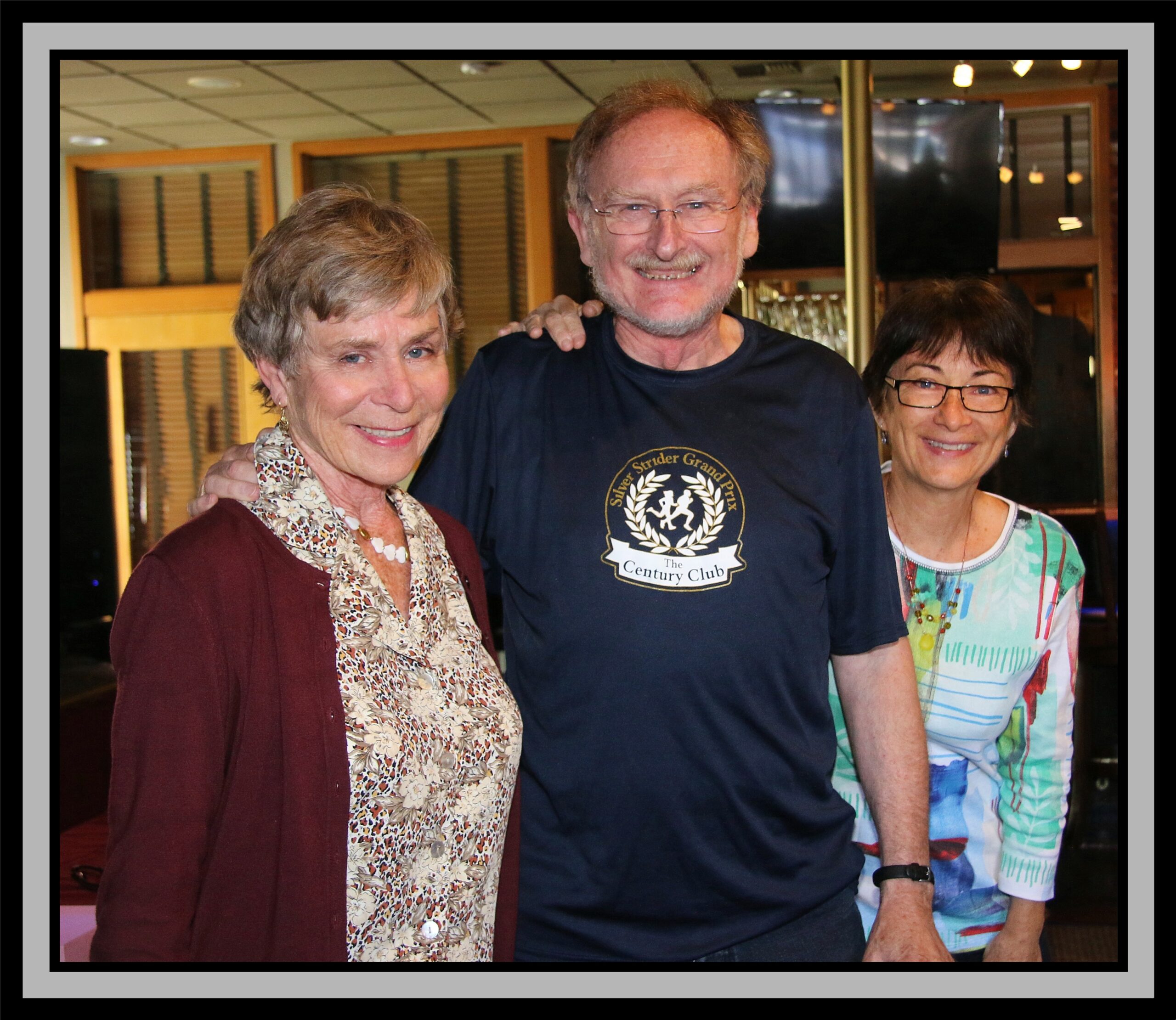 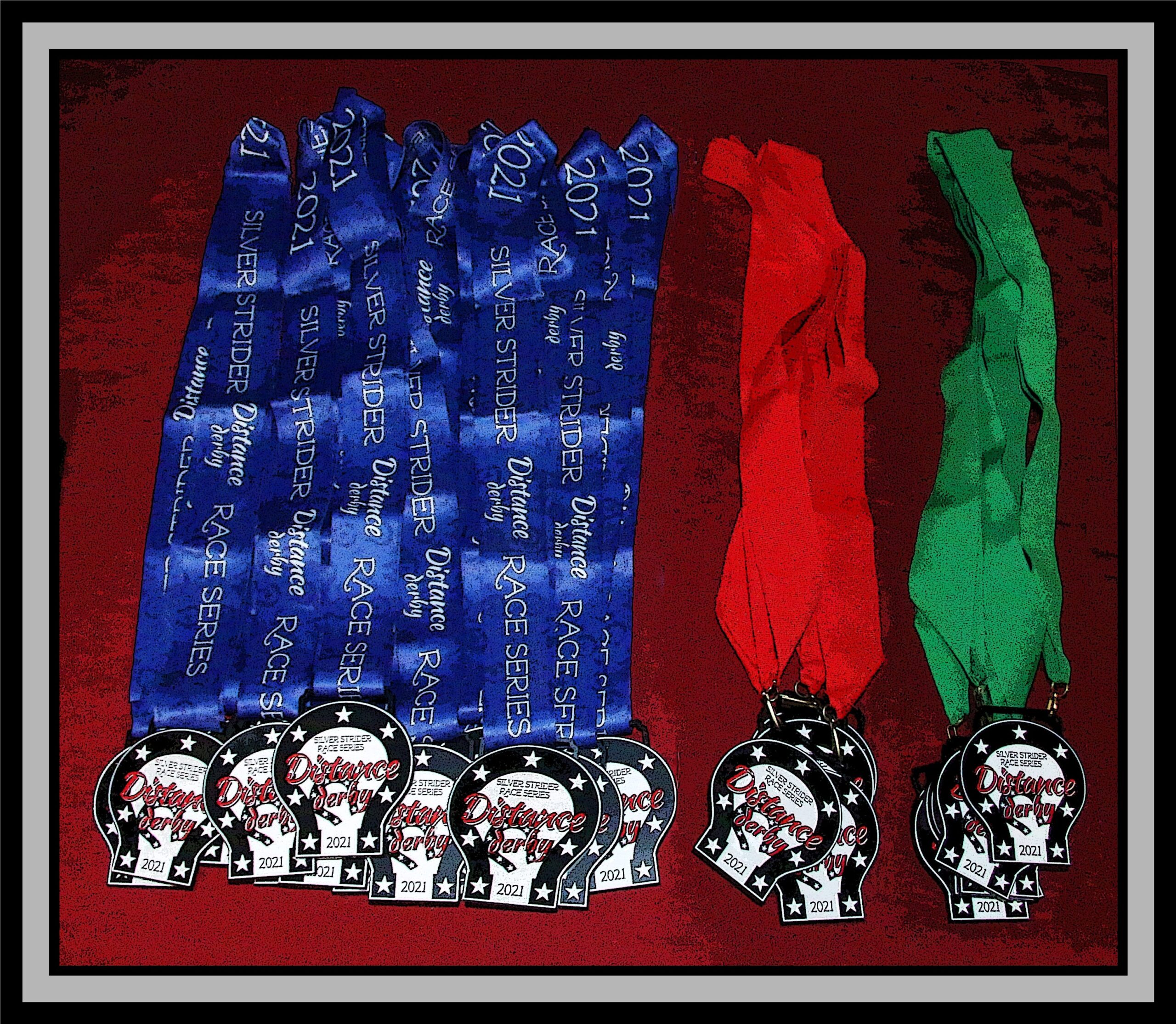 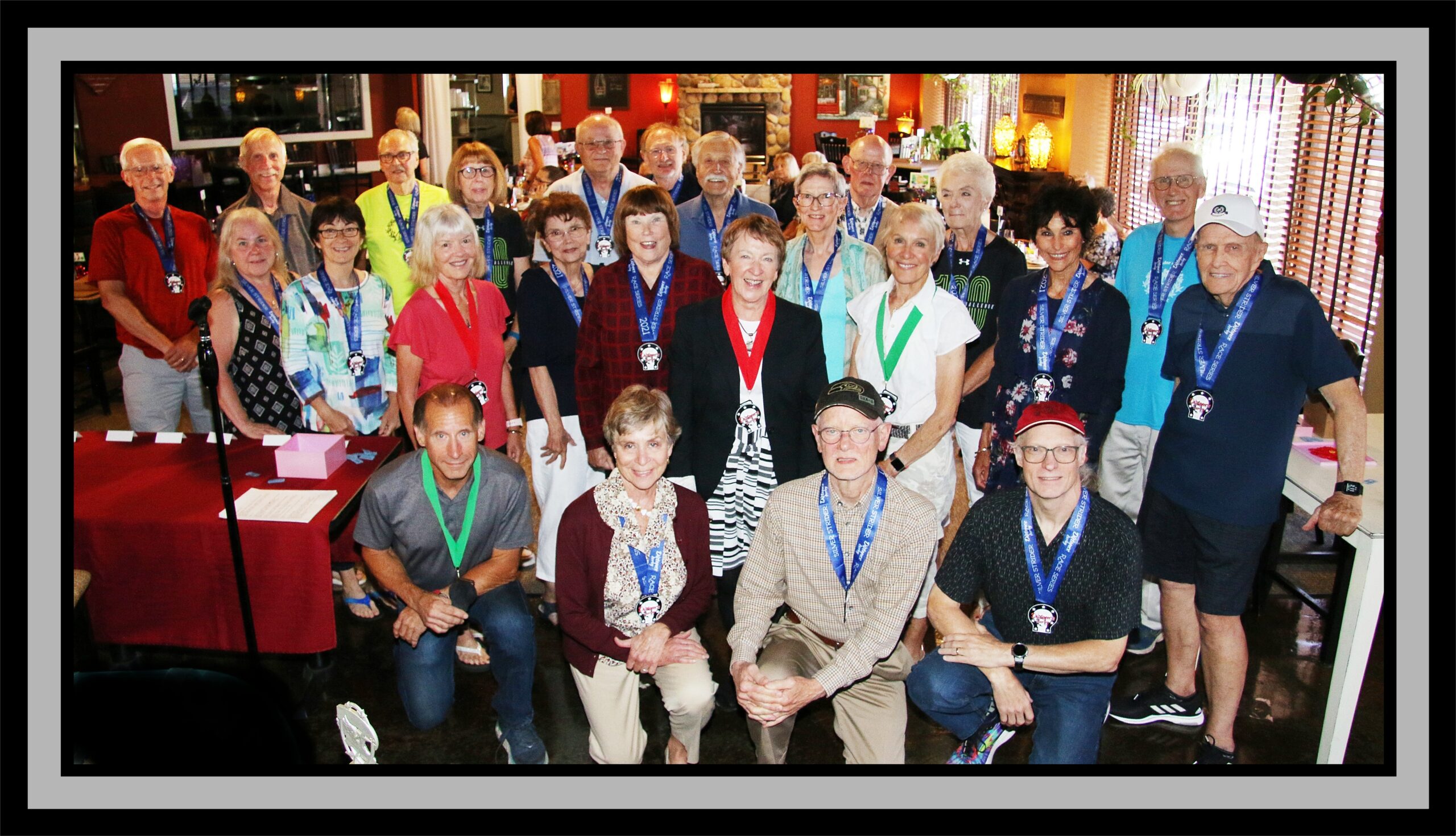 There was a four way tie for the most mileage in the Series. Those tied were, David Anderson, Jim Dollar, Judy Fisher and Arne Hales. They entered every race and selected the longest distance offered including the final race in the Derby – the NODM marathon. They reached a total of 134.3 miles. Each received a $50 gift certificate. 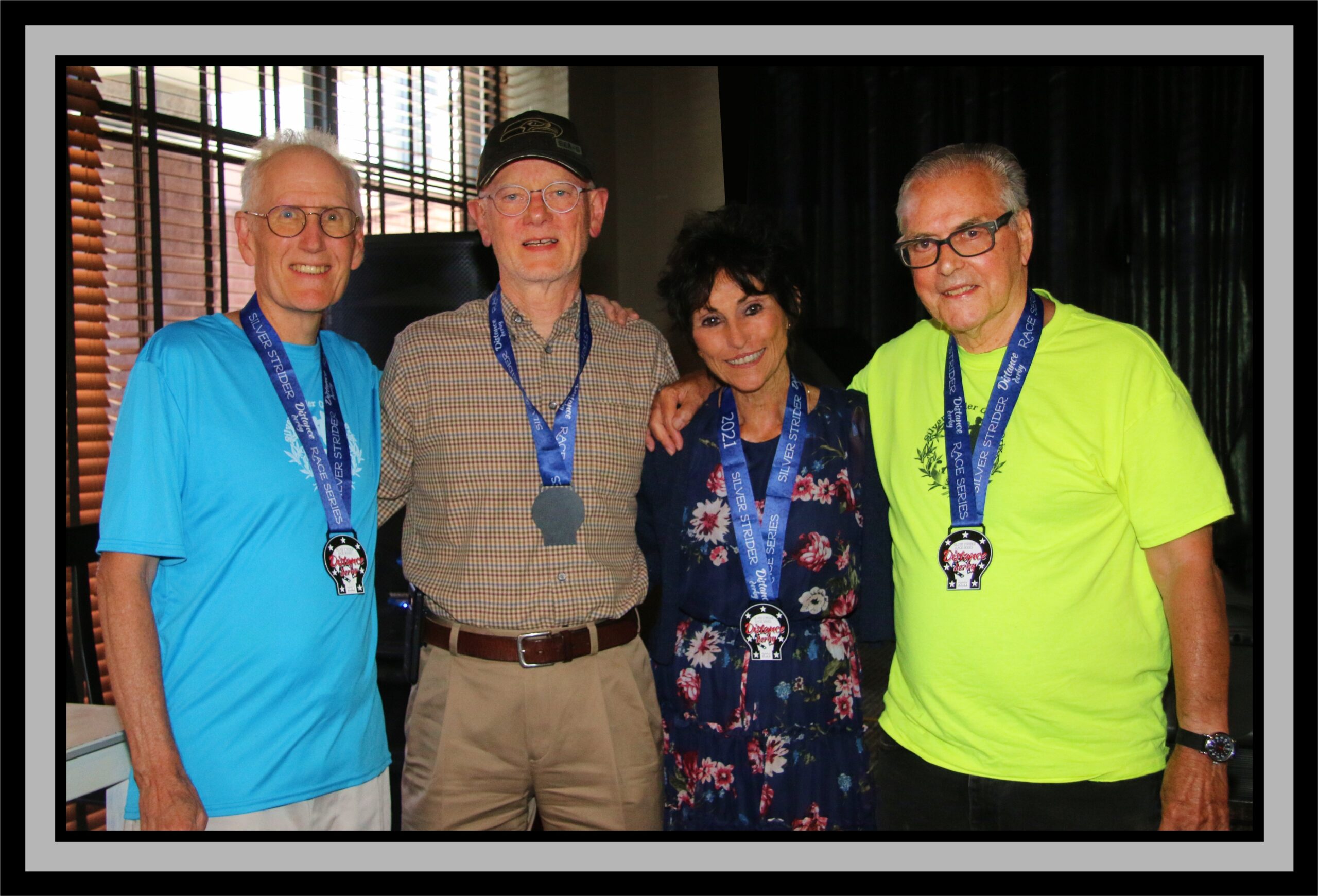 The Distance Derby Championship Cup was to be awarded to the runner with the highest mileage. Since we had a 4 way tie, we had to employ the tiebreaker which gave the cup to the oldest runner. 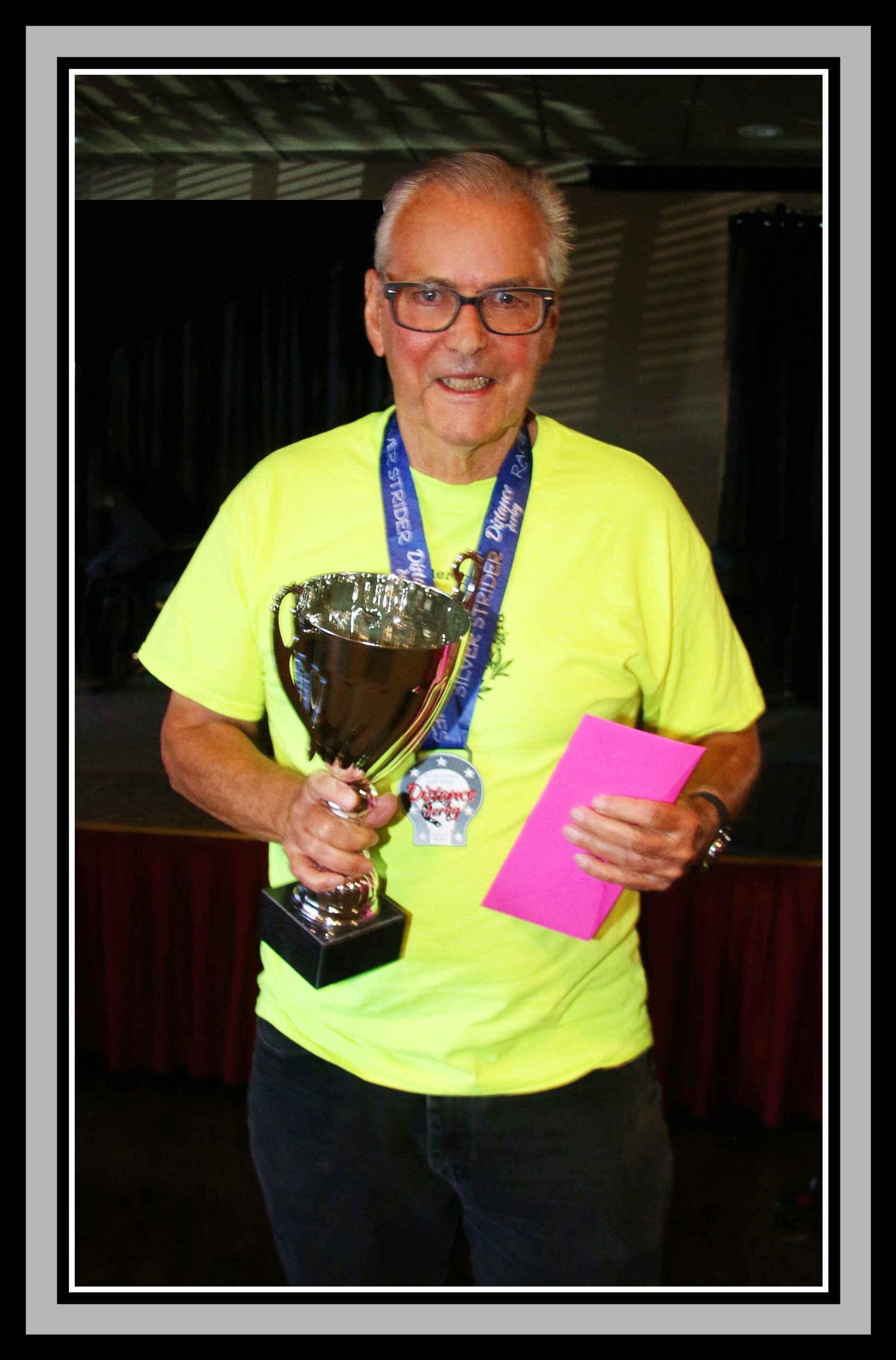 It was a great finish to a wonderful afternoon.

The party was adjourned to the front of the restaurant for an outdoor group photo. 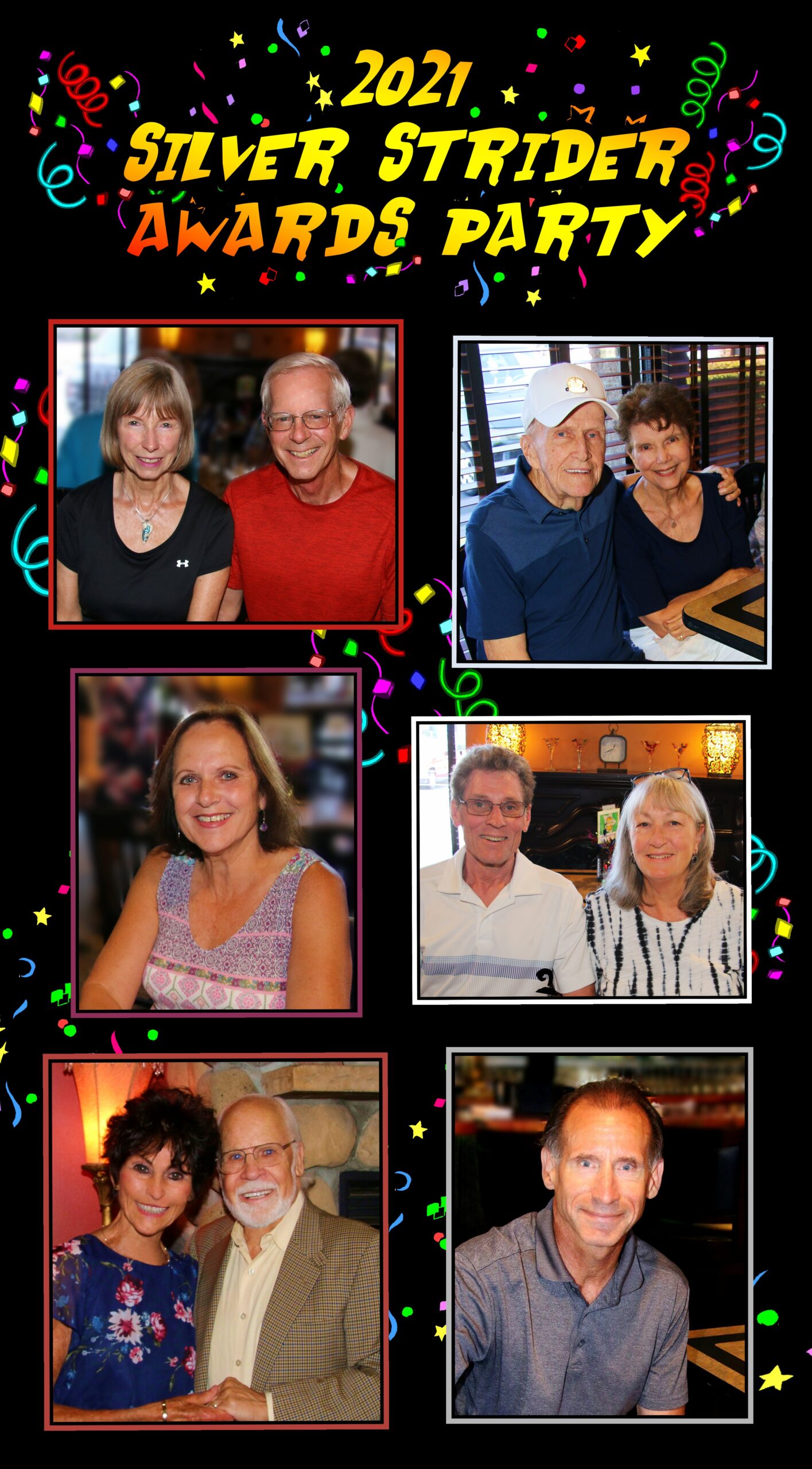 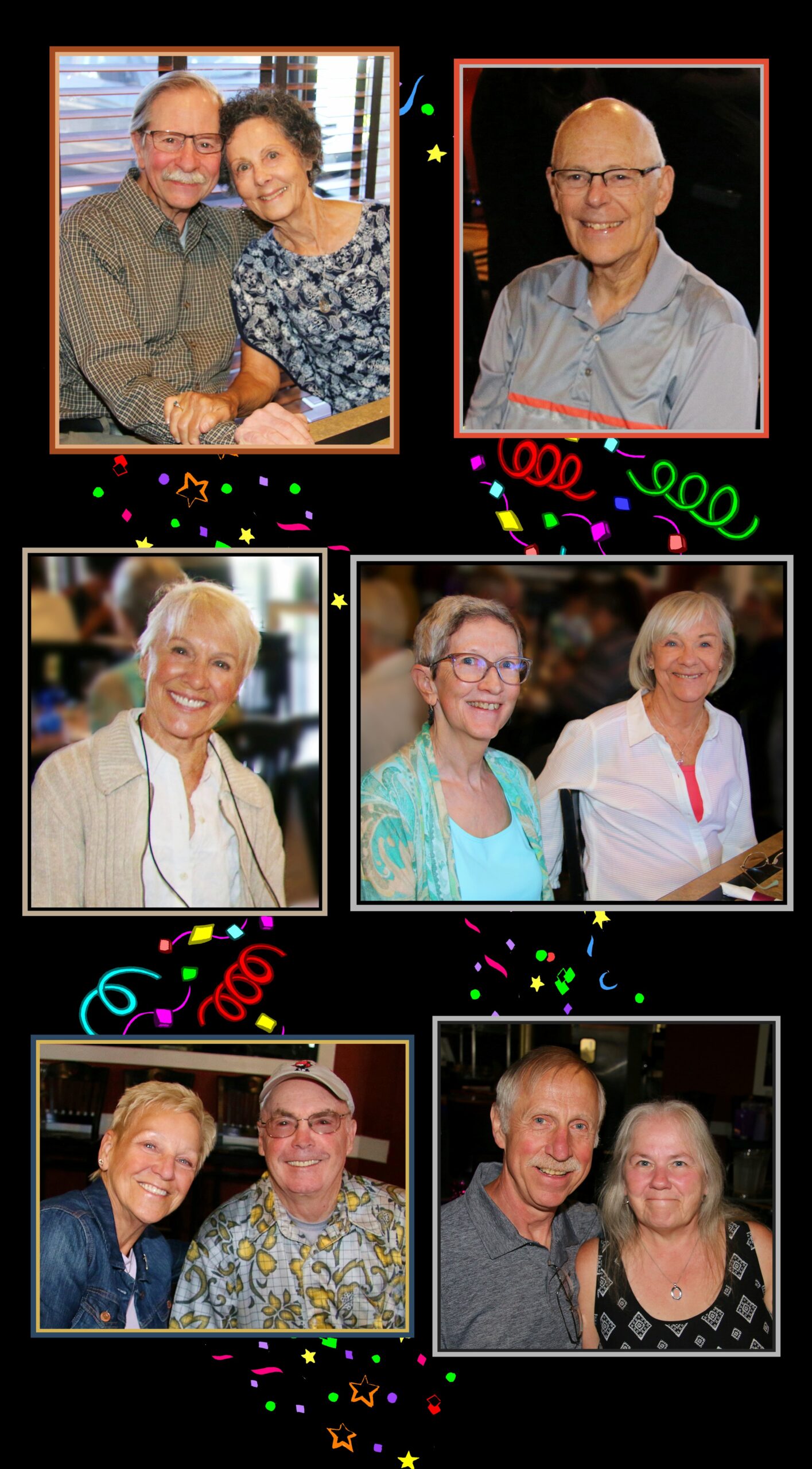 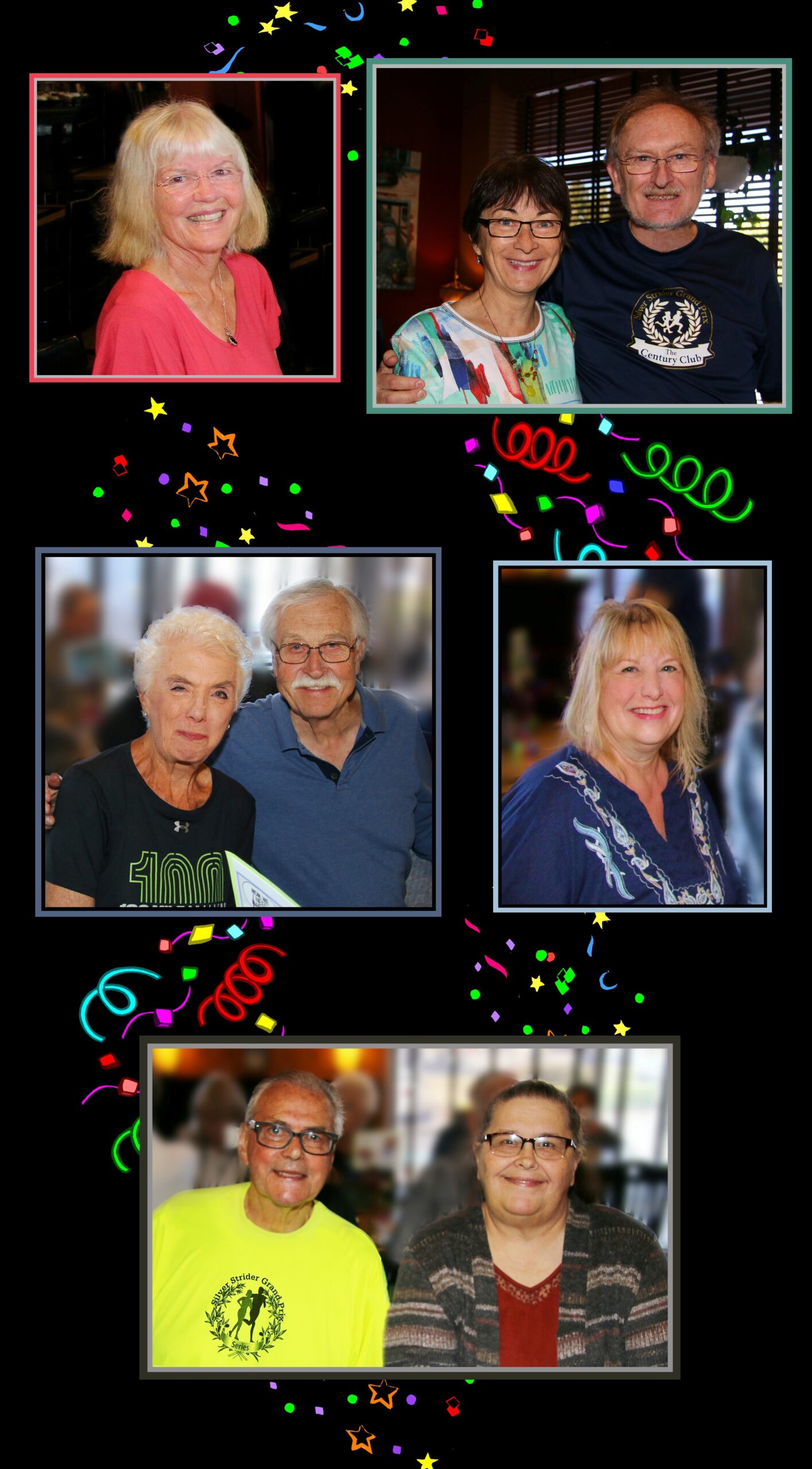 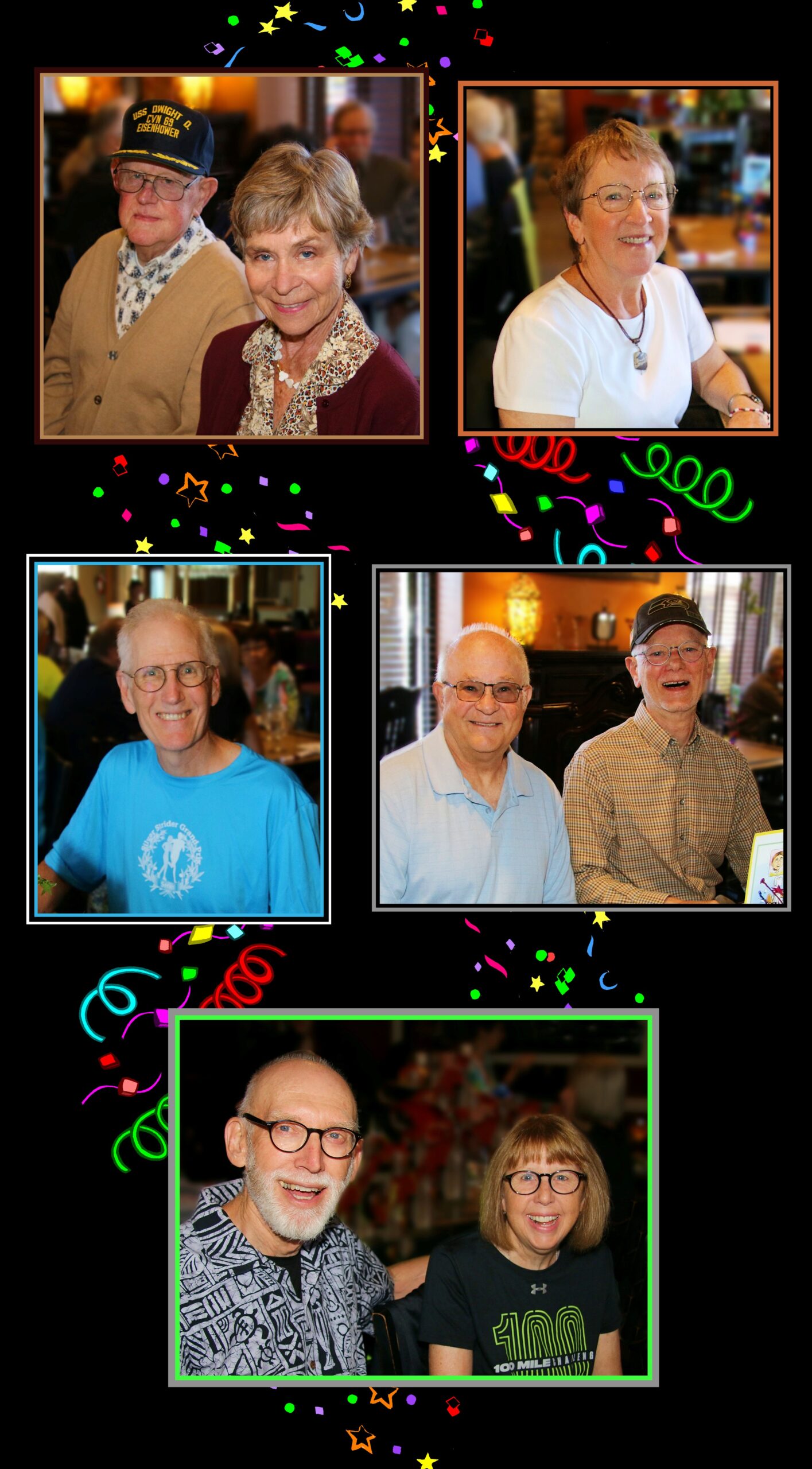 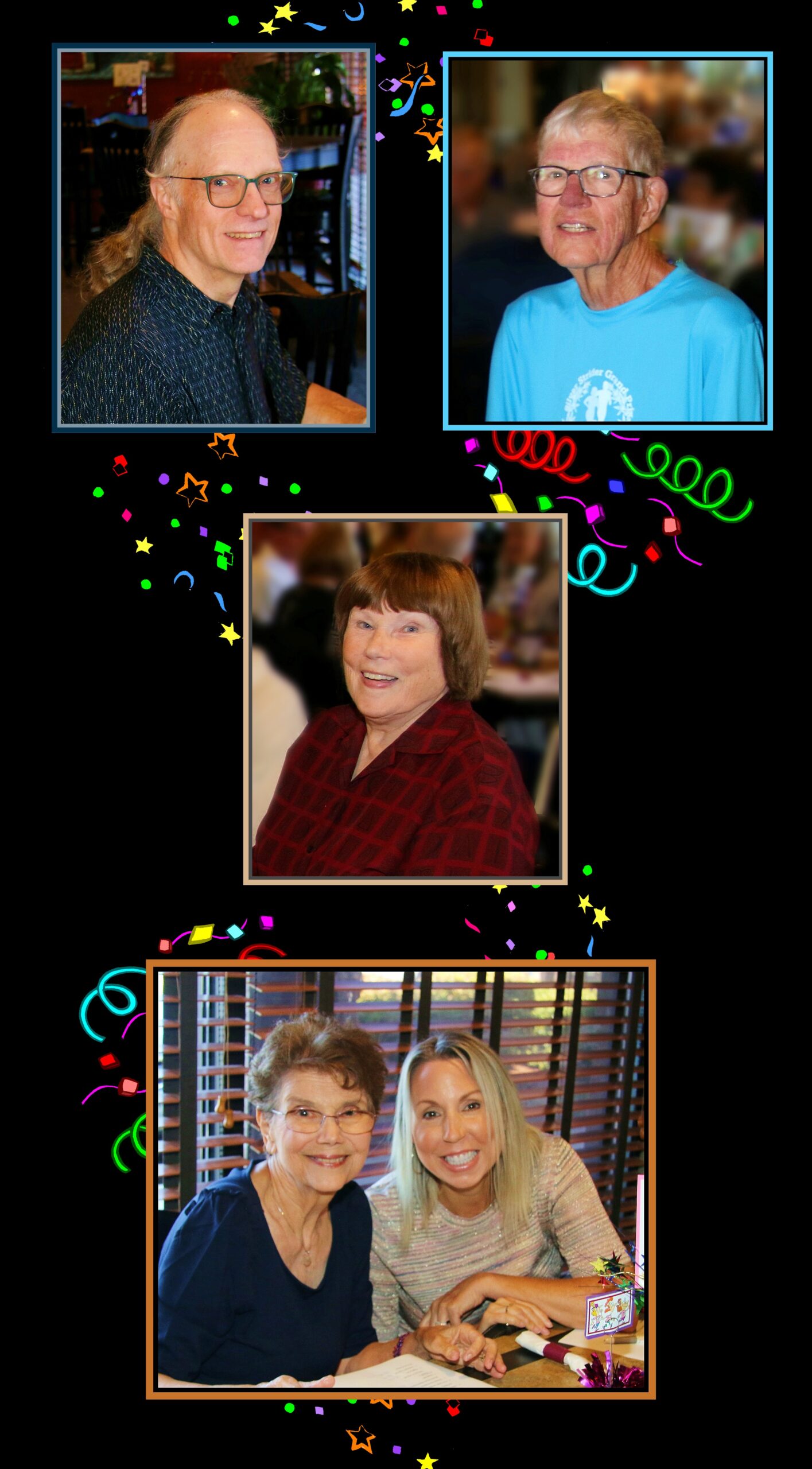 I cannot praise Bruce Fisher enough for his artistry with a camera. How he does the beautiful work appearing in this article and the Kent 5k Race Report is beyond my comprehension. His ability to catch runners in full stride with pleasant facial expressions is truly remarkable. No professional photographer for any race can produce work at the level Bruce give us.
Jerry Dietrich

We loved JoeSeppi’s and the food was great as was the service.  Hope we can go there again.
Louise Mihay
Edythe Hulet

The food and service at Joeseppi’s was spectacular, the service was very very good. Great place! xxxxxxxxxx Diane Johnson

Thanks so much for a wonderful awards party. I really appreciated the comments that you added for the runners as they received their awards. We had excellent attendance at the event, and I was thrilled to see so many Silver Striders after the long pandemic shut down. Joeseppi’s was a perfect location for the party, and the decorations were very clever with lots of jokes.
A great celebration for all of us.
Karen Lichtenstein

It was really great to see everybody. Nice job in arranging the whole affair. Looking forward to the next SS event.
Bruce Fisher

What a pleasant shock to see I came in first at Kent with the handicap.  And thank you for your kind words.  I don’t expect to see another first place finish anytime soon so I am enjoying it while I can.
Louise Mihay

I thought it turned out very well. I want to send a thank you note to the lady you introduced us to yesterday. I felt they did a good job.
Nanci Larsen

Thank you! It was such a surprise to be honored yesterday. The venue was perfect; thanks to your diligence in finding the right place. I think everyone had a great time.
Diane Martin

Thanks so much for inviting me to the banquet today! It’s a pleasure to be a part of this! I’ve totally enjoyed all of it. Thanks for all the special awards, I never expected anything like that!
Ken Peper

Thank you for a wonderful Strider luncheon; likely the most emotional and heartfelt Strider event attended. Being together post pandemic lent a special positive ambiance. Gretchen’s grateful acknowledgment of the Bailey’s friendship brought tears to everyone’s eyes. We needed that luncheon and we need each other. Friendships have flourished among the group and the personal support is a beautiful thing.
Sandy Madden